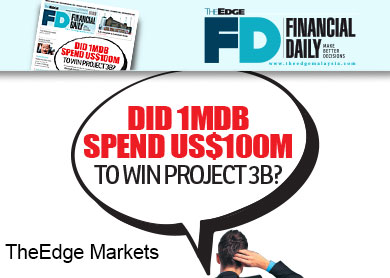 KUALA LUMPUR: The consortium of 1Malaysia Development Bhd (1MDB) and Mitsui Co Ltd of Japan is planning to recover as much as US$100 million (RM325 million) in “development costs” that it is said to have incurred in winning the controversial Project 3B tender.

The amount will be extracted from the consortium’s 70:30 owned subsidiary, Jimah East Power Sdn Bhd, following the issuance of some RM8.4 billion sukuk that is supposed to fund the development, design and construction of the 2x1,000MW coal-fired power plant in Jimah, Negeri Sembilan.

And in the appendices of the IM, it was listed that Jimah East Power is scheduled to pay RM325 million in “development costs payable to initial sponsors” by the end of this month.

This would mean more than one-third of the first RM1.1 billion tranche of sukuk raised by Jimah East Power could be paid to the 1MDB-Mitsui consortium.

The first RM1.1 billion tranche has not been issued to the market to date, although documents sighted by The Edge Financial Daily point to an Oct 28, 2014 issuance date.

The second tranche of RM7.4 billion is scheduled to be issued by the end of next month.

Sources said AmInvestment is in the midst of accepting initial orders on the first tranche.

The RM8.4 billion sukuk, which has been assigned an AA-IS rating by Malaysian Rating Corp Bhd, is expected to be fully subscribed by investment banks, which will subsequently sell it in the secondary market.

The rating agency’s initial credit analysis report, however, made no mention of the RM325 million payment to 1MDB and Mitsui. It declined to comment when contacted.

To recap, the average profit rate for the sukuk is 6.27% for the entire RM8.4 billion issuance. The issuance is broken in several sub-tranches, with maturities ranging from 5½ years to 23 years.

The first RM1.1 billion issuance alone has target profit rates ranging from 5.13% to 5.6% for maturities of 5.5 years to 9.5 years respectively, which is quite attractive, a fund manager told the daily.

While the issuance as a whole will be serviced by the plant’s operating cash flow from October 2018 onwards, potential subscribers for the sukuk may be wondering why such a large sum of cash is being extracted from Jimah East Power by 1MDB.

“The term ‘development costs’ is very vague and could mean anything. But if 1MDB is taking the cash and subsequently injecting equity into the project, it would be basically borrowing money from the bondholders to finance its equity interest in Jimah East Power,” said an industry player.

“This means that the actual debt to equity ratio could be higher than the 80:20 that appears on paper and the bondholders will bear the risk,” he said.

Project 3B has been under public scrutiny for the way it was awarded to the 1MDB-Mitsui consortium by Tenaga Nasional Bhd. The plan to recover the “development costs” now raises questions why the consortium had spent such a hefty sum to secure the project, and why it is trying to recover the estimated RM325 million in cash from its own subsidiary.

It isn’t clear what the development costs incurred by 1MDB and Mitsui entail, but checks indicate other bidders for the project only spent more than US$5 million to assemble and submit their bids for the project.

Jimah East Power is expected to be injected into 1MDB’s soon-to-be-listed unit, 1MDB Energy Group Bhd. Post-listing, 1MDB is expected to pare down its stake in the listed company to less than 50% and 1MDB Energy may no longer be a subsidiary of 1MDB, and the cash of the two entities will have to be separated.

This article first appeared in The Edge Financial Daily, on October 30, 2014.