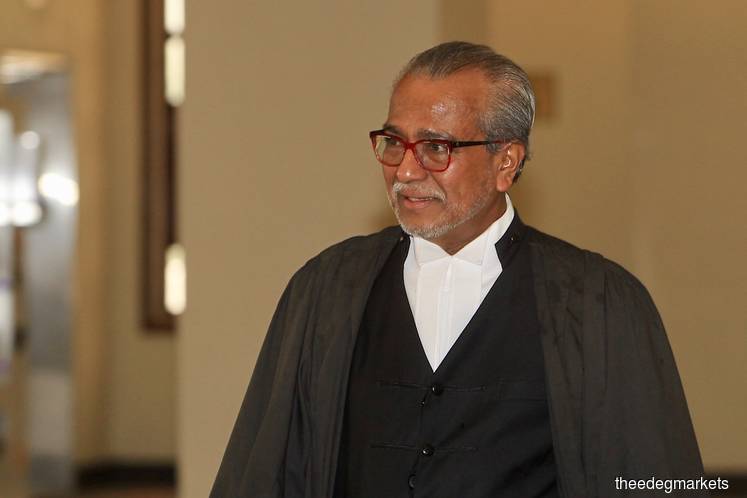 On May 27, 2009, two companies linked to the fugitive financier acted as secondary subscribers to the strategic development fund's RM5 billion Islamic Medium Term Notes (IMTN) and subscribed to RM4.5 billion at a discount via AmBank.

Shafee referred to the letter from AmBank to Aktis dated May 27, 2009, which confirmed that the net payable amount to Aktis was RM74.62 million.

According to the letter, Aktis had subscribed to RM700 million worth at a discounted RM617 million. Aktis then appointed AmBank as a placement agent, which had then helped the company dispose of the bonds at par value.

"Who were the losers of this deal? One is 1MDB, as they could have made that gain for themselves. AmBank only made the fees of about RM70,000. But we don't know who was conspiring in AmBank," said Shafee.

"Some people arranged in Aktis for the discounted sale (in order) for Jho Low's outfit to make money.

"Malaysians got screwed twice as the bonds were sold at a discount and then sold at a higher value to Malaysian institutions — Employees Provident Fund (EPF), Social Security Organisation (SOCSO) and insurance companies (operating locally)," said Shafee.

Separately, Country Group bought a portion of the bond and resold it — through AmBank — at face value of around RM3.8 billion, to gain approximately RM420 million.

All this happened on the same day AmBank helped 1MDB to issue the RM5 billion bonds, according to documents shown by Shafee in court.

The question, Shafee raised, is why AmBank did not make that killing itself.

AmBank, too, could have made hundreds of millions of ringgit by subscribing to the discounted bond and selling it at a higher price — and it would have had the upper hand, considering it was lead arranger and primary subscriber.

On Oct 10, 2009, Teng Chean Choy, an officer in AmBank, had told 1MDB board of directors during a meeting that the discount was to ensure full subscription considering poor market appetite.

The controversial bond issuance ended up resulting in a series of boardroom changes in 1MDB (then known as Terengganu Investment Authority), after which its original shareholder — the Terengganu state government — ceded ownership and let Putrajaya take over the fund.

Najib, who was then prime minister, finance minister and chairman of 1MDB board of advisers, is currently facing criminal charges on the alleged embezzlement of billions of ringgit from its funds. The trial continues.