Abu Dhabi reaches out to M’sia 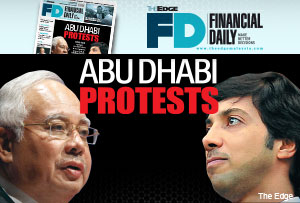 “Sheikh Mansour (Zayed Al Nahyan) has sent a letter to the Malaysian prime minister on this,” a source familiar with the matter told The Edge Financial Daily.

Whether or not the EPF can vote in the mega bank merger has been a hot topic of debate in the industry.

The EPF is keen on voting in any eventual deal to protect its investments.

However, certain Bursa Malaysia listing rules prevent the EPF from being able to vote as it is a substantial shareholder of all three parties. It is the single largest shareholder of RHBCap and MBSB with its 41.5% and 64.6% stakes, respectively, and holds a 14.6% stake in CIMB Group.

RHBCap and MBSB have, at the EPF’s request, written to Bursa to put forward EPF’s request for a waiver from the listing rules.

The Edge Financial Daily reported on Aug 22, quoting sources, that the proposed merger scheme was for CIMB Group to sell its entire banking business to RHBCap and for the deal to be paid via an issuance of new RHBCap shares.

Under that scenario, the EPF’s vote is crucial because as the buyer of the assets and liabilities of another banking group, RHBCap only needs a 50%-plus-one share approval for the deal compared to the selling party, which would need a 75% vote.

Aside from the Middle Eastern investor, OSK Holdings Bhd also has a 9.9% stake in RHBCap and would hold an important vote as well.

It is no secret that Aabar could be a stumbling block to any merger, given that it is seeking a high price of RM12 per share for its shares in RHBCap.

It bought the shares in 2011 from sister company Abu Dhabi Commercial Bank (ADCB) for RM10.80 a share. However, sources said Aabar’s total investment cost is closer to RM12 a share as it has to take into account the interest expense to fund its investment. ADCB, owned by the Abu Dhabi government, made a tremendous gain from the stake sale to Aabar as it acquired the shares in 2008 at just RM7.20 apiece. RHB shares, which closed at RM8.87 yesterday, have not crossed the RM10 level in over five years.

In a recent interview with The Edge weekly, EPF chief executive officer Datuk Shahril Ridza Ridzuan pointed out that the fund has substantial stakes in over 100 companies in the Malaysian market, and hence, it is important for it to vote to protect its investments.

“If we cannot have voting rights in these institutions (big banks, plantations companies, etc) and they try to do deals with each other, it is very dangerous for us. [If there is] any merger in the banking sector, we will be cut out if we cannot vote because we own stakes in all the banks — Maybank, AmBank, etc — so what do we do?” he  remarked.

These include investments in the Tun Razak Exchange and Bandar Malaysia.

It was also agreed, at the time, that Abu Dhabi develop a RM21 billion strategic petroleum reserve facility in Johor with the capacity to store 60 million barrels of crude oil and petroleum for the exclusive use of Abu Dhabi.

To date, however, it is not known how much of these committed funds have actually flowed into the country.

Two months back, The Malaysian Insider reported, quoting sources, that Abu Dhabi, through a special envoy sent to Putrajaya, made it clear that it might not proceed with these investments if the bank merger went through without considering the Middle Eastern nation’s interest.

This article first appeared in The Edge Financial Daily, on September 30, 2014.