After mega rally last year, can Genetec live up to investors’ expectations? 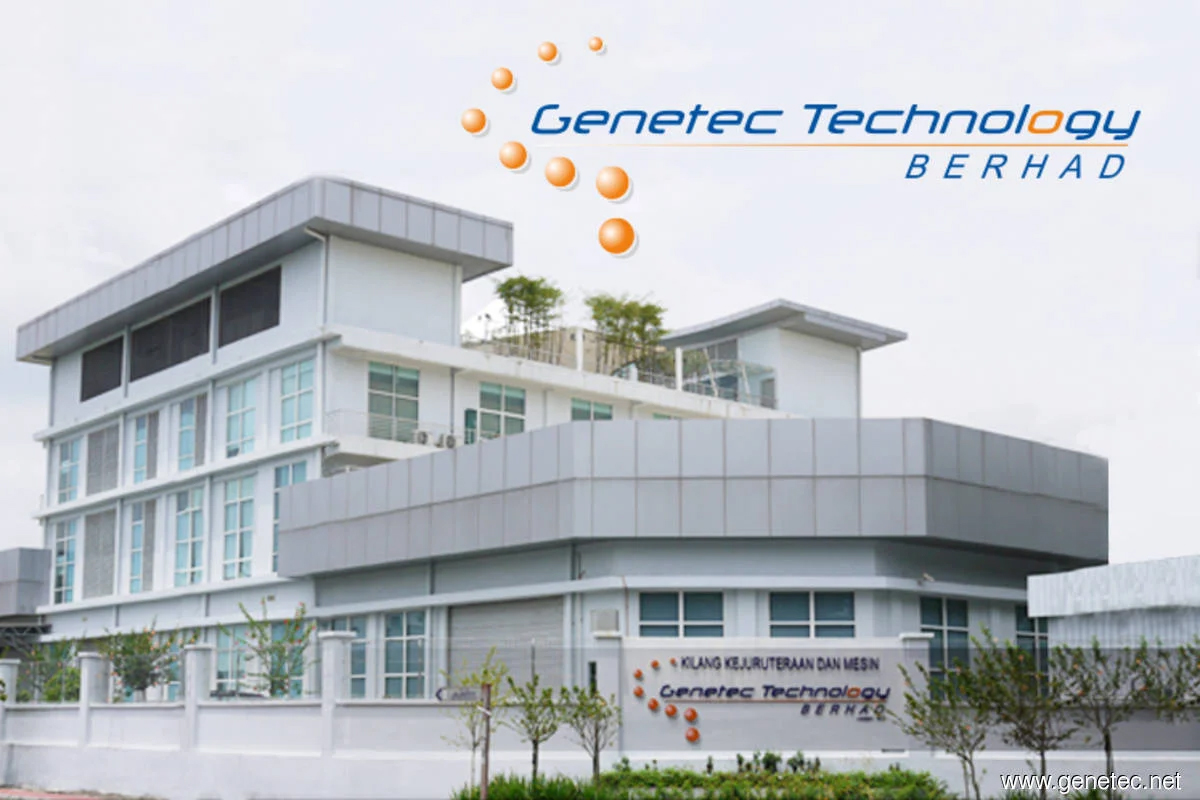 WIDELY perceived as a proxy stock to the trendy electric vehicle (EV) theme, Genetec Technology Bhd insists its operations go beyond trends and that it is here for the long term even if sceptics continue to doubt its longevity following last year’s stratospheric rise in its share price.

The runaway top performer in 2021, the ACE Market-listed industrial automation house was put under the spotlight as its share price multiplied about 20-fold over the space of a year to an astounding RM36 (pre-bonus issue adjustment) in December 2021 from a mere RM1.80 in December 2020 — largely because it had secured battery cell assembly line contracts from a North American automotive and clean energy giant.

But the tech rout in the US has also impacted local companies and Genetec shares have declined by about 30% year to date to close at RM2.30 (post-bonus issue adjustment) last Thursday, which translates into a market capitalisation of RM1.56 billion.

Its record profit of RM56.4 million for financial year ended March 31, 2022 (FY2022) notwithstanding, there are still sceptics who are doubtful about its growth story.

Even in the past, some had warned that Genetec’s valuation was dangerously high, especially when it was trading at a historical price-earnings ratio (PER) of between 100 times and 400 times during its jaw-dropping rally from July to November last year. Many said that the stock was overvalued or overhyped, although, to be fair, the same was said then of many counters in the tech sector.

Currently, after a roller-coaster ride, Genetec is trading at a PER of 28 times, proving the stock has run ahead of its fundamentals.

But the lower PER is also a reflection of Genetec’s stronger earnings in FY2022, mainly driven by strong order books from its EV and energy storage (ES) segment, which made up 85% of group revenue.

Not surprisingly, this has raised another concern — the group’s high, single EV customer concentration risk, and whether it has sufficient capacity to ride on its client’s ambitious expansion plans, which would require more assembly and manufacturing lines for its new EV battery cell factories.

Last month, Genetec announced that it is acquiring a 6.348ha parcel in Bandar Baru Bangi and buildings within the area from Utusan Melayu Malaysia Bhd for RM53 million, in a move to increase capacity to cater for future demand. In an interview with The Edge, managing director and executive director Chin Kem Weng stresses that he wants Genetec to be known as a local technology company and a serious player in the space that can deliver world-class solutions to global companies.

The Edge had a face-to-face meeting with Chin, but he chose to answer the questions put to him in written form.

The 52-year-old started Genetec in 1997, under the name Genetax Technology Sdn Bhd, in Nilai. Since then, it has been serving the local semiconductor and disc drive industries.

Chin maintains that Genetec continues to show steady progress, marked by the addition and expansion of capabilities and offerings.

“We started with machining solutions and moved on to providing customised and intelligent manufacturing automation solutions for high-impact, high-technology industries,” he says.

Genetec’s forays into China, Europe and the US, he points out, demonstrate that it has deep industry knowledge, research and development capabilities, and more importantly, the ability to develop and customise automation solutions for large industries and companies.

“We believe in investing in local talent. From the founding members, senior leadership and staff, many have been with the company for a significant duration. Retention of knowledge and experience is crucial to deliver the quality,” he stresses.

‘We are not a short-term company’

Apart from Chin, another co-founder and major shareholder of Genetec is Aaron Chen Khai Voon, who owns the lion’s share or about 19% in the company. Chen was a non-executive director until his resignation in June 2020.

Interestingly, Chen had last November surfaced as a substantial shareholder of Main Market-listed WZ Satu Bhd with a 5.08% shareholding before raising his stake in the civil engineering and construction firm to 14.12%. He is also one of the main shareholders of PappaRich Group Sdn Bhd, the operator of the PappaRich restaurant chain.

“Aaron Chen is one of our founding shareholders and will remain a long-term shareholder in Genetec,” says Chin, who is the second largest shareholder with a 7.7% stake.

The third substantial shareholder is executive director Tan Moon Teik, who owns about 6%.

Chin reiterates that Genetec has been investing locally to enhance its infrastructure and human capital, especially in training local talent.  “These are not traits of short-term companies. We have also served the automotive industry for more than 16 years, having started in 2006. That knowledge and past experience are important to many of our clients in the industry. We have also been engaging with analysts and institutional investors who believe in us. Their investment in our stock is proof of this confidence,” he explains.

Genetec has 681.96 million in outstanding shares compared with just 45.72 million shares a year ago. The expanded share base was mainly due to a massive 12-for-1 bonus issue that was completed in January this year. In addition, Genetec raised about RM15.4 million from a private placement of 4.572 million shares last year. The exercise was completed in June last year, just ahead of a share price rally. The placees of the shares at RM3.33 and RM3.42 must be laughing all the way to the bank.

Interestingly, on Sept 22, 2021, CGS-CIMB had issued an “add” call on Genetec, with an eye-popping target price of RM50, at a time when the stock was already trading at RM36.

What caught the attention of investors were comments by the research house’s analysts, Walter Aw and Mohd Shanaz Noor Azam, that Tesla Inc — the American technology firm co-founded by Elon Musk — could be a potential customer of Genetec.

Tesla has said that it plans to increase its annual battery cell production rate to 100 gigawatt hour (GWh) in 2022 and 3 terawatt hour (TWh) in 2030. The new EV battery assembly lines are expected to cater to up to 20 GWh per line annually.

Chin declines to confirm or deny that Tesla is indeed a client of Genetec.

“We have been working with a world-leading automaker and pioneer in the electric car market by providing automation lines for their battery-related processes. There is not much to clarify other than — as with all businesses, especially such large-scale ones — there was a very competitive and comprehensive bidding and pitching process,” he replies when asked.

Chin reiterates that Genetec has proven that it is able to design and customise solutions to meet customer needs, and deliver them in a timely manner.  “That is a logistical feat as the machines are designed and built locally, but shipped to their manufacturing facilities, set up and integrated with the rest of the manufacturing chain,” he says.

Although largely known for its EV capabilities, Genetec serves a diverse base of five industries, namely EV and battery, automotive, computer peripherals, consumer goods and healthcare.

“Genetec has many Tier-1 customers that are recognisable. However, we can’t mention any names due to client confidentiality clauses,” Chin says, emphasising the “tremendous growth” in the industries that Genetec serves, given the broad digitalisation theme, population growth, as well as the move towards EVs, green energy and the related ecosystem.

“We are expanding our footprint in Malaysia only. Malaysia will continue to be our base and all investments in building up our capacity will be in Malaysia.”

According to Chin, Genetec’s rise in popularity among the investing fraternity can be attributed to a number of reasons. Firstly, he says, there is a broader trend where Genetec, as a technology stock, is immediately relevant.

“Technology as we know is driven by several global themes — digitalisation, the global shift to renewable energy due to the zero-carbon goal, the impact on the automotive industry in the shift towards EVs, and growing need for healthcare and consumer electronics due to population growth and increase in affluence.”

Meanwhile, technology stocks make up less than a tenth of Bursa Malaysia, and most are either semiconductor or digital services-related firms, he says. “If investors want to capitalise on these growing trends, especially in the EV space, they need to look beyond these,” he observes.

On Genetec’s valuation, he insists that the group is in the business for the long term and it will continue to grow over time. “We are in what you call our growth stage. The analysts have put out their estimations on our valuation with the rationalisations. It is probably best to refer [to their forecasts],” he suggests.

According to CGS-CIMB’s latest report on the company dated May 30, Genetec’s order replenishment is gaining good traction, especially from the e-mobility segment following a new production line system contract win for regenerative braking systems for EV and hybrid vehicles from a Tier-1 automotive customer.

“We gathered from management that the end customer for the regenerative braking systems solution is one of the leading German automotive marques. Overall, Genetec added an impressive RM130.7 million new orders in 4QFY2022, raising the group’s total order book to a new record high of RM270 million at the end-March. This covers 98.4% of our FY2023 revenue forecast of RM274.5 million,” Aw and Mohd Shanaz said in the report.

“Genetec is in a growth phase. This is consistent with the industries we service, and we are mindful to ensure that our growth is sustainable over time. Prudent financial management and discipline have been key to our long-term success,” he maintains.

The stock rally for Genetec may be over for now, but for the management, this is just the beginning of a journey to prove the doubters wrong. However, in the long run, will the valuation of EV-related companies still be as hefty when more auto makers start making more of these eco-friendly vehicles?