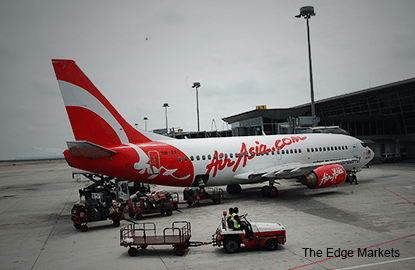 (Dec 2): Budget carrier AirAsia today sought to quash speculation that a wave of pilots calling in sick, which stranded hundreds of furious passengers, was actually a protest over working conditions.

AirAsia has said that around a dozen pilots called in sick this week, throwing domestic and international flights into disarray on Tuesday as passengers complained that the airline's chaotic handling of the logjam forced many to sleep overnight in Malaysian airport terminals.

"It was a freak day with the new system and 11 pilots were not well for night flights," he was quoted by The Star newspaper's website as saying today, referring to the chaos the day before.

The Star report said Fernandes denied that industrial action was to blame, and quoted him calling AirAsia pilots "super professional".

But reports by Malaysian media have stoked unconfirmed speculation that the pilots were expressing displeasure with working hours and conditions. AirAsia pilots are not unionised.

Asked by AFP to comment on the rumours, Fernandes replied in a text message, "Do you honestly expect me to respond to this?"

Some complained on social media that they were told to wait for hours for new flights, only to see those eventually cancelled.

"Hallo!!!.... flight delay for almost 5 hours already!! Do something! People are starving!," one traveller vented Tuesday on Facebook.

The flights affected were mostly domestic, but Malaysian media said an AirAsia flight to Bangkok also was disrupted.

"We have over a thousand pilots, 13 is a small number and everything is back to normal now," the spokesman said.

The episode came as Indonesian investigators released a report on Tuesday into the crash of Indonesia AirAsia flight QZ8501 last December, which killed all 162 people on board.

The report said inadequate maintenance and poor pilot training by the airline were among the reasons for the crash of the Airbus jet into the Java Sea. – AFP