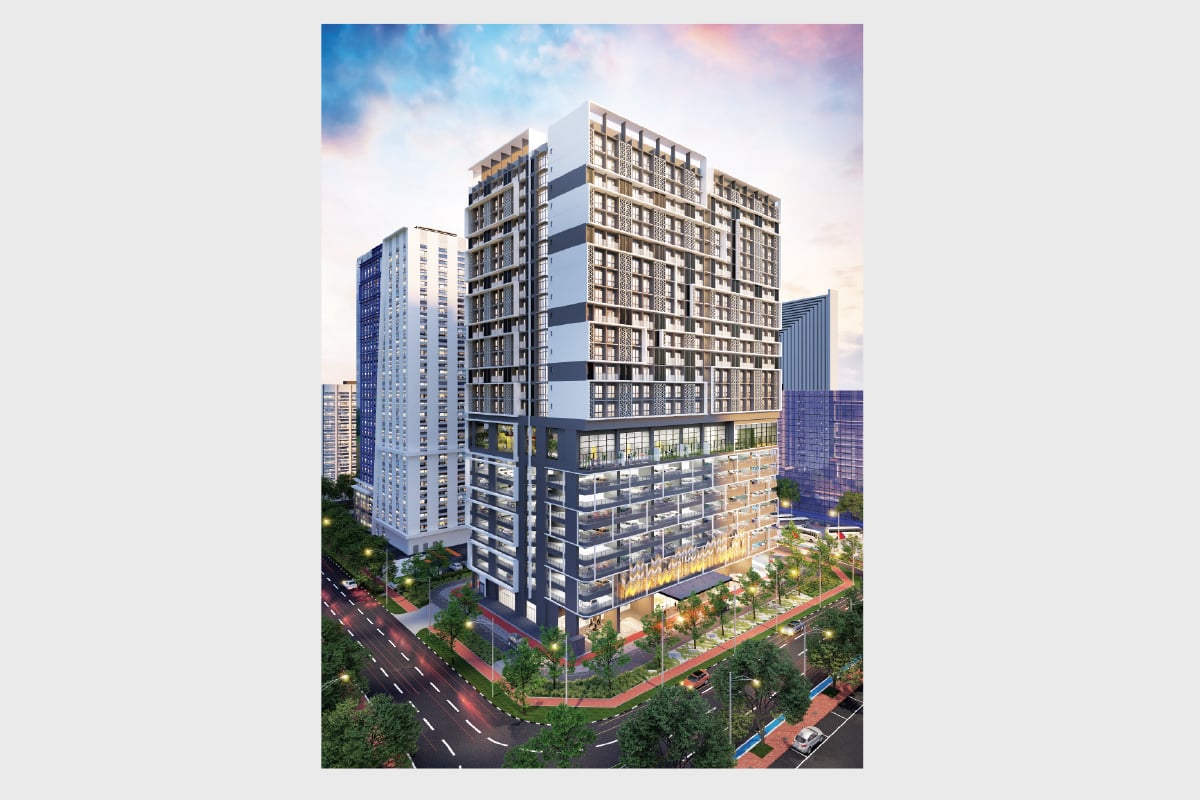 An artist’s impression of Alinea, which will offer 480 SoHo units in a 25-storey block (Photo by EH Group)

The leasehold development will offer 480 SoHo units, with built-ups of 441 sq ft, in a 25-storey block. Of the total, 90 will come under the Rumah Selangorku affordable home scheme,  priced from RM230,000. These will be bare units.

The remaining 390 will be fully furnished, with prices starting at RM327,000. Pua says the units will come with a digital lockset, bed, sofa, dining table, kitchen cabinet and electrical appliances, among others.

“Alinea is a residential project on commercial land, so buyers will come under the protection of the Housing Development Act … The development is targeted at doctors from the surrounding hospitals, investors, first-time homebuyers, government officers, young couples and retirees. It will be the first communal-living SoHo development in the Shah Alam town centre. Alinea means ‘a line across to all’, to show its accessibility to various amenities in its immediate surroundings,” he tells City & Country. Each unit will come with one parking bay, and the facilities will include a children’s playground, infinity pool, treehouse, gymnasium, communal lounge, open-air multipurpose hall and electric vehicle chargers. The development will also have a four-tier security system, with CCTV surveillance and security guard patrol checkpoints.

The remaining units are scheduled to be launched in the second quarter of the year, depending on the actual sales of Phase 1.

Pua attributes the positive response received to Alinea being the first-of-its-kind development in that locality, its low entry price and fully furnished units, coupled with the transport connectivity as well as accessibility to amenities. The project is scheduled for completion in 1Q2024.

“The current potential buyers are similar to our target market — they are a mix of investors, first-time homebuyers and professionals who plan to use it as a second home. The development is in a prime location and we are confident in selling this project,” he says.

“Covid-19 and the subsequent MCO (Movement Control Order) have affected the property market. Buyers are becoming more price sensitive and selective and they are taking a wait-and-see approach due to uncertainties in the economy. We are using digital platforms to sell our products and, moving forward, we will focus on selling online, with virtual show units and 3D models. With vaccinations underway, we foresee that the market will be in a solid recovery stage beginning this quarter.”

Other than the residential units, Pua says there are four 1-storey shops on the lower level of the building that the developer is keeping for recurring income. These shops will have built-ups of 2,500 to 2,900 sq ft and, when they are open for business, they will be accessible to the public.

“The shops will have a different parking entrance from the residential component and we are planning to put in services such as self-service coin laundry. Closer to the vacant possession of the units, we plan to get an external operator to come in to help the owners rent out their units … it is optional for the owners,” he says.

Other than Alinea, EH Group has several ongoing projects, including Ixora and Adenium Indah in the Klang Valley, and E-Residence and SkyMillion in Sabah.