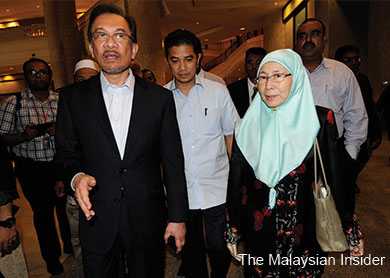 PUTRAJAYA: Datuk Seri Anwar Ibrahim’s lawyers sought to build a case that his former aide Mohd Saiful Bukhari Azlan is not a credible witness, as the hearing of the final appeal by the Opposition Leader against his sodomy conviction began at the Federal Court to day.

Among the points raised to cast doubts on Saiful's credibility was the alleged use of the K-Y Jelly lubricant during penetration, a photograph of Saiful serving tea at Anwar's home a day after the alleged offence, and the semen sample taken from Saiful's underwear.

"(These matters) find no mention in (the trial judge’s) judgment when assessing the veracity of (Saiful’s restimony) at the close of the whole case," argued counsel Datuk Seri Gopal Sri Ram.

Anwar told reporters that Sulaiman was unwell and was using a wheelchair.

Anwar, 67, was charged with performing carnal intercourse on Saiful at an apartment in Bukit Damansara on June 26, 2008.

The High Court acquitted Anwar of the charge in 2012, but the Court of Appeal convicted him last year and sentenced him to five years in jail.

He has obtained a stay of execution of the jail term pending the outcome of his appeal in the Federal Court. The prosecution has also filed a cross-appeal to enhance the jail term which could be extended up to 20 years.

On the point of the alleged use of K-Y Jelly, Sri Ram argued that the claim casts doubts on Saiful's evidence and the entire police investigation.

"If the gel had been used it would have been mentioned in (the list of) exhibits," he submitted, pointing out that it was not.

He added that Investigating Officer Jude Pereira only took the gel from Saiful on June 29, 2008, three days after the alleged sodomy. Saiful testified that he had handed the gel to the IO on June 28 but that it was returned to him.

"The learned trial judge did not address his mind to this part of the case at all despite strenuous cross-examination on the point. There is nothing mentioned in the High Court judgment as to whether the story told by (Saiful) about the existence of the lubricant was credible.

"Instead, his evidence was accepted without any analysis. There was therefore no judicial appreciation of evidence on that point," Sri Ram said in his written submission.

The ex-federal court judge also argued that if the lubricant was used Saiful would not have complained that he suffered pain.

"The finding of the jelly would have been damning corroboration of the witness’ evidence. (However) no detectable stain on carpet. No traces of jelly was found," counsel submitted.

"What could have amounted to corroboration actually supports the defence's case that the offence never took place," he added.

Sri Ram also raised other contradictions in Saiful's evidence, such as the underwear he wore on the day of the alleged sodomy, which was then washed. Yet, Saiful had not washed his anus in order to preserve semen samples as evidence, Sri Ram said.

Saiful had also waited for two days before lodging a police report against Anwar, counsel said.

"Why keep the lubricant and wash his underwear?" he asked, submitting that the act of washing the "most material physical evidence puts paid to the suggestion that he was sodomised".

The written submission went on to add that the chemist found semen stains in another underwear which was not used when the offence occurred.

"Where did the semen come from?" asked Sri Ram.

Turning to the photograph of Saiful serving tea in Anwar's house a day after the alleged offence occurred, Sri Ram argued that both the trail judge and the Court of Appeal had not considered Saiful's demeanour and conduct in the picture.

"His demeanour was normal (and) inconsistent with that person who has been violently sodomised the day before.

"High Court Judge and Court of Appeal did not consider the conduct of the witness," he argued. Mohd Saiful's conduct was inconsistent with his evidence and his police report that he was in fear of his safety.

"(The) camera doesn't tell lies. Why are u looking so … in the photo? Oh, because I was served sour tea. (That is) an admission," he said of a hypothetical conversation.

Justice Arifin  said the  Court has extended the appeal hearing  from two days  because of the volume of submissions by the defence.