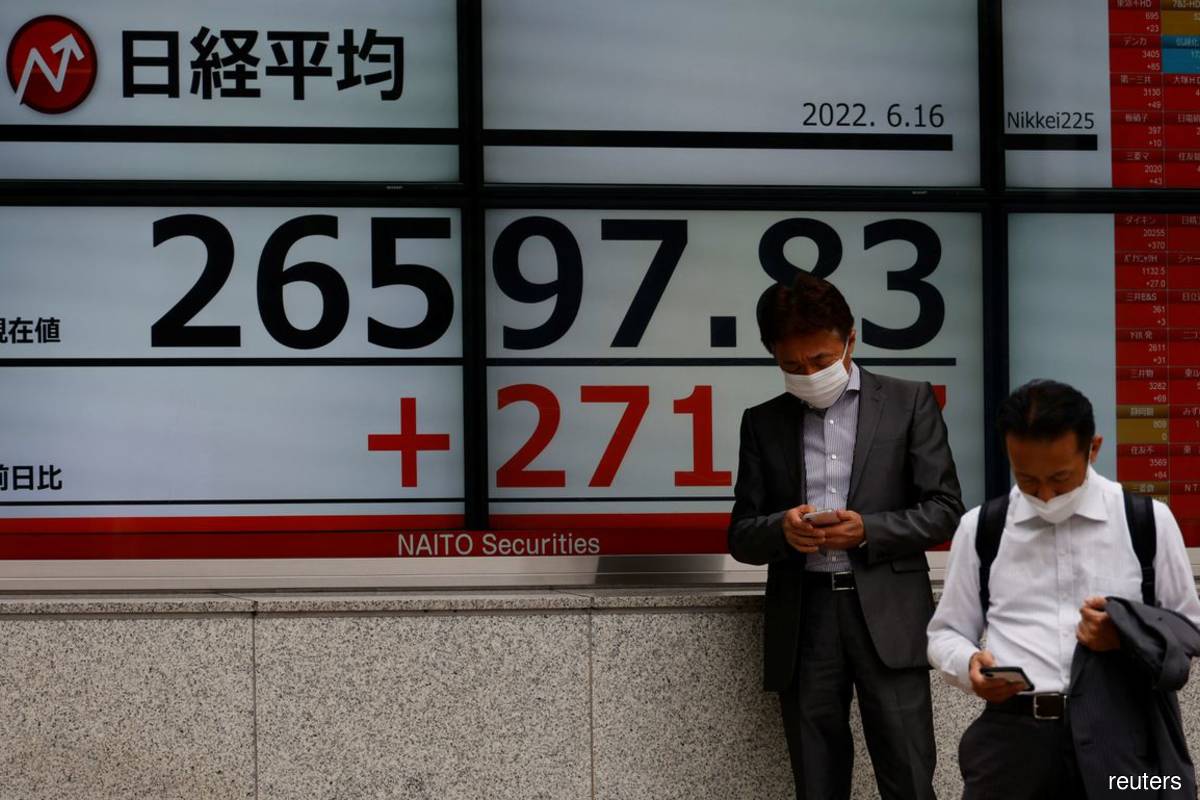 HONG KONG (July 5): Asian shares inched up on Tuesday morning as positive economic data and hints of easing Sino-U.S. tensions offered some respite to the recent sell-offs, though persistent fears about a global recession and sky-high inflation kept most buyers at bay.

MSCI's gauge of Asia Pacific stocks outside Japan was up 0.3%, having erased part of the early morning gains.

The index has fallen 16% so far this year, as worries that central banks around the world will push economies into recession to break red-hot inflation have sent investors running for cover.

Offering brief respite to nervous markets was a report that U.S. president Joe Biden was leaning towards a decision on easing tariffs on goods from China as well as news Chinese vice premier Liu He had spoken to U.S. Treasury Secretary Janet Yellen, said Redmond Wong，market strategist at Saxo Markets Hong Kong.

A survey showing China's services activity at the fastest pace in almost a year also helped sentiment, he said.

Overnight the Wall Street Journal reported Biden was contemplating rolling back some tariffs on Chinese imports in an effort to slow inflation.

Chinese shares, however, were volatile, and gave up their early gains, with blue chips last down 0.6%.

There was also positive data from Japan where the country's services sector activity expanded at the fastest pace in over eight years in June as the easing of coronavirus curbs boosted sentiment among businesses such as those in tourism, helping the Nikkei to rise 0.8%.

Referring to the global growth and inflation dynamics, Saxo Markets' Wong said: "Market participants are still assessing the impact of the tug of war between inflation being at persistently elevated levels and signs pointing to potentially an incoming U.S. recession."

Those concerns were front and centre in South Korea, where June inflation accelerated to the fastest pace since the Asian financial crisis, fanning expectations the central bank could deliver a 50 basis point rake hike for the first time next week to cool prices.

Australia's central bank meets later in the day with analysts expecting another 50-basis-point rate hike to tamp down galloping inflation.

U.S. markets were closed overnight for the Fourth of July holiday, and U.S. share futures rose in Asia trade, with S&P500 e-mini futures up 0.4%.

In currency markets the dollar index was steady at 105.7, still broadly supported by its safe-haven credentials.

U.S. treasury yields returned from the holiday higher, with the yield on benchmark 10 year notes at 2.9686% but failing push back above the symbolic 3% level.

Brent crude futures rose 0.4% to $113.92 a barrel after a 2.4% gain on Monday, as a strike in Norway is expected to disrupt oil and gas output, fanning tight supply worries.