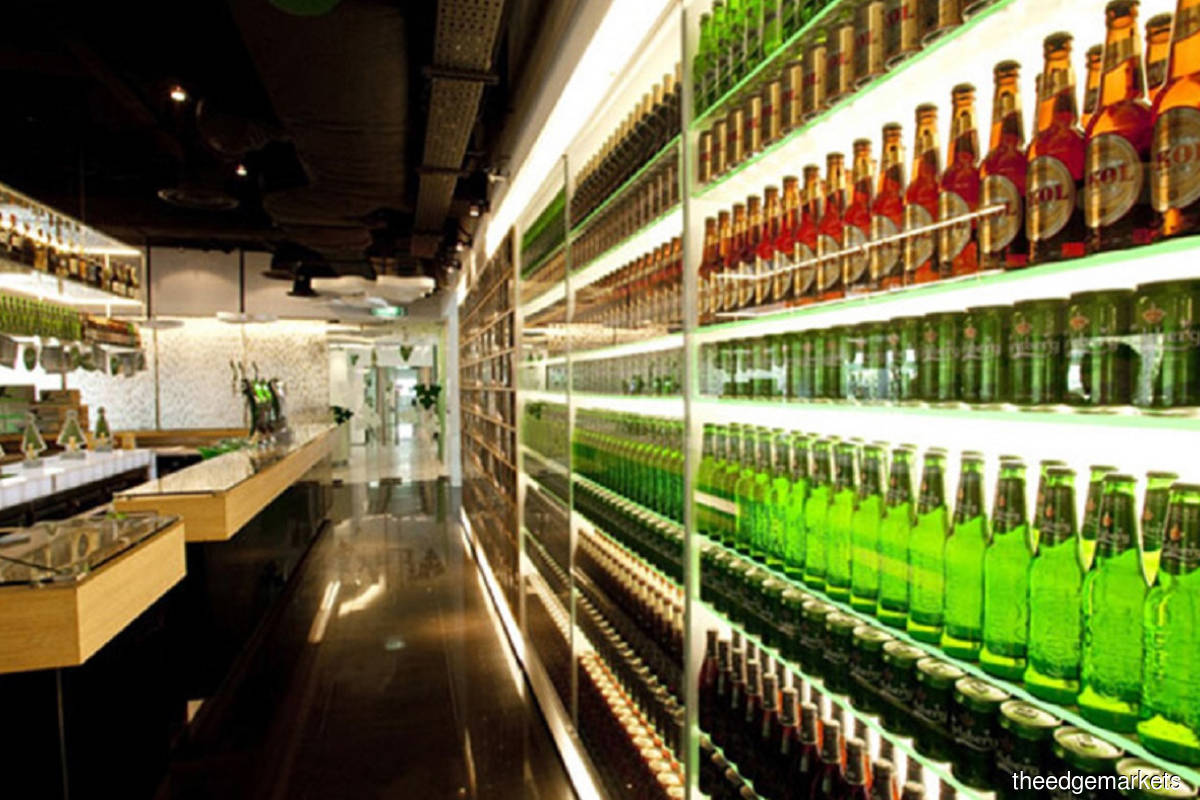 HIGHER selling prices of beer come July 1 may impact demand in the third quarter of the year but breweries’ dividends are expected to remain unscathed as long as they stay profitable.

It has been reported that Carlsberg Brewery Malaysia Bhd will be raising the prices of its products on July 1 because of increasing input costs. It is understood that the brewery will be raising prices of most of its brands including Carlsberg, Smooth Draught, Special Brew, Skol Beer, Danish Royal Stout, Asahi, Kronenbourg 1664  Blanc, Somersby, Connor’s Stout Porter and Nutrimalt. Price revisions for Corona Extra and Jolly Shandy are not expected.

Carlsberg did not respond to a request from The Edge to confirm the price increases.

“Carlsberg has just issued us a formal notification of its price increase. Earlier, we were informally told to be prepared for the price increase in its goods. We have not heard from Heineken Malaysia Bhd if it will raise prices too,” Malaysia Singapore Coffee Shop Proprietors’ General Association secretary Datuk Tan Chnan Yeang tells The Edge.

According to analysts, Carlsberg has confirmed that it will raise the prices of its goods on July 1, but this has yet to be communicated to its sales channels.

“I’m surprised that Carlsberg is raising its prices now instead of in the fourth quarter, to tie sales in with the year-end festive momentum,” says one analyst. Meanwhile, Heineken Malaysia Bhd, when asked whether it will also raise prices, says, “We cannot comment on our plans, which are commercially sensitive. Should there be any price announcements, our distributors and customers will be the first to be informed. Nevertheless, in light of the current challenging environment and global supply chain uncertainties, we continue monitoring our input costs to ensure we remain competitive”.

“Normally, when there is a price increase, Carlsberg and Heineken tend to do it around the same time. I would not be surprised if Heineken follows suit soon after Carlsberg makes its announcement. The question of whether Heineken will raise its prices depends on how it is managing its margins as cost pressures bear down on breweries. Under these circumstances, a price hike is inevitable and a matter of timing,” the analyst remarks.

Whether the price hike will lead to a drop in demand for beer will depend on the quantum of the price increase. However, the analyst does not expect consumers to feel the heat now as “breweries’ target markets are consumers with spending power”, given the relatively inelastic price of beer.

“I expect the price hike to affect demand in the third quarter, which may impact sales. Overall consumer spending is expected to slow down in the third quarter after two to three consecutive quarters of spending over the Chinese New Year and Hari Raya festivities, long weekends and border reopening. It is not just beer; everything else is getting very expensive,” the analyst points out.

“Breweries will remain profitable even with price hikes. The only periods in which the players cut dividend payouts were when they were not allowed to operate (during the lockdowns),” the analyst notes.

According to a Hong Leong Investment Bank (HLIB) Research note on April 6, the cost of barley — one of the main ingredients for beer besides malt and wheat — had increased by 31%, while aluminium had risen 45% year on year. “Raw material and packaging costs account for 8.3% and 3.0% of Carlsberg’s (FY2021) and Heineken’s (FY2020) revenues, as the companies have been actively managing their costs by way of hedging, cost-optimisation efforts and working closely with procurement partners,” says its analyst Sophie Chua Siu Li.

She adds that brewers’ ability to pass on the higher costs to consumers and better operating leverage expected in 2022 should support margin recovery as forced brewery closures are not expected. HLIB has “buy” calls on Carlsberg and Heineken with target prices of RM27.08 and RM24.92 respectively.

According to Chua, both brewers have typically maintained a payout ratio of more than 95%, with the exception of Carlsberg during the pandemic, when its dividend payout declined to 75% in FY2020 and 85% in FY2021, as the group decided to conserve cash in the period of uncertainty.

“Following the expected recovery in alcohol consumption, we forecast that both the brewers will revert to a payout ratio of 100% in FY2022 and beyond, and that should translate to decent dividend yields of 4.1% for Carlsberg and 4.4% for Heineken,” she says.

For the first quarter ended March 31, 2022 (1QFY2022), Carlsberg’s net profit rose 37.82% to RM91.59 million from RM66.46 million a year ago, which the brewery attributed to a successful Chinese New Year (CNY) campaign and the easing of Covid-19 restrictions. Quarterly revenue increased 22.91% to RM653.85 million from RM532 million last year due to improved sales revenue in both its Malaysia and Singapore operation segments. Its board of directors announced a first interim dividend of 22 sen per share, with an ex-date of June 8, payable on June 22.

For perspective, most consumer stocks have experienced a strong recovery amid the gradual economic reopening since the middle of last August. Brewers lagged, given the pandemic restrictions that were less favourable to them, but this is expected to change as operations for bars and pubs resume, operating hours normalise and international borders reopen, Chua explains.

Analysts are of the opinion that the easing of pandemic restrictions as Malaysia and Singapore transition to endemicity will be advantageous to both Carlsberg and Heineken, with the reopening of nightclubs in Singapore (April 19) and Malaysia (May 15) boosting alcohol consumption.

“With the relatively inelastic demand for beer, we are also not too concerned over the rising input costs (increasing barley and aluminium prices), as we believe that the brewers should be able to sufficiently raise prices to protect margins, if need be,” remarks HLIB’s Chua.

In a May 25 note, HLIB raised Carlsberg’s revenue forecast for FY2022 and FY2023 by 2% to 10%, and introduced a FY2024F revenue forecast of RM336.7 million for the company. In an earlier note (May 12), it adjusted Heineken’s FY2022 to FY2023 earnings projections upwards by 8% to 16% after taking into account the beer maker’s higher-than-expected revenue and lower-than-expected operating costs, and forecasted FY2024 earnings of RM369.1 million.