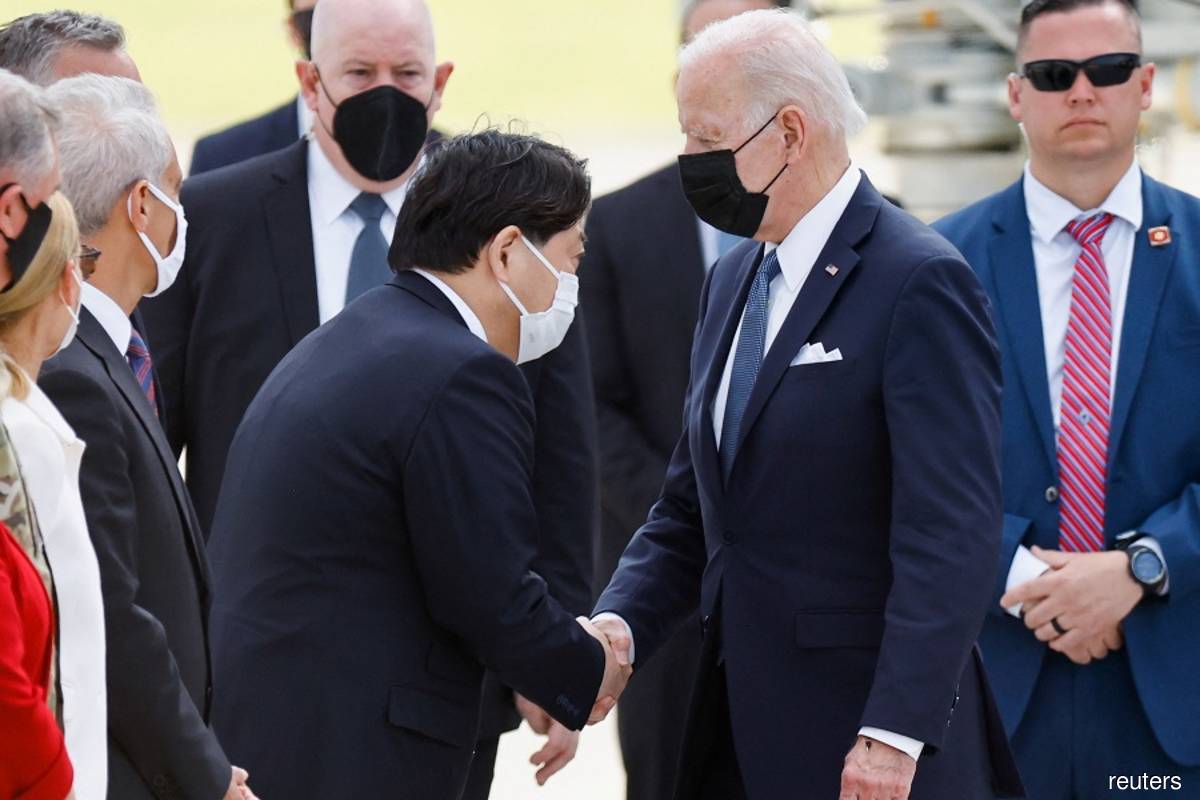 US President Joe Biden shakes hands with Japanese Foreign Minister Yoshimasa Hayashi upon his arrival at Yokota U.S. Air Force Base in Fussa, on the outskirts of Tokyo, Japan on Sunday, May 22, 2022. (Photo by Kim Kyung-Hoon/Reuters)

TOKYO/BEIJING/WASHINGTON (May 22): President Joe Biden arrived in Japan on Sunday to launch a plan for greater US economic engagement with the Indo-Pacific, facing criticism even before the programme is announced that it will offer scant benefit to countries in the region.

On the second leg of his first Asia trip as president, Biden is to meet with leaders of Japan, India and Australia, the "Quad", another cornerstone of his strategy to push back against China's expanding influence.

Biden meet with Japanese business leaders, including the president of Toyota Motor Corp 7203.T, at the ambassador's residence in Tokyo shortly after arriving, said a person familiar with the matter.

On Monday, he is to call on Emperor Naruhito before talks with Prime Minister Fumio Kishida. He and Kishida are expected to discuss Japan's plans to expand its military capabilities and reach in response to China's growing might.

Biden on Monday plans to roll out the Indo-Pacific Economic Framework for Prosperity (IPEF), a programme to bind regional countries more closely through common standards in areas including supply-chain resilience, clean energy, infrastructure and digital trade.

Washington has lacked an economic pillar to its Indo-Pacific engagement since former President Donald Trump quit a multinational trans-Pacific trade agreement, leaving the field open to China to expand its influence.

But the IPEF is unlikely to include binding commitments, and Asian countries and trade experts have given a decidedly lukewarm response to a programme limited by Biden's reluctance to risk American jobs by offering the increased market access the region craves.

The White House had wanted it the IPEF announcement to represent a formal start of negotiations with a core group of like-minded countries, but Japan wanted to ensure broader participation to include as many Southeast Asian countries as possible, trade and diplomatic sources said.

Given this, Monday's ceremony will likely signal an agreement to start discussions on IPEF rather than actual negotiations, the sources said.

Beijing appeared to take a dim view of the planned IPEF.

China welcomes initiatives conducive to strengthening regional cooperation but "opposes attempts to create division and confrontation"", Foreign Minister Wang Yi said in a statement. "The Asia-Pacific should become a high ground for peaceful development, not a geopolitical gladiatorial arena."

Some members of the Association of Southeast Asian Nations (ASEAN) could join the IPEF launch ceremony, an Asian diplomat said, but a Japanese Finance Ministry official said many in the region were reluctant because of the lack of practical incentives like tariff reductions.

"It seems the White House has decided to make the IPEF launch more like a party with an open bar that all are invited to, with the real work to start on Monday morning," said Matthew Goodman, a trade expert at Washington's Center for Strategic and International Studies.

"Eventually the administration is going to have to offer more tangible benefits if it wants to keep countries on board."

US National Security Advisor Jake Sullivan told reporters on Air Force One that Taiwan would not be a part of the IPEF launch but that Washington is looking to deepen its economic relationship with the self-governing island.

On Tuesday in Tokyo, Biden will join the second in-person Quad summit.

The four countries share concerns about China, but the Quad as a group has avoided an overtly anti-China agenda, largely due to Indian sensibilities.

India's strong security ties with Russia and refusal to condemn its invasion of Ukraine will likely prevent any strong joint statement on that issue, analysts said.

At their last summit in March, Quad leaders agreed that what has happened to Ukraine should not be allowed to happen in the Indo-Pacific — a reference to the threat posed to Taiwan by China, though Beijing was not mentioned by name.