Breakingviews: China property bailouts leave most out in the cold HONG KONG (Nov 30): President Xi Jinping is wrapping up his massive property stress test, but it looks like few have passed. On Monday Beijing announced homebuilders can use equity financing again, lifting a ban in place for years as Xi tried to rein in property prices.

It was precisely what the now near-collapsed China Evergrande had asked for back in 2020, before regulators dashed its hopes of listing in the Chinese mainland. The rejection triggered repayments for Evergrande’s strategic investors, setting off a sector-wide crisis exacerbated by Xi’s “three red lines” that eventually choked financing for most developers.

Investors are understandably excited, pushing China's CSI 300 Real Estate Index up 9.4% on Tuesday to its best one-day increase ever. Along with at least $220 billion in new credit lines from state banks that can now access interest-free funds from the central bank, it sends the strongest signal to date that Beijing is committing to a bailout of some form. A persistently worsening market, forecast to shrink another 10-15% in home sales next year per Moody’s, has put even the most financially prudent under duress.

But it’s unlikely that Evergrande, this time around, will be entitled to such benefits. So far, the government has underscored priority for “good quality” firms, and eligibility is subject to approval. State-owned lenders like Bank of China have extended olive branches to only about a dozen developers. Among them is Country Garden, whose US dollar bond that matures in January has rebounded 43% to 96 cents on the dollar this month.

In comparison, an Evergrande bond due in January still trades at 5.5 cents. Defaults and bankruptcies for over a hundred weaker peers are set to continue. China Construction Bank’s offshore unit, for example, has filed a winding-up petition against the US$294 million Zhongliang Holdings in Hong Kong over defaulted payments on an 8.5% US dollar bond, IFR reported last week.

Foreign bondholders will remain low on Beijing’s priority list. The additional funds are primarily for delivering projects that had been pre-sold to home buyers. S&P Global Ratings estimated in September up to 800 billion yuan (US$112 billion) is needed “to ensure distressed developers can finish presold homes”. More projects probably have stalled as the economy cools. These property bailouts are set to leave most in the sector out in the cold. 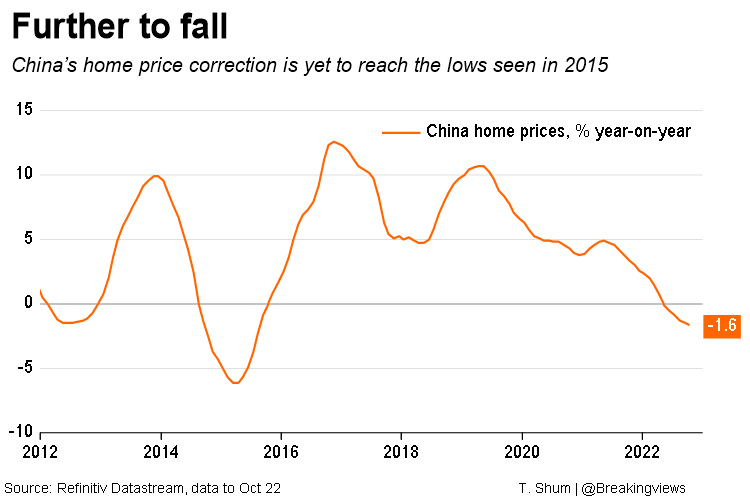