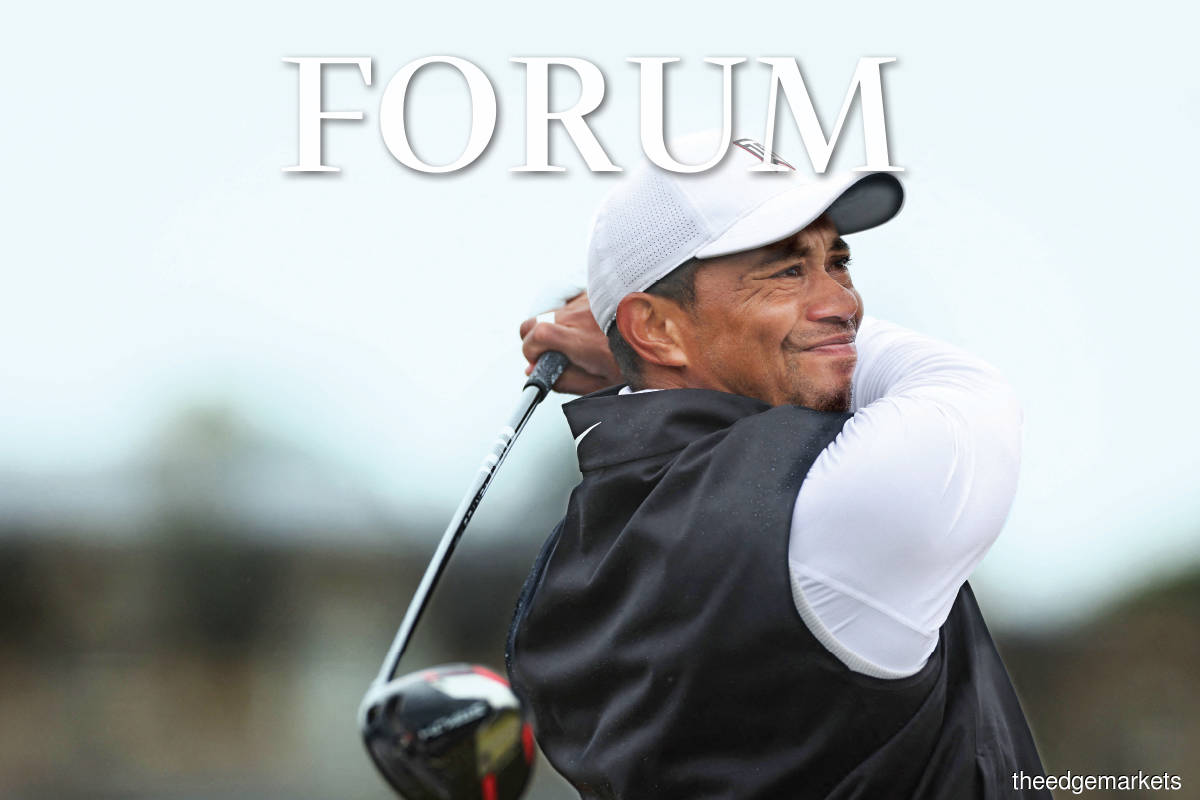 There are many things you could do with a spare US$3 billion (RM14 billion). You could support a few worthy causes, perhaps. Or indulge a football fantasy like buying Liverpool FC. The possibilities are endless. But making an elite group of exceedingly rich golfers even richer wouldn’t be on many people’s wish lists. Especially if your own country’s best player is ranked 2,443 in the world.

But that’s what Saudi Arabia is doing with LIV golf — a sports-washing exercise that is tearing the professional game apart. Having bought Newcastle United for a fraction (£130 million) of LIV’s budget and seen steady progress with a fraction of the angst, teeing off in the royal and ancient game has more than lived up to its tagline: “Golf but louder.”

From clangers dropped in conversation, indecent sums cascading into bank accounts as prize money and pop music blasting from speakers around the course, it has been deafening. So much for “Quiet, please”, yet small galleries have ensured that the buzz has been in the locker room, the media and, coming soon, the courtroom.

But a lull in action, if not in recriminations, while potentially game-changing legal verdicts await early next year, affords a chance to draw breath. Time, then, to look at how something designed to boost a country’s human rights image ended up plunging the most civil of humanity’s games into internecine warfare.

So far, US$794 million has been spent on the LIV series, which purports to rival both the US PGA and DP (formerly European) tours. A clutch of the world’s top golfers, including 12 Major winners and four ex-World No 1s, has been snared. Boosting the numbers are a few old hands and grateful journeymen collecting an unexpected windfall. Saudi No 1 Othman Al Mulla is not among them.

But as the riches poured in, the fairways bristled: distrust was manifold, friendships were broken and even the jewels in the crown, the Majors and the Ryder Cup, are bracing for diluted fields next year. Sensing a hostile takeover, golf’s establishment played hard ball: deserters were banned and denied world ranking points.

The tough stance made players think but did not entirely stem the tide. Many were made offers they couldn’t refuse yet still they agonised. As none other than

Tiger Woods reminded them: “They are turning their backs on what has allowed them to get into this position.”

He added: “What is the incentive to go out there and earn it in the dirt? You’re just getting paid a lot of money up front and playing a few events and playing 54 holes. They are playing blaring music and have all these atmospheres that are different.”

But in ones and twos they switched. Rattled, PGA president Jay Monahan counter-­offered, significantly upping the cash for Tour events and boosting the Player Impact Programme for the very best. Five of the beneficiaries still took the Saudi shilling.

Woods and Rory McIlroy, the two loudest voices against LIV, came up with stadium golf and hi-tech alternatives to entice the young guys to stay. Woods, who has more credibility than any golfer in the world, only enhanced his standing by turning down US$800 million to be the face of the LIV series. Earlier, Jack Nicklaus had also refused.

Apart from missing out on golf’s two immortals, LIV managed to find a few bunkers with its choice of frontmen.

CEO Greg Norman, a former World No 1 and renowned as The Great White Shark, tried and failed to topple the PGA with a proposed World Golf Tour back in the 1990s. He was seen as having an axe to grind.

Its first major catch, Phil Mickel­son, also has a personal grudge against the Tour — and a gambling habit. His now infamous “They can be scary mothers” quote about his new paymasters all but scuttled the whole enterprise.

Norman weighed in with a gem of his own when quizzed about the murder and dismemberment of Washington Post journalist, Jamal Kashoggi. “We all make mistakes”, is how he responded. It sounded no worse than missing a three-footer.

Neither can be trusted in front of a microphone and another divisive presence was that of Donald Trump. The former US president and Norman hit it off well enough for Trump to offer two of his courses for the series. It takes one narcissist to know another, the game concluded. The Washington Post noted: “Golf now has its first explicitly right-wing sports league.”

The Saudis insist LIV is all part of Vision 2030, a strategy to integrate the kingdom with the rest of the world and promote sport within the country. But it seems a strange way of doing it. Perhaps a reflection that Crown Prince Mohammed bin Salman is not a golfer, or a sportsman at all.

Still, when Cameron Smith, 29, joined up soon after winning the British Open, many felt the momentum was with LIV. More players are expected to sign up for a fully-fledged league next season. It was enough for Mickel­son to gloat: “I’m glad I joined the winning side.”

But LIV still has an awful lot of work to do. Top priority is a broadcasting contract with a major network as neither golf fans nor TV moguls have been impressed with the product so far. Its 54-hole format with a shotgun start and no cut has poor viewing figures on YouTube. The final round in New Jersey in July attracted an average of 74,000; the PGA Tour got 2.5 million on the same day.

Its exhibition feel lacks the cutting edge of competition and players have been seen to shrug off missed puts knowing they’ll get their money anyway. Money for old rope. Overall winner Dustin Johnson trousered US$35.6 million for just a handful of rounds while Branden Grace shot 80 at the final event and still took US$1 million from his team.

If anyone summed up the essence of the whole business it was American Pat Perez, 46, who has three wins in 22 years on tour. When asked what he thought about collecting US$8 million from just three matches and finishing no higher than 15th, he said: “I’ve been paid and I don’t give a damn.”

As hard as others try — it has given a US$300 million kiss of life to the Asian Tour — LIV finds it impossible to shrug off the perception that it is a league of avarice, with a lousy format sponsored by a regime the world would shun but for its oil. You also feel they could be playing down the wrong fairway by pushing the team element for an individual sport.

And the names don’t help: Aces, Stingers, Majestycks and PunchGC wouldn’t resonate in a kindergarten let alone get you up at 3am to watch a live stream of the rich getting richer. If LIV gets its wish, the game could end up like boxing with an alphabet soup of “world” governing bodies and multiple “world” titles.

It may be LIV-ing the dream for a select few, but for pro golf it’s a nightmare scenario: an unplayable lie with its future to be decided not on the course but in court. Time to shout “Fore” — if anyone can hear.