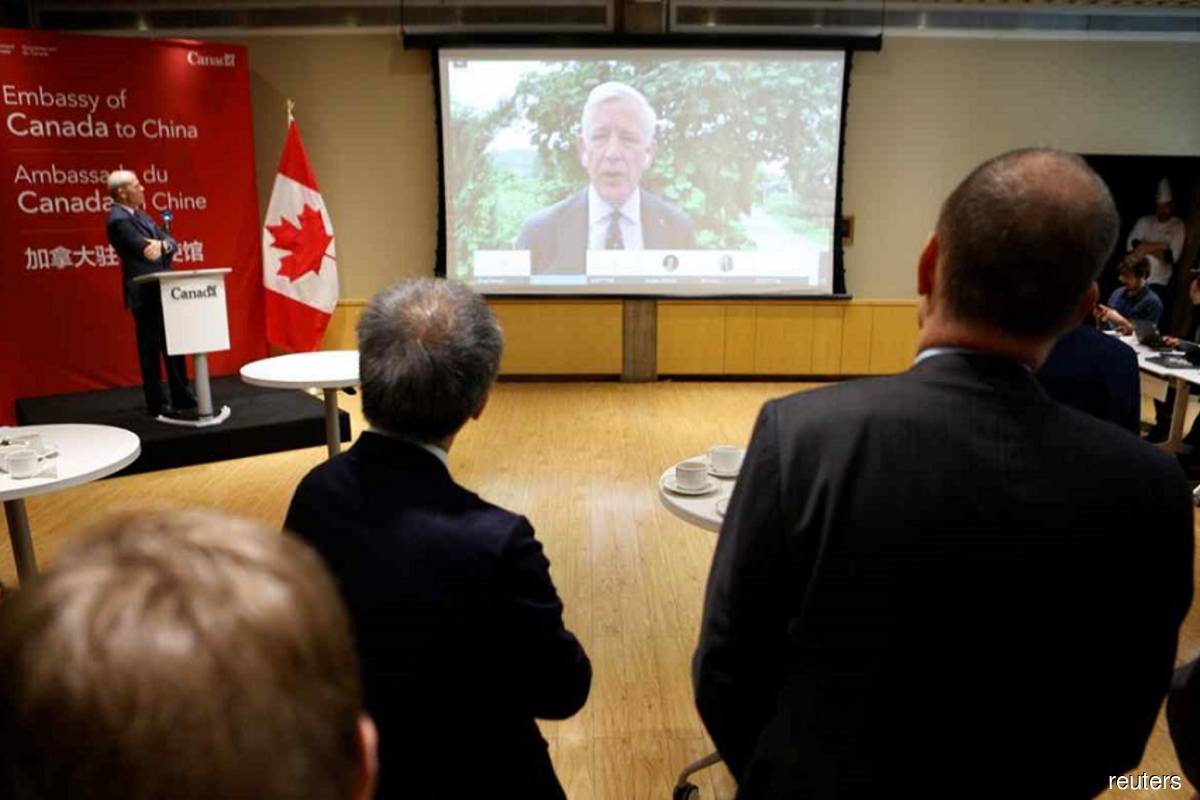 Canadian Ambassador to China, Dominic Barton, speaks to journalists and diplomats via video link from Dandong, where a local court ruled on the case of Michael Spavor, charged with espionage in June 2019, at the Canadian embassy in Beijing on Aug 11, 2021. (Reuters filepix)

OTTAWA/WASHINGTON (Dec 6): Canada's ambassador to China said on Monday that he would soon leave his post, after a two-year assignment where he helped secure the freedom of two Canadian detainees despite icy relations between Beijing and Ottawa.

Dominic Barton's departure, which will take effect on Dec 31, leaves a crucial diplomatic post open at a time when the Liberal government of Prime Minister Justin Trudeau is rethinking its policy towards a more assertive China.

Barton said in a statement that working to free the two men had been "the honor of a lifetime".

Michael Kovrig and Michael Spavor spent almost three years in detention before being freed in September. The two were jailed shortly after Canadian police picked up a top Huawei Technologies Co Inc executive on a US warrant.

Trudeau, under pressure from the official opposition Conservatives to take a tougher line with China over human rights, said Canada was "better positioned to manage this important relationship and achieve our diplomatic objectives".

Conservative leader Erin O'Toole said Trudeau had mishandled the relationship with China, which he said was currently a disaster. Canada should consider a diplomatic boycott of the Winter Olympics, he told reporters, a step US President Joe Biden is set to announce this week.

Despite the release of the two men, bilateral relations remain chilly. A Chinese ban on imports of canola from two major companies imposed in 2019 remains in place and Canada is yet to decide whether to bar Huawei equipment from 5G telecommunications networks.

Two senior diplomatic sources said Canada was putting together a new strategy for the Indo-Pacific region, in part to deal with China. Canadian officials say Ottawa, which has limited diplomatic influence, must work with others.

In February, Canada launched a 58-nation initiative to stop countries from detaining foreign citizens for diplomatic leverage, a practice that Ottawa says China is using.

Charles Burton, a China expert and senior fellow at the Macdonald-Laurier Institute think tank, said one replacement for Barton could be long-time diplomat Julia Bentley, who served in China from 2011-2014 and recently ended an assignment as head of mission in Malaysia.

Another possibility is Sarah Taylor, a fluent Mandarin speaker, who is ambassador to Thailand.

The office of Foreign Minister Melanie Joly did not immediately respond to questions about when a replacement might be named, or whether Canada might consider a diplomatic boycott.