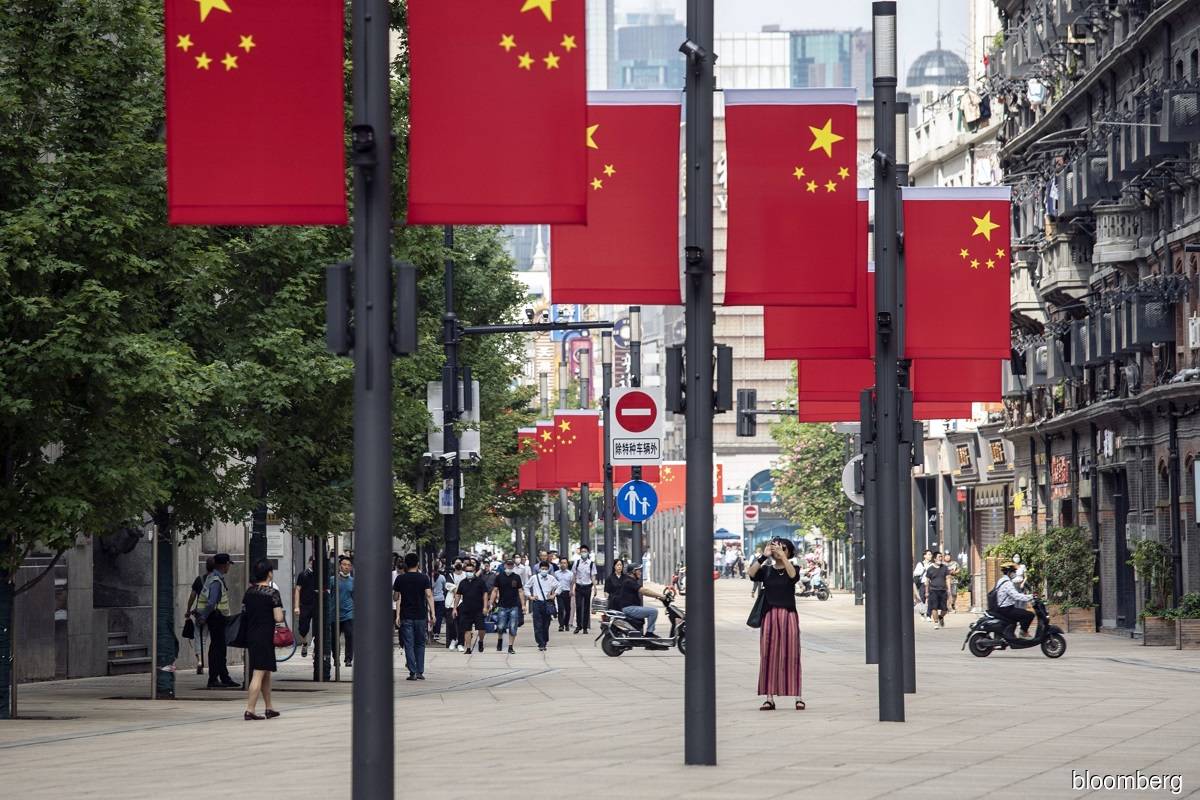 (Sept 27): China's shaky recovery continued in September, with a pickup in car and homes sales in the biggest cities compensating for weaker global demand and falling business confidence. That is the outlook based on Bloomberg's aggregate index of eight early indicators for this month. The overall gauge was at five, unchanged from August, signalling that the economic rebound maintained momentum.

Overall, China's economy picked up in the third quarter from the near contraction in the April-June period, but that rebound was undermined by Covid-19 lockdowns and outbreaks in cities across the country, the continued housing slump, and weakening export demand. A global economy slowing due to the Russia-Ukraine war, rapid interest rate hikes, higher inflation, and currency market volatility will only worsen the downward pressures. Small businesses confidence fell again in September, with both performance and the outlook declining at over 500 companies surveyed by Standard Chartered plc (StanChart). The drop "likely reflecting the impact of the Covid-19 resurgence across the country", according to a report from the bank's economists Hunter Chan and Ding Shuang. Conditions for manufacturers picked up, while service industry companies reported a drop.

Covid-19 and the restrictions to contain it still pose a substantial risk to the economy, with major cities across the country including Chengdu, Lhasa, and Dalian locked down for parts of this month. The restrictions on travel and person-to-person contact imposed have now brought cases back down below 1,000 a day nationwide but also severely damaged service business such as hotels and travel, with tourism revenue slumping 23% during the mid-Autumn festival earlier this month.

A similar result is expected for the holiday week at the start of October, with travel limited and many areas trying to discourage people from returning to their hometowns, especially with the Communist Party congress in Beijing scheduled for mid-month.

Export demand has been a consistent and important driver for China's economy for the past two-and-a-half years of the pandemic, but that support looks to be waning as concern about recession increases. South Korean exports, a leading indicator for global trade, contracted almost 9% in the first 20 days of this month from a year earlier, only the second drop in almost two years and the biggest fall since July 2020.

The cost of shipping goods from China has slumped to the lowest level in more than two years as falling demand finally eases the congestion that had plagued global supply chains. While that will help bring down high inflation in the US and elsewhere by lowering shipping costs, the drop will hurt Chinese companies.

Car sales were one bright spot, with sales in the first two weeks of the month picking up. Auto demand has been boosted by subsidies and tax breaks for electric vehicles and have been an important force in propping up the economy. While cars were a key driver behind August's pickup in both industrial output and retail sales, economists like Lu Ting, chief China economist at Nomura Holdings Inc have warned the policy boost will start to wear off. Another positive sign was that the downturn in property sales in China's four biggest cities may have started to wane. Sales in Beijing, Shanghai, Guangzhou, and Shenzhen saw a slight uptick in the first weeks of September, the first increase in months, according to data compiled by Bloomberg.

This could be an indication that government efforts to to help the housing market are having an effect, although the price falls and frozen construction projects are more of an issue in smaller regional cities than they are in the largest Tier-1 areas. China Construction Bank Corp's plans to set up a US$4.2 billion (RM19.37 billion) fund to buy properties from developers, and banks have been cutting mortgage interest rates and offering special loans to ensure developments are completed.

Activity of small businesses in the real-estate sector improved in September, according to StanChart. However, the needle has only moved from "terrible" to "very bad", according to Pantheon Macroeconomic's Craig Botham. "More money is needed to break the downward spiral trapping the sector, and restore market confidence," he wrote.