Normally, one would avoid getting into hot water, but not Sunway Bhd. It gladly plunged into it. A hot spring discovered on the site of its RM1.5 billion development, Sunway City Ipoh, in Tambun, Perak, inspired its chairman Tan Sri Jeffrey Cheah to build a spa retreat there. Not just any retreat but one built sustainably without damaging the environment. The effort has resulted in The Banjaran Hotsprings Retreat winning this year’s The Edge-PAM Green Excellence Award.

“Our chairman had this vision of building an iconic development in Perak to wow the hospitality and spa sector,” says managing director of property investment Datuk Ngeow Voon Yean on how the retreat came to be.  The Banjaran was developed by Sunway City (Ipoh) Sdn Bhd as subsidiary of Sunway.

Since opening its doors in 2010, the luxury five-star wellness retreat has garnered many accolades, including the prestigious international Fiabci Prix d’Excellence Awards for Best Resort in 2012.

The 16.19-acre retreat is only a 15-minute drive from Ipoh and about two hours from Kuala Lumpur.

Built at a cost of RM73.4 million, The Banjaran features 25 garden and water villas surrounded by 260 million-year-old limestone hills, caves and verdant forest. 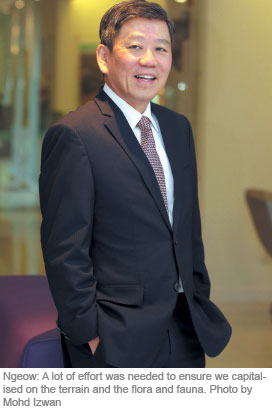 From the start, one of the priorities of the developer was to build the retreat as sustainably and environmentally friendly as possible. “The Banjaran was built with the aim of preserving nature, not destroying it, and most importantly, coexisting with nature,” explains Ngeow.

“It was not easy to build the retreat. Many questioned our ability to balance our ambitious aim for sustainability with profitability, but as we did with Sunway Resort City, we viewed building a sustainable iconic product as a sound corporate strategy rather than something that we had to trade off against profitability.”

First, Sunway gathered a team of experts to ensure that building on the site was done sustainably and that nothing disrupted the flow of the hot spring. “A lot of effort was needed to ensure we capitalised on the terrain and the flora and fauna,” Ngeow says. “Much research was done by our technical business team into designing and building what we have today. The key to this was that we were mindful of achieving a sustainable development. So when we were designing the whole retreat, all the consultants and thermal experts were very careful to ensure the source of the geothermal spring was not blocked.

“After the spring’s source and route had been identified, we adopted mainly raft foundations instead of piled foundations in our construction,” Ngeow says. In places where there was no disruption to the water flow, the normal piling method was used.

“Within the caves, we worked around the stalactites and stalagmites.”

There are four caves that guests can visit. There is the thermal steam cave, the meditation cave, the crystal cave and the wine cellar cave called Jeff’s Cellar.

The thermal steam cave has a platform built over a hot spring so guests can sweat it out. As their names suggest, the meditation cave and crystal cave, which has crystals fitted into it, are for meditative purposes, while one can sip a good glass of wine among the natural rock formations at Jeff’s Cellar.

Indeed, one of the challenges was building inside the caves. “We were challenged from the very start as we wondered how we could collect information on space planning for our designers,” Ngeow recalls. “We learnt that in another cave development in Gopeng (also in Perak), the developer engaged a foreign consultant to carry out 3D surveys — a costly and time-consuming exercise. As a result, we tried to innovatively capture 3D information in 2D form.”

Moreover, due to the nature of the site, Ngeow says much of the work was manual. There just wasn’t enough space for vehicles and machinery to move around freely. As a result, the plan to have The Banjaran completed in 15 months ended up taking 30 months.

While natural surroundings play a big role in the eco-friendly nature of the resort, Sunway also incorporated plenty of green building technology into it.

The Banjaran was constructed using an open and clustered planning concept. As the area is naturally breezy, louvres that promote ventilation and roofs that channel air into the units were included in the architecture of the retreat, reducing the need for air-conditioning.

The water and garden villas were all constructed using recycled materials. Decorative items were created out of deadwood and driftwood. No plastic was used. Even the hand items for guests in the villas are made from ceramic.

Hot-spring water is piped into the units for usage without the need to cool it down because it is a constant 70°C from the source — the heat dissipates along the way.

No filtration system is used for the thermal water as it flows naturally. Thus, its quality is constant. The water gushes out at a rate of three million litres per day or about 2,000 litres per minute from the ground below.

Furthermore, “during The Banjaran’s construction, no trees were harmed. If a tree was in the way, it was relocated,” Ngeow says. “The priority was always to conserve the flora and fauna.”

There are electric buggies for customers to get around, so there are no CO2 emissions. The retreat’s other green practices include growing its own herbs and the use of local food produce.

“We use local products at the retreat and food is no exception,” says Ngeow, adding that they have a Michelin-star chef with over 35 years of experience. Chef Felix Eppisser takes care of the culinary and bespoke events at the retreat while his wife Lucia Franziska is the general manager.

Although The Banjaran accounts for only about 10% of the gross development value of the integrated Sunway City Ipoh, it has elevated the township to international status, says Ngeow, adding that the expected rate of return is about 12% and estimated payback period about 10 years.

He also discloses that Phase 2 of the retreat, which will cover 30.49 acres, will enable more people to enjoy its offerings. However, the expansion is still in the planning stage.

Since it started operating, The Banjaran has come into its own and is promoting a healthy ecosystem. For example, says Ngeow, there has been a proliferation of the majestic Rajah Brooke butterflies in the area.

“I remember during my Boy Scout days, if you saw one or two Rajah Brooke, it made your day,” he says. “But at The Banjaran, we can see them multiplying, which augurs well for the retreat because we are bringing back a part of nature that everyone can enjoy.”

Ngeow admits that it is hard to achieve economies of scale in a boutique development like The Banjaran, but then Sunway’s focus has always been to build structures that give a lasting impression. 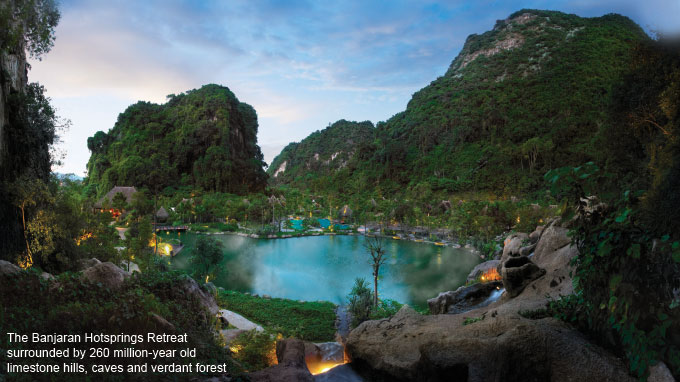