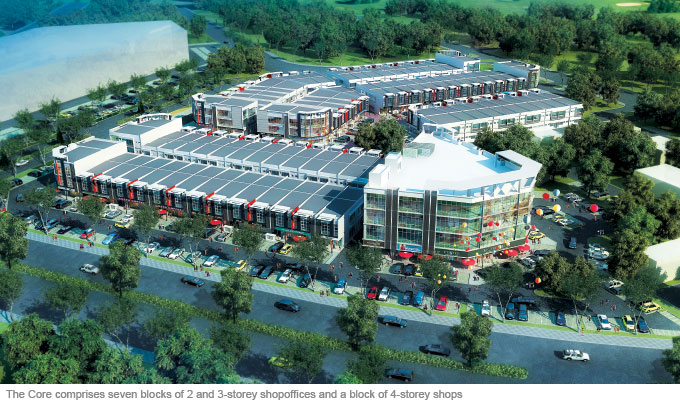 GLOBAL ECONOMIC CRISIS or no, 2009 was a breakthrough year for Sunsuria Sdn Bhd. That’s when it launched The Core in Kota Damansara, a joint venture development with landowner the Selangor State Development Corporation (PKNS).

The development, situated in a high-end industrial park, won The Edge-PEPS Value Creation Excellence Award 2014 in the Non-Residential category.

Kota Damansara was already a mature neighbourhood in 2009, but it needed a commercial development such as The Core, says Sunsuria executive chairman Datuk Ter Leong Yap.

The Core is a self-contained meeting place for both business and leisure, he adds.

“We are delighted and honoured to win this prestigious award,” he says proudly. “This reaffirms Sunsuria’s goal to create value for our customers.”

According to Ter, the business is built on integrity and reliability. “We know that for most people, buying a property is a lifelong commitment using life savings, which places huge responsibility on property developers to offer something of lasting investment value,” he explains.

“We strive to develop projects that contribute to our customers’ success because it adds to our own. We keep this in mind from the initial planning stages and it is part of our core philosophy.”

Ter founded the Sunsuria Group in 1989, when it began developing residential, commercial and industrial projects in the Klang Valley. It now boasts a track record of innovative, high-value projects.

The Core is an acronym for “Contemporary Office Retail Entertainment Centre”. It comprises seven blocks of 2 and 3-storey shopoffices and a block of 4-storey shops. It sits on 10 acres and has a gross development value of RM142.6 million. It was completed in December 2012.

It is linked to numerous residential areas and is in close proximity to many malls such as 1Utama, The Curve, Ikano Power Centre, Giant Hypermarket, AEON Big, Tesco, and Sunway Giza. It is also close to The Strand, Tropicana Medical Centre, Seri Selangor Golf Course, Tropicana Golf & Country Resort and educational institutions such as Sri KDU Smart Schools and SEGi University.

Connectivity is of utmost importance to success, says Ter, because it catalyses the appearance of vibrant and, eventually, mature communities in the area.

Sunsuria could have sold The Core with a higher plot ratio, but instead decided to “optimise” this figure. The current plot ratio, according to Ter, ensures the availability of adequate parking lots, which makes the place more conducive for business.

A high plot ratio would also have led to more unoccupied lots and reduced the commercial sustainability of the development, he says.

The Core has a contemporary faÇade design as reflected in the choice of lively colours by the developer, while its interior allows for future expansion. Feedback from customers showed preference for a larger entrance and a space unobstructed by columns.

“These little things contributed to a higher take-up rate compared with our competitors,” Ter says.

The 244-unit development has had an occupancy of 70% since January 2013. The remaining 30% are not tenanted due to owners being selective about the type of tenants or asking for high rents and some of them keeping the units for their own use.

Apart from The Core’s location, concept and price, the developer attributes its success to its property leasing and management services, which include building management and a concierge. Leasing services are offered to owners with no service fee. The developer’s familiarity with the area allows it to market the property, control rental rates and ensure the right tenant mix.

Ter believes this has led to repeat purchasers who are loyal supporters of Sunsuria projects.

Ter observes that Kota Damansara is almost 90% completed with the exception of some brownfield land. Kota Damansara, also known as Petaling Jaya Utara, can be considered a new area of Petaling Jaya. The commercial areas there do well and are alternatives to places like SS2, he reckons. 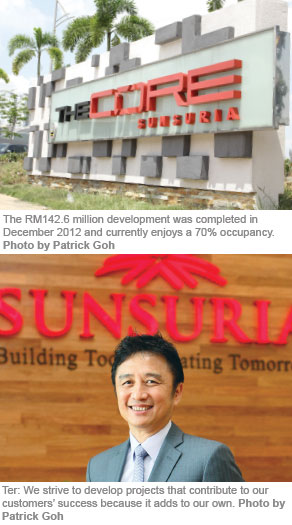 Ter foresees more commercial projects in the area and an appreciation in property values as Kota Damansara continues to mature.  He remains optimistic the area will prosper over time.

Sunsuria has another development in Kota Damansara, namely Sunsuria Avenue, which is a 7.25-acre commercial hub comprising an 8-storey commercial tower, a boutique hotel, and a sports and recreational complex. It is also the location for Sunsuria’s corporate office and main sales gallery.

The company is considering adding a residential component to the development to cater for the growing segment of buyers who prefer to live, work and play at one address.

After Kota Damansara, where next for Sunsuria?

“You will see significant improvements when we roll out our next projects ­— Xiamen University Malaysia Township in Salak Tinggi and The Forum, another people-meeting place that we are going to develop in the growing Setia Alam township,” says Ter.