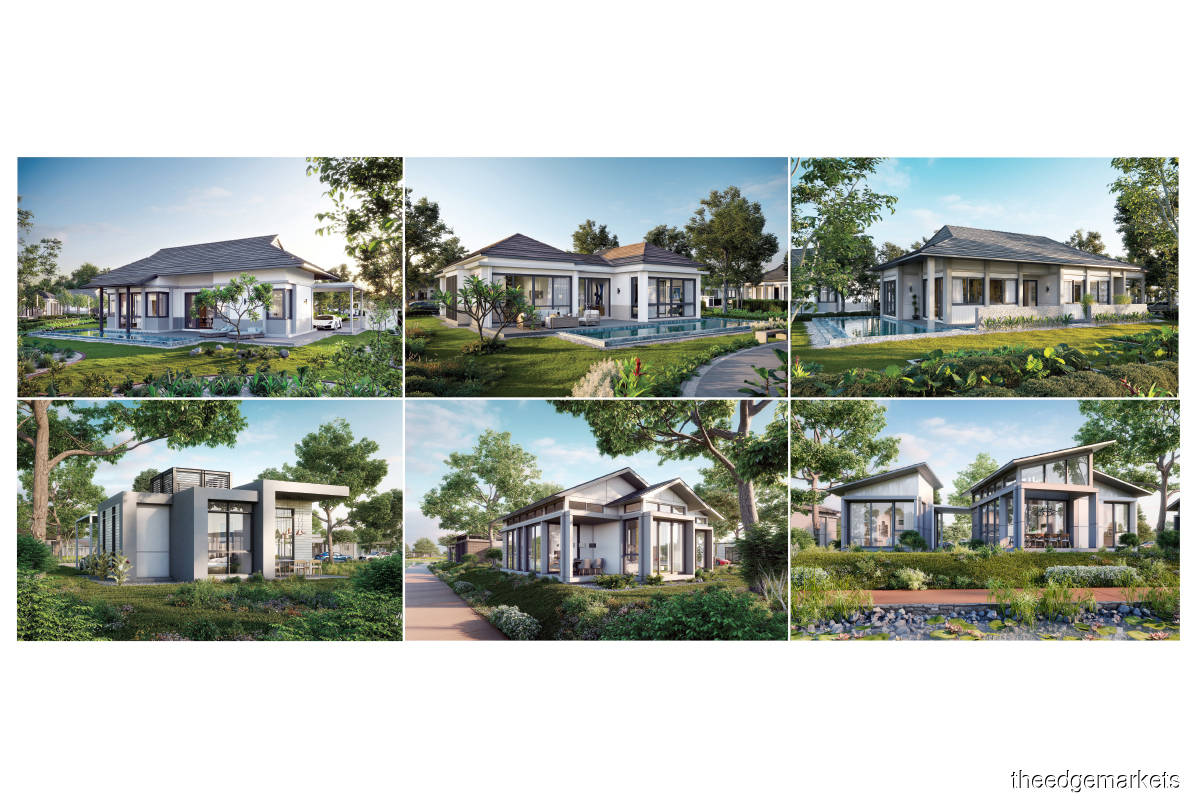 The pandemic has required property deve­lopers to relook at their projects and tweak their designs to cater for possible future lockdowns and provide what many of us take for granted — space.

HIL Industries Bhd is no different. It is developing, in a joint venture with Amverton Bhd, an eco-village with a retirement concept called Carey Circles in Amverton Cove on Carey Island, Selangor. Initially planned as a retirement village, the project has been tweaked so that it is now open to both younger buyers and foreigners, president and CEO Datuk Milton Ng tells City & Country.

Carey Circles, which will be unveiled in the second half of the year, is the first product on Amverton’s 1,938-acre tract on Carey Island. So far, Amverton — previously known as A&M Realty — has built a golf course and resort, a condotel and a water theme park called Riverine Splash Water Theme Park. Ng’s family members are the main shareholders of Amverton and HIL Industries.

He explains that the company took a while to launch Carey Circles as it wanted to prepare Amverton Cove to receive people before it started building homes. “We like to build first so that when people come to see our place, they have confidence. So, we put in the infrastructure first. We have spent over RM100 million on the infrastructure; we built the hotel, the golf course, the water park.

“We try to create value first before starting any development project. And with buyers being more discerning today, their needs are different. You can’t just have houses popping up. You need the amenities, the facilities in the area for people, a proper environment,” he says.

“What we are trying to do here post-Covid-19 are products that are mostly landed. During the lockdowns, we were stuck in the house or condo, you couldn’t even go out. You were like a prisoner,” he says, adding that the expansive spaces at Carey Circles will enable residents to move about freely and have a more comfortable lifestyle. “This is our flagship development here. After this, we want to replicate it for the M40 and B40, but first we must change the mindset [of people],” says Ng, referring to senior living accommodations where residents are not well taken care of.

Carey Circles, a high-end development with a gross development value (GDV) of RM183.3 million, will feature 141 one-storey stratified detached units in two phases. Phase 1 will comprise 56 units, of which three have been built and used as show units. The remaining units will be developed later in Phase 2. The gated and guarded project is targeted for completion in 2024.

Sitting on 45.6 acres of leasehold land, the units have built-ups of 1,300 to 3,500 sq ft and land sizes of 6,800 to 12,000 sq ft. There are six designs — three small modular units and three large ones with a private pool. Prices range from RM1.3 million to RM2.5 million and the maintenance fee, inclusive of sinking fund, is estimated at 25 sen psf.

The target market are owner-occupiers and young families. The ideal buyer, according to Ng, is “someone who is 50-plus and semi-retired; likes golf, gardening and nature; doesn’t have to go to the office daily and can work from home”.

He points out that the smaller units have advantages over the larger ones. “Our smaller units are modular. If your land is big enough, you can add a new section.”

The smaller homes are named after renowned artists — Renoir, Monet and Cézanne — and the larger ones are named after resort destinations — Ko Samui, Bali and Borneo. “The bigger units are called Resort Style Villas and have three bedrooms, a private pool and a gazebo,” says Ng. Clockwise from above: An artist’s impression of Carey Circles; Riverine Splash Water Theme Park; and the 18-hole golf course (Photo by Hil Industries)

He adds that while buyers can buy a bare unit and furnish it to their liking, they can also choose from interior design packages that cost RM70,000 to RM300,000. Moreover, each unit will come with a golf buggy to help reduce the use of cars in the area. Assistance will be rendered to owners who wish to lease their units to visitors from abroad, Ng highlights.

Facilities in Carey Circles include a 6,000 sq ft residents-only clubhouse that will feature an infinity pool, a gym, library, cineplex and games room. There will also be a four-acre lake around which residents can jog or walk, as well as pocket gardens. “Some of the pocket gardens are based on themes. Some will be herb gardens, some will only have fruit trees. One area has a playground and we have a barbeque area as well,” says Ng.

Services, some of which are pay-as-you-use, will include 24-hour concierge, a private butler to help stock up the fridge while residents are away, housekeeping and cleaning, and laundry.

There will also be a nurse on duty, caregiver services, wellness programmes to help keep senior residents active and promote social interaction, and healthcare services to assist residents to keep their appointments with the doctor, chiropractor, dentist and optometrist. In an emergency, senior residents can use a panic device to call for help.

Additional amenities will be available in an adjacent commercial section. “This commercial section will cover 12 acres. The first six-acre phase will include a grocer, ambulatory care centre, sales gallery, restaurants and an open area for tourism activities, where we will bring in food trucks,” says Ng, adding that the Mah Meri, the indigenous people living on Carey Island, will also be invited to participate in activities to increase awareness of their culture as well as the area.

The developer plans to include an international school, a hospital and an assisted care facility. It will build a jetty and run river cruises from it. From top: The bedroom and living area in the Monet show unit (Photo by Hil Industries)

In addition to Carey Circles, HIL Industries has three other joint venture (JV) residential projects. The total estimated GDV of the four projects is RM471.1 million. The company expects to generate a gross development profit before tax of about RM96.1 million, after deducting the estimated GDV and landowners’ entitlements.

One of the JV projects is also on Carey Island. The 35.06-acre development is adjacent to Carey Circles and scheduled to be launched in 3Q2022. It will feature 428 townhouses with selling prices from RM300,000, Ng says. It has an estimated GDV of RM150.2 million.

The company is also involved in plastic injection moulding, producing original equipment manu­facturer parts for automotive, electronics and telecommunications and IT-related products. In 2020, it started manufacturing personal protective equipment such as face masks.