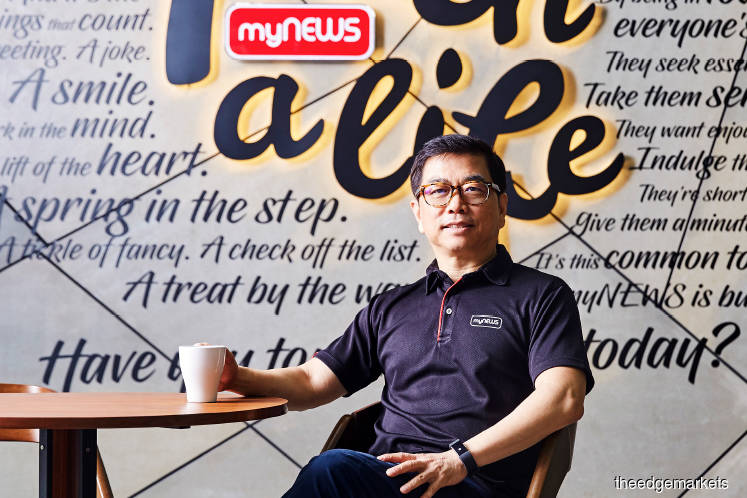 How did MyNews Holdings founder and CEO Dang Tai Luk transform his business from a single magazine and titbit store to a public-listed convenience retail chain — Malaysia’s biggest — in just two decades? Fresh from being feted as the EY Entrepreneur Of The Year 2019 Malaysia, the 59-year-old tells Anandhi Gopinath about his entrepreneurial journey with MyNews, his contribution to print media and his approach to change and reinvention.

It comes as a pleasant surprise to have MyNews Holdings founder and CEO Dang Tai Luk greet me personally at the convenience retail chain’s sprawling headquarters in Kota Damansara, Petaling Jaya. This is followed by a personally-led tour of the modern, sun-drenched MyNews office and, later, of the two new food manufacturing plants that are also located on-site. And no, that is not a misprint — while we were not looking, MyNews quietly transformed itself from a newsagent to a convenience store that makes and sells ready-to-eat food, much like Japan’s cult-status konbinis.

MyNews was recently put under the spotlight when the personable Dang was announced as the EY Entrepreneur Of The Year 2019 Malaysia, having been selected from an exclusive coterie of 17 finalists.

A huge bouquet of flowers stands in MyNews’ cemented lobby and congratulatory messages have continued to flood the office two weeks after Dang received his award at a glittering black-tie affair on Nov 25 at The Majestic Hotel Kuala Lumpur.

“It has gathered so much attention! I wasn’t aware this event actually receives the kind of interest that it does. It’s been wonderful. I really couldn’t believe that I had won. I still cannot,” Dang laughs, good-naturedly. “I was up against some really incredible entrepreneurs, so I really did not think I had a chance to win.”

And yet, many people considered Dang a definite winner from the time the finalists were announced — his is a compelling tale of hard work and reinvention.

Dang looks much younger than his 59 years, even though he says entrepreneurship has been an arduous journey for him and his family. There have been a lot of sacrifices as well as long days and sleepless nights, but it is a job he takes pride in doing day after day. A former IT professional, Dang had always harboured an entrepreneurial spirit and took the plunge when a small space became available at a shopping centre near his home in Bandar Utama. Withdrawing funds from an overdraft account, he and his wife started MagBit in December 1996 — almost exactly 23 years ago. Today, MyNews — which went public in 2016 — has 430 outlets.

For the full story, pick up a copy of The Edge Malaysia (December 16, 2019) at your nearest news stands or visit optionstheedge.com.