ON OCT 25, the Chew family of Lysaght Group and some of its close friends gathered at The Ritz-Carlton, Kuala Lumpur for the launch of the autobiography of the group’s founder Chew Kar Heing, who had died on Feb 6 at the age of 81.

The launch, which was a tribute to the patriarch’s life and his contributions, was hosted by his eldest daughter Annie Chew Meu Jong, who was joined by family members and friends from as far as Australia, England, India and Scotland.

There was also no sign of Liew’s name or face in the coffee-table book, titled Made of Steel: Chew Kar Heing and Lysaght Malaysia, which was given to the guests.

Liew, who is the managing director of Bursa Malaysia-listed Lysaght Galvanized Steel Bhd (LGS), is reportedly not on talking terms with Meu Jong, who had long resided in Australia and was not involved in the running of the company until very recently.

Friction between Liew and Meu Jong began to show just a few months after Kar Heing’s death. It supposedly began with Meu Jong’s objection to LGS’ proposal in May for a share split, bonus issue and free warrants that resulted in the plan being aborted last month.

Some of LGS’ shareholders probably became casualties of the flip-flopping on the exercise. Immediately after news of the proposal, LGS shot up from RM3.24 on May 15 to a historical high of RM6.09 on June 25. However, it had fallen back to around RM3.10 by Oct 20 after the plan fell through. At RM6.09, LGS’ market capitalisation was RM253.2 million.

In an exclusive interview with The Edge at the book launch, Meu Jong, who is the managing director of the family’s private vehicles Lysaght (M) Sdn Bhd (LMSB) and Lysaght Corrugated Pipe Sdn Bhd (LCP), admits that she has had some “disagreement” with Liew.

However, she refuses to call the recent incidents at LGS, such as her opposition to the proposed exercise, a “family tussle”. “You can interpret it anyway you like, but a tussle? No, I don’t see it as a tussle. Family disagreement? [Yes], a little bit,” she says.

When asked to elaborate on the “family disagreement”, she says, “Like him [Liew] not liking me for reasons only known to himself, but I really don’t know. I have been helping my dad in and out, but I’m not stationed here (in Malaysia).”

Meu Jong had left Malaysia at the age of 17 and spent years overseas. She studied and worked in England before migrating to Australia in 1986. She only came back to Malaysia once in a while for holiday.

“It was only in the last few years that I actually started to work with my dad as his daughter, his confidante and his good partner. I would say that in the last four to five years, I grew very close to my dad,” she says.

“He passed away suddenly, he was sick. My relationship with him was very good. I am my father’s daughter, I will honour his legacy.”

The Edge also spoke to Liew for his side of the story but he preferred the conversation to not be published.

While Meu Jong was not involved in the family business for many years, Liew — an accountant by training — had joined LGS’ board in 2003 and was promoted to managing director in 2004 following Kar Heing’s retirement.

Under Liew’s stewardship, LGS’ net profit increased from RM6.1 million in 2004 to RM15.1 million in 2013. Shareholders’ funds leapt from RM53 million to

RM114.2 million and cash reserves from RM2.4 million to RM39.3 million over the same period. The group has zero borrowings.

When asked why she was against the proposed exercise at LGS, which would have enhanced the liquidity of its shares, hence benefiting all shareholders, Meu Jong says Chew Bros (M) Sdn Bhd, which owns the single largest stake of 40% in LMSB, had decided that the proposed exercise by LGS was “not good” for LMSB.

“LGS proposed it (the corporate exercise), but we (LMSB) didn’t know about it until it was announced. When you propose an exercise like that, you should talk to your major shareholders before you announce it. But no, they (LGS) did not [inform us],” she adds.

“The shareholders of LMSB were not happy when they read it (LGS’ announcement to Bursa). I can’t speak for other shareholders, but Chew Bros thinks this is not good for LMSB.”

Meu Jong is also the managing director of Chew Bros.

According to her, an extraordinary general meeting (EGM) was called at LMSB level and its shareholders voted against the proposed corporate exercise at LGS.

“I think it’s a bit hard to talk about it now. We are not just against the bonus issue. There are four items all together — a bonus issue, share split, issuance of free warrants and a change of the memorandum of association,” she explains.

She stresses that it was a collective decision by LMSB, not by any single shareholder, but everyone who turned up at the meeting.

Chew Bros holds the lion’s share of 40% in LMSB while Liew has a 17.1% stake held through WTWT Sdn Bhd and Singapore-listed United Engineers Ltd (UEL), an 11.63% stake.

According to Meu Jong, UEL’s representative attended the EGM and Abdul Rashid sent a proxy but Liew’s WTWT did not turn up.

“You can’t force everybody to turn up. And yes, we notified all the shareholders, explaining to them why an EGM at LMSB level was called,” she says, adding that 83% of LMSB’s shareholders who attended the EGM voted against the LGS corporate exercise.

Although she declines to explain why the exercise is bad for LMSB and Chew Bros, Meu Jong highlights the fact that LGS’ board is obligated to inform the major shareholder before proposing an exercise.

“You’re only a subsidiary. Do you want to make an announcement [without informing us]? If you do, you [had better] make sure you don’t get embarrassed.”

theedgemarkets.com first reported the puzzling objection to LGS’ proposed exercise on Oct 14. Subsequently, with opposition from the major shareholder, LGS aborted the exercise. This dampened the stock’s performance but investor interest picked up again in view of a potential family tussle.

UEL could be the kingmaker

The previous week, The Edge reported that UEL’s 11.63% stake in LMSB could be the key to settle the dispute. Common sense dictates that it would be unfavourable to Liew if Meu Jong or Chew Bros got hold of the stake.

If that happens, Meu Jong would control 51.63% of LMSB, up from the 40% now. By then, even if Liew acquired the stake or had the support of all the other shareholders of LMSB, he would not have enough votes to get past his sister-in-law.

Meu Jong tells The Edge that UEL’s stake is up for sale but refuses to say whether Chew Bros is eyeing it. UEL has no connection to UEM Group here.

“Yes, they have put it up for sale, but we have to go according to our Memorandum and Articles of Association. We will have to work within the confines of the M&A,” she says.

Asked whether Chew Bros is interested in increasing its stake in LMSB, Meu Jong replies, “Maybe, maybe not. There is no commitment. Nothing much is happening, we have to wait and see.”

She also does not respond to speculation that she might need to launch a general offer for LGS should Chew Bros’ shareholding in LMSB exceeds the 50% threshold.

“I don’t know, I really don’t know. All these things are down to my advisers telling me what to do. My dad died in February, everything is still very new to me,” she says.

Meu Jong’s discord with Liew not only stems from LGS’ proposed corporate exercise but also the latter’s disregard for her request to join the board of the listed company.

According to her, she made five attempts to join the board of LGS from April to July this year, but her written requests were ignored. Apart from Liew, another family member who was on LGS’ five-member board then was Kar Heing’s wife, Lim Iee Kuan, 77, who was, however, removed at the company’s AGM in June.

In her sixth attempt on Sept 10, Meu Jong was nominated by LMSB with the support of its director Lim Fong Boon, as well as Lum Tak @ Lim Meng Teck, for a seat on LGS’ board. Twenty days later, at the EGM, she was successfully appointed to the board as a non-executive director.  Liew was against the resolution but was outvoted.

Asked why Liew did not want her on LGS’ board, Meu Jong says, “Only he knows why. He is the only executive on LGS’ board. I don’t want to find out why or ask him either because it might become too personal.”

There was speculation that following Kar Heing’s demise, Meu Jong would return to Malaysia and take over the family business, including LGS. She is now the managing director of the family’s private vehicles Chew Bros, LMSB and LCP but has no executive power at LGS.

But Meu Jong insists that she has no intention of taking over LGS. “No, no, no, I have no such plan. I want to work with him (Liew). There is no point in taking everything. You have got to recognise that these are good people and you’ve got to work with them. That’s what makes you a boss. If you take control of everything, with one person, how much can you do? You can’t.”

Describing her relationship with Liew as “fine”, Meu Jong says, “We are okay, I still call him brother-in-law but we don’t meet very often.”

According to her, she has yet to tell Liew that she is willing to work with him. “I will tell him face to face rather than Chinese whispers.”

The oldest of the Chew family, Meu Jong has two younger sisters and a brother. After her is Mee Lee, who is also a substantial shareholder of LGS, followed by Peter Chew Hew Chek, who is busy with his own businesses, and Audrey Chew Mooi Sing, who is a medical secretary.

Moving forward, Meu Jong says her plan is to get all the companies in Lysaght Group to work together, just like they did under her late father.

Over the years, the Chew family has been running its businesses through LCP and LGS. LCP, which manufactures corrugated steel pipes and highway guardrails, is 100%-owned by LMSB and under the control of Meu Jong.

LGS manufactures traffic poles and masts. After his retirement in 2004, Kar Heing handed over the reins of the company to Liew.

“My dad always said that everybody should work together. You (LGS) might be doing poles, I’m doing guardrails and gantries, but we are all in the steel business,” remarks Meu Jong.

“LGS and LCP are two separate companies with LMSB as a common shareholder. So, we have to sit down together and synergise the business. I will try as much as I can. As I said, my father’s shoes are very big. I have the DNA to continue his legacy, so I will do what I can.” 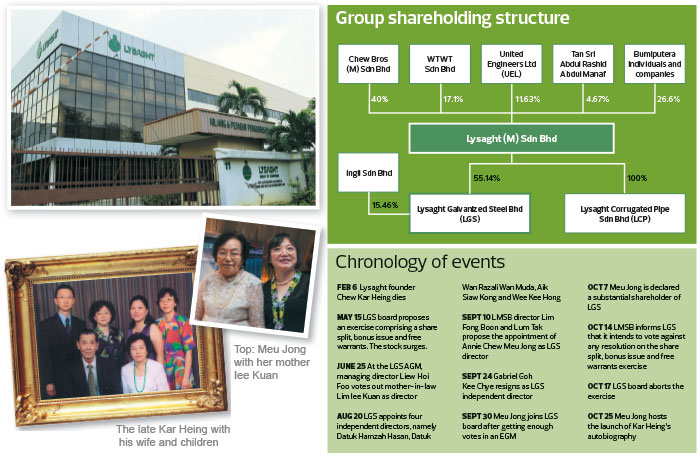 This article first appeared in The Edge Malaysia Weekly, on November 3 - 9, 2014.