Cover Story / Run-Up To GE15: It may be neck and neck for PAS and PH in Kedah, not so for BN 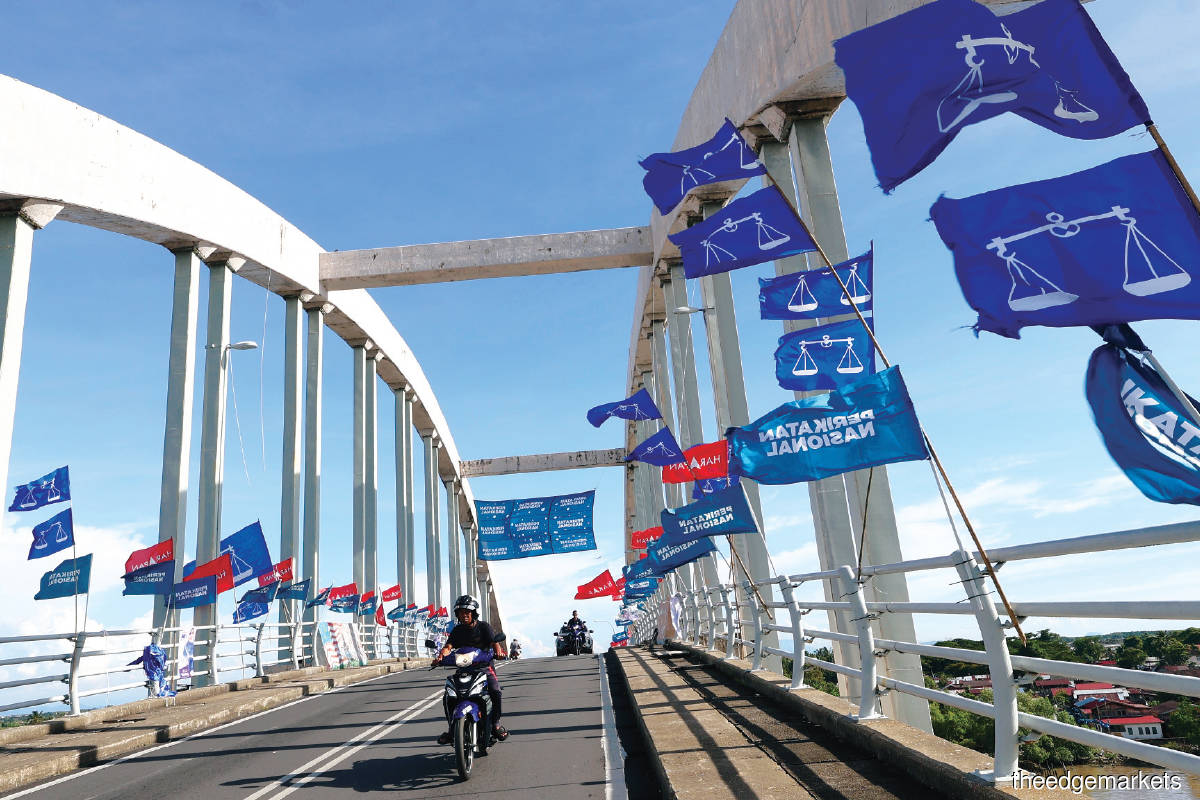 Though Kedah is facing a parliamentary election, candidates are being judged on how they would resolve local issues. (Photo by Bernama)

AS polling day for the 15th general election draws near, the usually tranquil villages in Kedah have come alive with cluster talks, walkabouts and home visits by politicians promising to change things and meet the people’s needs.

While the ceramah have gained momentum, with candidates and political leaders playing to the audience, Kedah voters may already have made up their minds as to which party would best serve their interests.

“In Kedah, as the ruling state government, Perikatan Nasional (PN), or rather PAS, has a competitive edge over the others,” says political science professor Dr Ahmad Fauzi Abdul Hamid of Universiti Sains Malaysia (USM).

He points out that Malays, who form nearly 80% of the state’s population (according to the Northern Corridor Implementation Authority in 2018), still demonstrate a “very much conservative outlook that jives with PAS rather than Pakatan Harapan (PH)”.

The race to form the Kedah government in 2018 was very close, says Ahmad Fauzi, adding that there was almost a tie in the state assembly.

As for BN-Umno, he says its association with corruption, which is “now proven in court”, has repelled a lot of past supporters.

“Having ruled the state from 2008 to 2013 and again from 2020 onwards, for PAS, Kedah has always been its frontline state on the west coast of Peninsular Malaysia,” he tells The Edge.

Though Kedah is facing a parliamentary election, candidates are being judged on how they would resolve local issues. Plus, the emergence of 106,007 new voters aged between 18 and 20, as well as 357,971 youths aged 21 to 29, and how they might vote add a crucial element to the choice of issues.

Hence, one of PH’s war cries in Kedah is its claim that neither PN nor BN had done anything to improve the state’s economy, which would have benefited the people. Even more so for the younger group, which make up nearly a third of the voting registry in the state.

Unemployment stands at 3%, with a labour force participation rate at 66.3% in the third quarter of 2022 compared with the national average of 69.4%.

Kedah’s gross domestic product in 2018 was mostly driven by the service sector (56%), which is made up of wholesale and retail, food and beverage and government services. Manufacturing and agriculture were next at 29% and 12% respectively, according to the Northern Corridor Implementation Authority.

According to Datuk Mahfuz Omar, the Parti Amanah Negara (Amanah) candidate for Pokok Sena, youngsters are being deprived of quality jobs and the opportunity to develop their skills despite the presence of industrial zones in the state. He says there are two or three vocational training centres, but they are running under capacity or are located far from industrial areas, such as the Kulim Hi-Tech Park, so they do not immediately serve the factories.

Mahfuz, who is state PH chief, was deputy human resources minister from 2018 to 2020. He hopes to fulfil his promise of setting up training centres if the coalition is able to form the government again.

Mahfuz is confident of winning “many seats” in Kedah and securing fence-sitters for a few reasons, including winning over voters put off by the alleged use of uncouth language and violence by PAS leaders and supporters with regards to DAP.

“People are also starting to see that investors pulled out during Tan Sri Muhyiddin Yassin’s premiership and are showing confidence in the possibility of Datuk Seri Anwar Ibrahim becoming prime minister,” says the 65-year-old.

“We are seeing a huge wave of support for PH from PAS supporters. Of course, you won’t see it in the open but we have seen a big shift through our ongoing liaisons in villages, like in Pendang, which is a PAS stronghold.”

Win some, lose some

With voters spoilt for choice, the race to win them over, particularly in Malay majority seats, may be a tough one for Umno, said to be afflicted by infighting between factions that could derail the party’s campaign.

According to unofficial forecasts, the groundswell against Umno may see the party winning only four seats — Padang Terap, Kubang Pasu, Jerlun and Kulim-Bandar Baharu — with the latter two seats possibly swinging to PN at the last minute.

It may be status quo for the four seats previously held by PH — Kuala Kedah, Sungai Petani, Padang Serai and Alor Setar — which are mainly mixed constituencies.

However, PAS (PN) may retain Pendang, Jerai and Sik, and wrest Baling from BN’s Datuk Azeez Rahim (who won with only a 1,074 majority in 2018), Merbok from PH and even Mahfuz’s Pokok Sena seat, which he held for five terms.

Previously an Umno-BN stronghold, Kedah lost interest in the coalition in 2008 when 11 of the 15 parliamentary seats were won by PKR and PAS. Although Umno recaptured 10 seats in 2013, the damage to the voter base was done, seeing that only two seats were retained in 2018.

With the entry of Parti Pribumi Bersatu Malaysia (Bersatu) and Pejuang Tanah Air, Umno’s position is suspect. Furthermore, Umno president Datuk Seri Ahmad Zahid Hamidi’s corruption charges and what some view as his arrogant demeanour have left a bad taste in the mouths of rural Malay voters.

Attempts to speak to Datuk Seri Jamil Khir Baharom were futile as he declined to take questions.

“PAS and BN have always shown that they have sufficient support in the state and remain competitive with each other,” says Dr Sivamurugan Pandian, professor of political sociology at USM’s School of Social Sciences. However, Pejuang has supporters in Langkawi, Jerlun and Kubang Pasu, he adds. “We may see tough fights in these constituencies.”

Ahmad Fauzi feels that except for former premier and Langkawi incumbent Tun Dr Mahathir Mohamad and his son Datuk Seri Mukhriz, who is defending his Jerlun seat, it is “fair to bet on a clear wipeout of Pejuang’s candidates in Kedah”.

The USM political science lecturer believes that Mahathir still commands respect among the senior citizens, having been the PM for much of their adult lives.

“But this voice will be submerged by that of the younger generation enabled by the automatic voter registration and Undi18, provided that they come out and vote. To this young cohort of voters, Mahathir’s second stint as PM was a disaster,” he points out.

Ahmad Fauzi opines that being a parliamentary election, Kedahans know very well that a change of state government is not possible. Thus, issues such as the “less than efficient” water management by state water company Syarikat Air Darul Aman (SADA), will not make a difference in this general election.

With PN depending to a large extent on PAS’ extensive rural network in Kedah, he expects the coalition to win the largest number of seats there. “Being ruled by a PAS government is not dishonourable for Kedahans,” he adds.

For hoteliers and businesses, the party that governs the state makes no difference to them, only because development has been slow with any government in Kedah.

“The hotel sector is seeing a recovery in tourism but we don’t have enough workers and there is no state-sponsored publicity to lure visitors,” says Eugene Reuben Dass, chairman of the Malaysian Association of Hotels (Kedah and Perlis chapter).

Although hoteliers are impacted by this issue post-pandemic, the lack of support for the sector has persisted under several state administrations.

“There ought to be more tourism programmes in Kedah but we notice a lack of will on the part of the government. I am not sure if it’s because they are not keen or if there is no expertise to do it,” says Dass, who has worked in the state’s hotel sector for more than a decade. “We will just continue doing what we do within our means.”

Meanwhile, tragedy struck when PH’s candidate for the Padang Serai constituency, M Karupaiya, 70, passed away unexpectedly on Nov 16. The former army officer had fallen during the campaign trail and was hospitalised before his death.

GE15 would have been the PKR member’s second outing. In GE14, Karupaiya defeated MCA’s Leong Yong Kong and PAS’ Muhammad Sobri Osman with a majority of 8,813 votes.

The Election Commission meets on Nov 18 to decide on the status of polling for the Padang Serai seat.