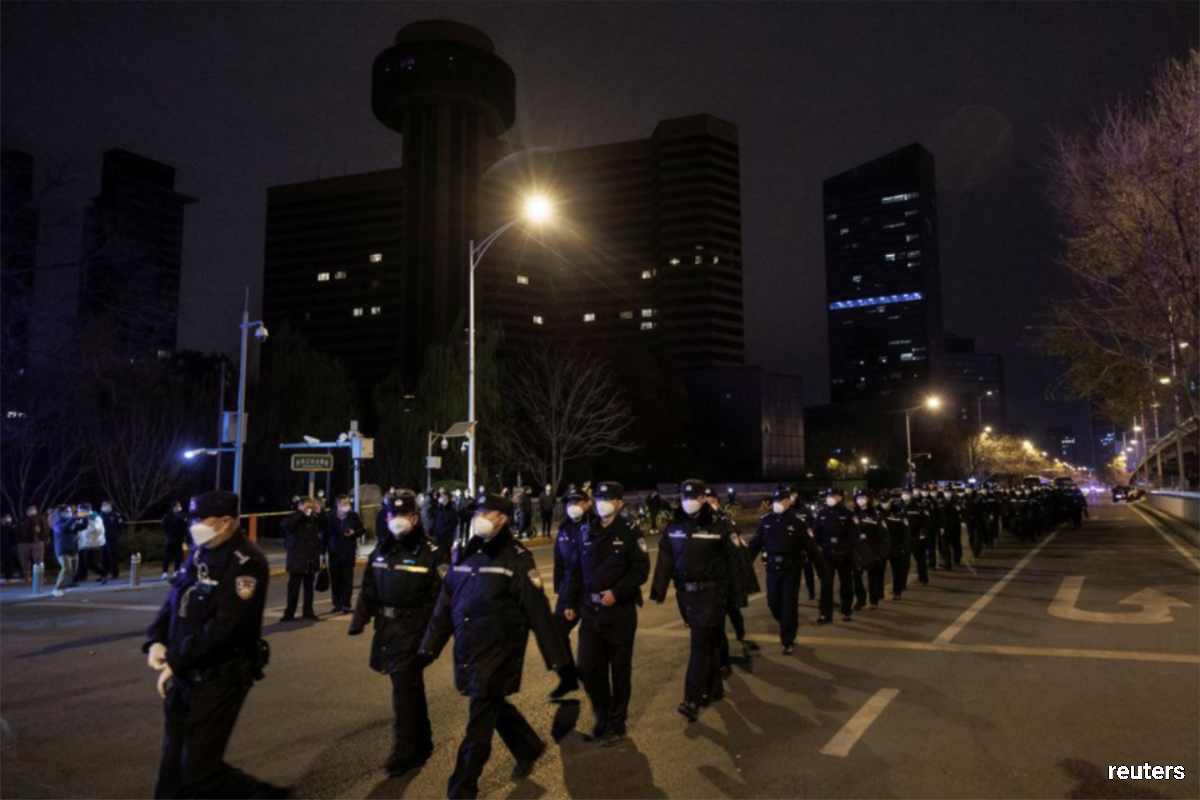 Police arriving at a protest against Covid-19 restrictions after a vigil for the victims of a fire in Urumqi, as outbreaks of Covid-19 continued, in Beijing, China on Monday (Nov 28).

The clashes in the southern city marked an escalation from protests in the commercial hub of Shanghai, capital Beijing and other cities over the weekend in mainland China’s biggest wave of civil disobedience since President Xi Jinping took power a decade ago.

The clashes in the southern city marked an escalation from protests in the commercial hub of Shanghai, capital Beijing and other cities over the weekend in mainland China's biggest wave of civil disobedience since President Xi Jinping took power a decade ago.

Resentment is growing as China's Covid-hit economy sputters after decades of breakneck growth, which formed the basis of an unwritten social contract between the ruling Communist Party and a population whose freedoms have been dramatically curtailed under Xi.

In one video posted on Twitter, dozens of riot police in all-white pandemic gear, holding shields over their heads, advanced in formation over what appeared to be torn down lockdown barriers as objects fly at them.

Police were later seen escorting a row of people in handcuffs to an unknown location.

Another video clip showed people throwing objects at the police, while a third showed a tear gas canister landing in the middle of a small crowd on a narrow street, with people then running to escape the fumes.

Reuters verified that the videos were filmed in Guangzhou's Haizhu district, the scene of Covid-related unrest two weeks ago, but could not determine when the clips were taken or the exact sequence of events and what sparked the clashes.

Social media posts said the clashes took place on Tuesday night and were caused by a dispute over lockdown curbs.

The government of Guangzhou, a city hard-hit in the latest wave of infections, did not immediately respond to a request for comment.

Home to many migrant factory workers, Guangzhou is a sprawling port city north of Hong Kong in Guangdong province, where officials announced late on Tuesday they would allow close contacts of Covid cases to quarantine at home rather than being forced to go to shelters.

The decision broke with the usual practice under China's zero-Covid policy.

In Zhengzhou, the site of a big Foxconn factory making Apple iPhones that has been the scene of worker unrest over Covid, officials announced the "orderly" resumption of businesses, including supermarkets, gyms and restaurants.

However, they also published a long list of buildings that would remain under lockdown.

Hours before those announcements, national health officials said on Tuesday that China would respond to "urgent concerns" raised by the public and that Covid rules should be implemented more flexibly, according to each region's conditions.

But while the easing of some measures, which comes as China posts daily record numbers of Covid cases, appears to be an attempt to appease the public, authorities have also begun to seek out those who have been at recent protests.

"Police came to my front door to ask me about it all and get me to complete a written record," a Beijing resident who declined to be identified told Reuters on Wednesday.

Another resident said some friends who posted videos of protests on social media were taken to a police station and asked to sign a promise they "would not do that again".

It was not clear how authorities identified the people they wanted questioned, nor how many such people authorities contacted.

On Wednesday, several police cars and security personnel were posted at an eastern Beijing bridge where a protest took place three days earlier.

In a statement that did not refer to the protests, the Communist Party's top body in charge of law enforcement agencies said late on Tuesday that China would resolutely crack down on "the infiltration and sabotage activities of hostile forces".

The Central Political and Legal Affairs Commission also said "illegal and criminal acts that disrupt social order" would not be tolerated.

The foreign ministry has said rights and freedoms must be exercised within the law.

White House national security spokesperson John Kirby said on Tuesday that protesters in China should not be harmed.

Covid has spread despite China largely isolating itself from the world and demanding significant sacrifices from hundreds of millions to comply with relentless testing and prolonged isolation.

While infections and death numbers are low by global standards, analysts say that a reopening before increasing vaccination rates could lead to widespread illness and deaths and overwhelm hospitals.

Chinese stocks were steady, with markets weighing endemic economic weakness against hopes that the public pressure could push China to eventually reopen.