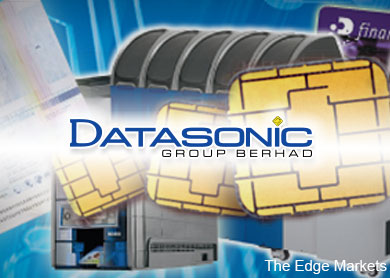 Earnings per share was 0.7 sen, versus 2.05 sen in the preceding quarter.

About 63%, RM33.61 million of its revenue is derived from the supply of smart cards, datapages and personalisation solutions.

For the previous corresponding quarter ended Sept 30 last year, Datasonic posted net profit of RM23.4 million or 17.37 sen per share. Revenue was at RM69.9 million for the quarter.

There is no comparison with the corresponding quarter in the preceding year, due to the change of financial year end from Dec 31 to March 31.

“The group's performance for the remaining quarters of the financial period ending March 31, 2015, is expected to be satisfactory, barring any unforeseen circumstances,” said Datasonic.

Datasonic share price plunged to an intra-day low of RM1.02 — down 19 sen or 18.6% this morning, against yesterday’s closing. The stock regained some lost ground to end the morning session at RM1.12, with 8.11 million shares having changed hands.