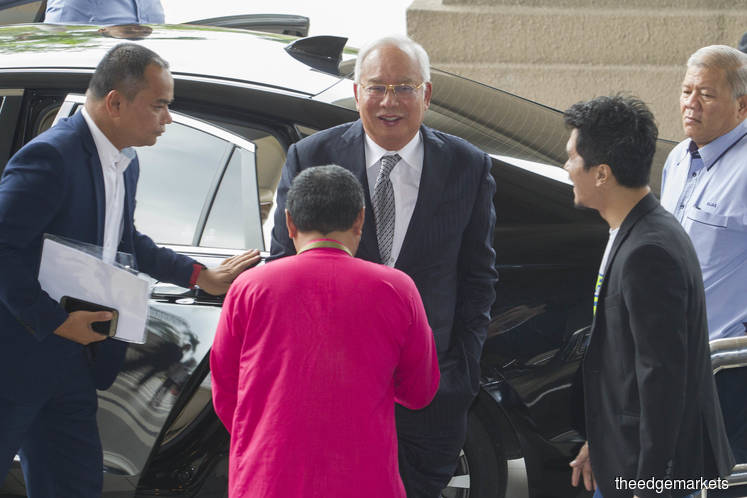 One of the deputy public prosecutors, Donald Joseph Franklin.

KUALA LUMPUR (April 26): The defence in Datuk Seri Najib Razak's SRC International Sdn Bhd trial wants the High Court to stay or quash the seven charges of criminal breach of trust (CBT), money laundering and abuse of power unless they are amended, on the grounds that they are defective and constitute an abuse of the court process.

The former premier's counsel Datuk Yusof Zainal Abiden said it was vital for the prosecution to properly frame the charges on Najib so as to meet the conditions and law of framing the charges as stipulated under Sections 152, 153, 154 and 155 of the Criminal Procedure Code.

He added that the charge that is framed does not give Najib sufficient notice in which the offence he is alleged of as this is to ensure specificity.

Yusof pointed to Najib's CBT charges where he is an agent, being the prime minister, finance minister and the advisor emeritus of SRC, which shows a lack of clarity and specificity.

"In this case, the prosecution has failed to specify which of the five possible types of CBT under Section 405 of the Penal Code that Najib is alleged to have committed," Yusof added.

The five possible types of CBT are:

Yusof, who was formerly Solicitor-General II until he retired from service in 2012, added that in the three CBT charges, Najib was charged in his capacity as the PM, finance minister and SRC's advisor emeritus when he was named as an agent to the charge.

However, he said based on the charges, Najib is left guessing whether he is being alleged as an agent to all three positions combined (PM, finance minister and advisor emeritus) or arising from each position.

The lawyer who appeared with Datuk Kamarul Hisham Kamaruddin, Datuk Chong Loong Men, Devanandan S Subramaniam and Alex Tan, further submitted that it was unfair for the prosecution to charge their client with three counts of CBT and abuse of power at the same time and link the charges with money laundering.

"The alleged CBT and abuse of power seems similar and it is unfair to impose duplicity of charges as it seems a violation of his right under Article 5 to his right of a fair trial," he said.

"The question whether a charge under the Malaysian Anti-Corruption Act (which Najib is charged for abuse of power) can be framed and tried concurrently with the CBT charges as both of them involve the same sum of RM42 million," he said.

For this reason, Yusof asked that Najib be discharged of the charges.

Lawyer and appointed prosecutor Datuk V Sithambaram responded, saying the charges under the Malaysia Anti-Corruption Commission (MACC) Act 2008, money laundering and CBT, are not composed of the same ingredients of offences.

He further told the court that there was no duplicity in the charges, and until yesterday, 21 witnesses had testified and were cross-examined by the lawyers.

"This shows that the accused had not been misled or that there is a miscarriage of justice done by the prosecution," the lawyer-turned-prosecutor said.

Sithambaram, who appeared with Deputy Public Prosecutors Budiman Lutfi Mohamed, Donald Joseph Franklin, and Muhammad Izzat Fauzan, said today's criminal trial is different from those conducted in the past because when someone is charged, the prosecution also gives the accused the evidence that would be used against them in the trial.

"Like in this case, there are 35 volumes and 7,000 pages of documents which had already been given to the accused," he said.

The lawyer-turned-prosecutor added the defence led by Tan Sri Muhammad Shafee Abdullah did not object to the combined or joinder of the charges for trial when the prosecution made the application and in fact supported it.

"Now, they (the defence) come and say there should be a misjoinder of the charges. The accused is never prejudiced in this case.

"Furthermore, the issue raised here can also be raised after the prosecution finished this case," he said, adding under the law, the prosecution is also allowed to amend the charge during the trial.

For this reason, Sithambaram added that there was no basis for the defence to ask for a discharge of the charges made, as the trial had already proceeded, and the prosecution asked that this application to be dismissed.

Justice Mohd Nazlan Mohd Ghazali fixed Monday at 9am to deliver his decision on the application.