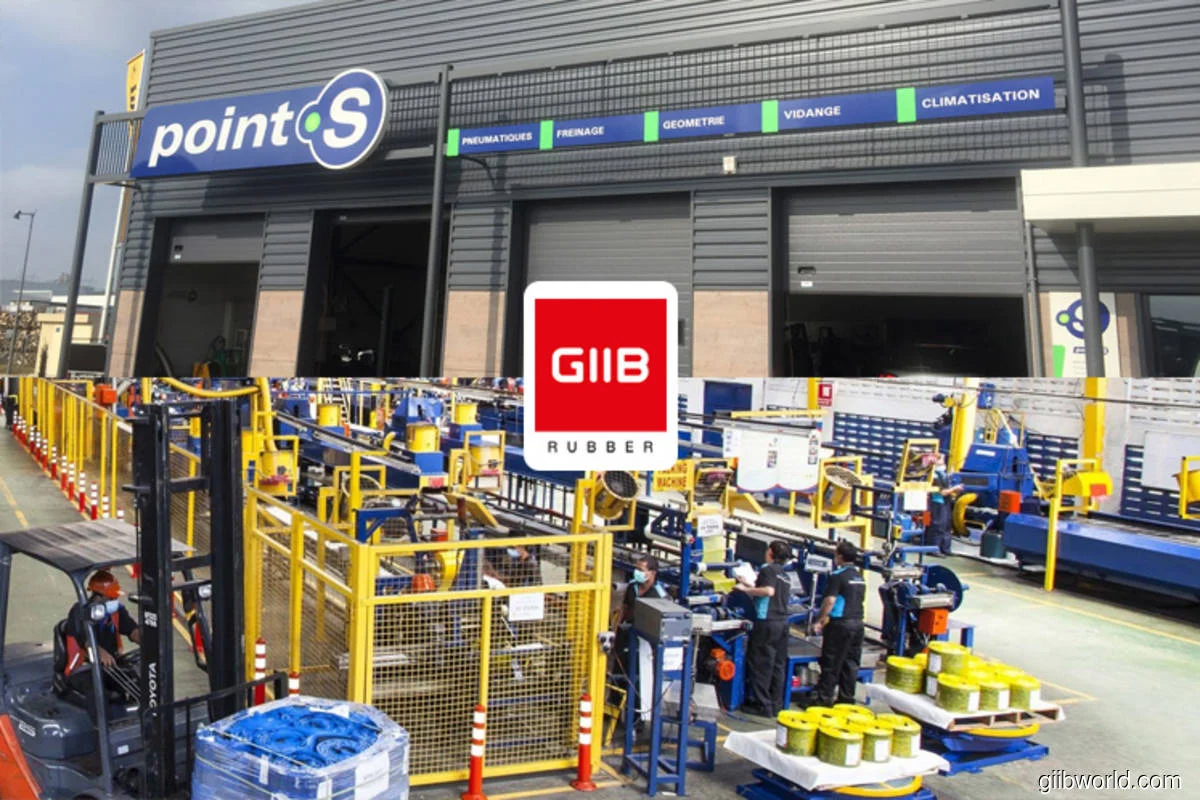 RUBBER compound manufacturer GIIB Holdings Bhd has been in the news for all the wrong reasons this year. The group has been locked in a dispute with one of its seven directors for months over allegations of fraud and misconduct. Both sides have filed a complaint against each other with the police.

In the latest escalation of the dispute, former executive director (ED) Wong Weng Yew — who was recently re-designated as non-independent non-ED after a two-month suspension due to alleged misconduct — has filed a suit against GIIB, as well as three members of the board, namely executive chairman and CEO Tai Boon Wee, his sons Tai Qiyao and Tai Qisheng, as well as Alison Wong Ping Kiong, who is ED of GIIB subsidiary, GIIB Rubber Compound Sdn Bhd. Weng Yew is seeking a declaration that his suspension and termination as ED taken by GIIB are null and void, among others.

The eight-page originating summons was filed in the Shah Alam High Court on May 18, although the announcement to Bursa Malaysia was made on May 30. In an affidavit in support of the application sighted by The Edge, Weng Yew claims to have found several suspicious transactions in the group made by the four defendants “knowingly and dishonestly” since his appointment as ED on Feb 23 last year.

On May 19, GIIB announced that its audit and risk management committee had decided to conduct a forensic investigation into the financials of the group in relation to the transactions that Weng Yew had highlighted but it did not disclose what they were until Bursa Securities issued a query.

In its reply dated May 23, GIIB said the suspicious transactions highlighted by Weng Yew include the sale of machinery by GIIB Rubber Compound for RM2.95 million; sale of assets by Big Wheel Green Tyres Sdn Bhd and settlement of a dispute amounting to RM2.68 million and RM5 million respectively; renovation costs by Goodway Marketing Sdn Bhd amounting to RM62,000 and rental deposits and utilities totalling RM16,000; and RM786,062 allegedly owed to Weng Yew.

GIIB had also said that the expected deadline to appoint an independent audit firm to conduct the forensic investigation would be end-May, with the forensic audit slated to commence in early June.

But investors hoping that this dispute would be resolved anytime soon would be left wanting. The most recent update on the matter reveals that GIIB is still in the midst of finalising the scope of investigation with the shortlisted audit firm to undertake the forensic investigation and is now targeting to appoint the firm in early June.

Amid the ongoing dispute, GIIB shareholders will be wondering about hanging on to their investments now. Its annual reports show that even before the pandemic, the group has been loss-making since FY2014, except in FY2018 when it recorded a net profit of RM2.13 million, thanks to profit recognised from its property segment, particularly Phase 1 of its Big Wheel Industrial Park project in Sabah.

It has been posting 15 straight quarters of net losses and is expected to remain in the red for the April-June 2022 quarter. Meanwhile, revenue has been trending downwards during the past three years due to the Covid-19 outbreak affecting both its operations and trade. However, CEO Boon Wee believes that with the worst of the Covid-19 pandemic over, the group is at a turning point. He expects GIIB to return to profitability in its fiscal first quarter ending Sept 30, 2022 (1QFY2023).

GIIB has changed its financial year end in FY2022 to June 30 from Dec 31 to facilitate the recent investigation into the management and handling of the glove business as well as GIIB and its subsidiaries’ accounts. The financial results of the group for the 15 months ended March 31, 2022, show a net loss of RM24.61 million on revenue of RM44.66 million.

“For one thing, our rubber compound manufacturing business is almost back to normal as the economy reopens. We are seeing an increase in sales orders. The key is to ensure our financials remain stable and strong, and we should be able to recover on a good (upward) trajectory,” Boon Wee tells The Edge in an interview. The rubber compound segment accounted for 69% of GIIB’s total revenue of RM36.91 million for FY2020.

Formerly known as Goodway Integrated Industries Bhd, GIIB has been in the business of rubber compounding for over 30 years, manufacturing materials for products used in the engineering, automotive and aeronautical industries. It is also in the downstream tyre retreading business, but faces stiff competition from China, which is able to produce tyres at a much lower cost.

“We were doing quite well in the rubber compounding business until 2015 when there was a shift in the tyre industry. The introduction of China tyres at low prices had affected the demand for our products, as about 70% of our products were for the tyre retreading industry,” Boon Wee recalls.

Now, GIIB is not too concerned about competition from China as the group has pivoted to the manufacturing of technical rubber compounds, which commands higher margins because of the additional expertise required, says Qiyao, who is the group corporate manager of GIIB. He was appointed ED effective June 1. “We co-develop formulations with our customers and then manufacture these specialised rubber materials, and where our relationship with our customers becomes more sticky,” he adds.

Qiyao says the group has also been looking to sell assets, shore up its balance sheet and pare down debts to improve its financial standing. Net debt at end-March 2022 stood at RM9.9 million, translating into a gearing ratio of 0.16 times.

Qiyao: In terms of our debts, we are more lightweight now (Photo by Patrick Goh/The Edge)

“Our debt ballooned to RM140 million at the peak. However, we have spent the last three years disposing of our assets such as land, properties and machinery to repay the loans. By end-2019, we managed to restructure our debt financing with our lenders. In terms of our debts, we are more lightweight now. We have also lowered a lot of our costs during the pandemic, which forced us to be as lean as possible,” he adds.

Still, sceptics remain unconvinced that GIIB will turn a profit in FY2023, noting that it had not had much success in turning around its core business in rubber compounding and rubber technology even before the pandemic.

Will the rubber glove business be a game changer?

In November 2020, GIIB had announced plans to diversify into the manufacturing of rubber gloves as part of its strategy to turn around its financial performance. However, industry players observe that GIIB’s venture into the rubber glove business comes at a time when the glove mania in Bursa Malaysia that started in 2020 has ended.

Under the joint venture (JV), GIIB has a 51% stake in GIIB Healthcare Products Sdn Bhd while the remaining 49% is held by Yee Voon Hon, who has 10 years of experience in glove dipping lines and the setting up of production lines. He is tasked to undertake the sale and distribution of gloves.

To fund the diversification, GIIB had undertaken a one-for-one rights issue, together with free warrants on the basis of one warrant for every one rights share subscribed, to raise RM65.33 million.

However, the partnership turned sour when Yee — through Glomaxes Latex Glove Manufacturer Sdn Bhd, where he is a director — issued a winding-up notice to GIIB Healthcare. Glomaxes is the main contractor for GIIB Healthcare’s glove production lines. Accordingly, GIIB Healthcare filed a Fortuna injunction in the High Court to stop Glomaxes from presenting a winding-up petition against the company.

According to Qiyao, the matter is still in the process of dispute resolution. “We are still trying to find ways to resolve the management dispute in the JV. In the meantime, we have started the first of five production lines at our glove manufacturing plant in Nilai, Negeri Sembilan, on May 16 and are now trying to stabilise the operations and quality (of the latex gloves),” he says, adding that he expects all five production lines to be up and running in six months.

Boon Wee says the group has already received requests for indicative orders from distributors of rubber gloves. “We expect the glove business to start contributing to the group this month. In fact, we see it overtaking the rubber compound business in the future.”

He also dismisses concerns that many of the new entrants to the glove market are still struggling to turn a profit, noting that the group can leverage its 30-year experience in the rubber business and network.

“We already have an existing manufacturing facility in Nilai, with ready access to electricity, water and gas. We can use some of the equipment, so we are able to have more efficiency in terms of our operations.

“We also believe the margin and growth of the glove industry are still favourable compared with other manufacturing industries. We cannot expect the average selling price for gloves to match the levels seen during the pandemic Also, we didn’t venture into the glove business because of the boom. That was not our objective,” he says.

He adds that when compared to its bigger peers like Top Glove Corp Bhd, GIIB’s capacity is only 1% of the former’s. “So, we can be selective (by targeting) niche markets — where we want to sell and who we want to sell to.” Cloud of uncertainty hangs over GIIB

GIIB shares have slumped since their peak of 91 sen in November 2020. The counter is down 23% year to date, closing at 10 sen last Thursday, valuing the group at RM56.17 million.

Weng Yew did not immediately respond to a request for comment. However, those close to him say he is committed to pursuing the alleged fraudulent transactions in GIIB.

At the time of writing, GIIB and GIIB Healthcare had launched a countersuit against Weng Yew, Yee and Glomaxes, as well as four other individuals namely Yee Kwek Keong, Yap Kwee Heong, Ewe Ee May and Michelle Sammy, alleging a conspiracy to injure the company and breach of fiduciary duties. It is also seeking damages of RM103.58 million and any other reliefs deemed fit by the court. The plaintiffs’ legal team is led by former Federal Court judge Datuk Seri Gopal Sri Ram.

“It is quite unfortunate this happened. For us, we only believe in running the business and delivering value to shareholders. The past years have been very challenging, but I think our efforts to turn around the company have reached a major turning point. We are at the tipping point where we can go either way,” says Qiyao.

Only time will tell if the current management’s turnaround efforts will materialise. Meanwhile, all eyes will be on the forensic investigation into the suspicious transactions, the timing and outcome of which remain uncertain.