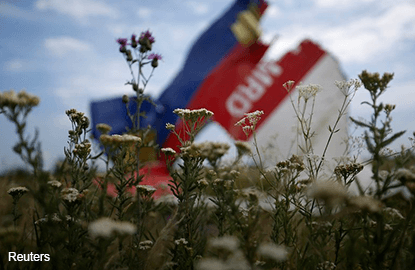 (Nov 30): Dutch police have suspended an officer who tried to sell online souvenirs said to have come from the wreckage of Malaysia Airlines flight MH17 shot down over war-torn Ukraine last year.

An investigation has been launched and the man is under arrest for embezzlement, police said in a statement late Sunday.

He had tried to sell "a piece of the clothing he used at the crash site" when teams were investigating the disaster involving the plane flying from Amsterdam to Kuala Lumpur, the statement added.

All 298 people on board MH17, mostly Dutch citizens, were killed when the plane was hit by a Russian-made BUK missile fired from territory held by pro-Russian rebels in July last year, according to a Dutch-led inquiry.

Apart from the clothing, the man had also tried to sell on the Dutch website Marktplaats (Marketplace) a packet of Malaysia Airlines tissues and another unknown item which allegedly came from the downed plane.

Marktplaats told Dutch television NOS that the "offensive" link had now been removed from the site.

The man had tried to sell the items for €1,500 (RM 6,757), billing them as a "wall decoration" made from a jacket and cap given to the investigators, as well as the tissues and what he said was "a piece of the hull", NOS reported.

The police said "further research will determine" whether the items actually came from the plane.

The prosecution service has also launched an investigation. No details of the police officer's identity were revealed. – AFP