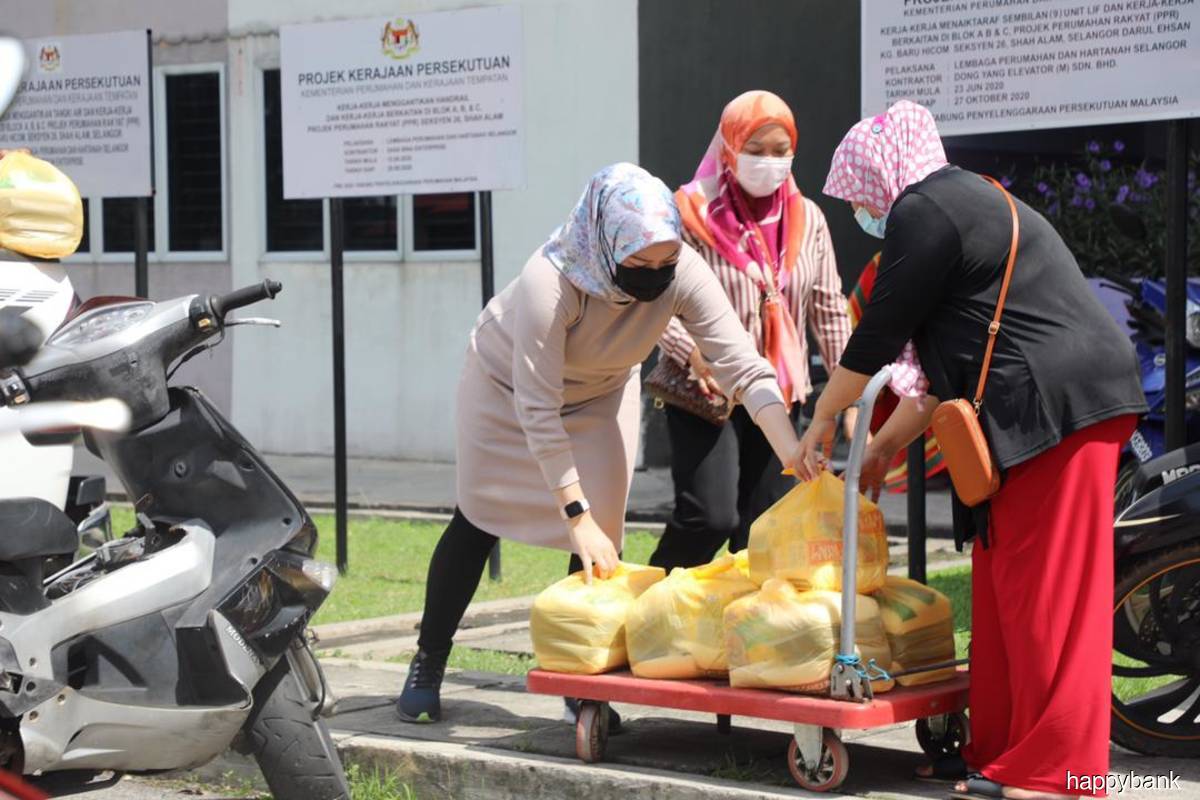 KUALA LUMPUR (July 15): The increasing number of Covid-19 infections and ensuing lockdowns have forced many to openly reach out for assistance to make ends meet. Online grocers and e-commerce businesses have risen to the occasion, offering to facilitate aid in the form of groceries and essential bundles to those in need.

E-commerce giants like Shopee dedicated a section with listings of essential packages as an extension of the #kitajagakita movement. Meanwhile, delivery platforms such as HappyFresh have tied up with retailers to provide grocery bundles – both platforms allow customers to purchase pre-selected goods and have them delivered directly to the impoverished.

The movement started right after Selangor and 15 localities in the Federal Territory were placed under the Enhanced Movement Control Order (EMCO) on July 3.

As residents from affected areas are not allowed to leave their homes and only one representative per household is allowed to exit to purchase essential supplies, that too within a 10km radius, many have been unable to help others directly.

Ever since the MCO was reinstituted on June 1, many B40 households were hard pressed to make ends meet. The government hoped to soften the blow of a total lockdown, by announcing a fresh set of stimulus packages amounting to RM150 billion, with RM10 billion allocated for direct fiscal injection and RM10 billion in direct cash aid to the people, but the first stage of the cash aid rollout does not happen until August.

On June 29, the police revealed that there were 468 suicides between January and May this year, which works out to an average of three suicides a day. This is a substantial increase, when compared to a 2018 police report citing 1,696 deaths by suicide between 2014 and 2018, which is less than one suicide a day.

While the reasons for suicides have not been ascertained, many have associated the incidences to Covid-induced stress such as unemployment and consequently, severe financial difficulties.

Putting two and two together, several Malaysians took to social media, appealing to those in need of help to raise a white flag – in hopes of reaching out to those in need to prevent more suicides – which caused the #benderaputih (white flag) movement to go viral.

H&S Grocery Sdn Bhd, which is also one of the participating merchants on Shopee’s #kitajagakita initiative, made a collection of essential packages available on the platform, much ahead of the #benderaputih movement. “Because of the #benderaputih [initiative], there have been more people buying from us,” says H&S’ spokesperson, who only wants to be known as Emery.

The #benderaputih movement has drawn attention to the grocer’s presence on Shopee, but people still prefer to communicate directly with H&S Grocery to customise contents of the grocery bundles, and sometimes to make loose orders, says Emery.

“For example, I had a customer who ordered 5kg of onions, 5kg of potatoes, 10 cans of sardines and more individually for Uncle Kentang [moniker for Kuan Chee Heng, a renowned social activist].”

According to Emery, religious and corporate establishments also ordered groceries for charity purposes.

HappyFresh also rebooted its support programme, where customers can choose to donate RM2 upon checkout to the less fortunate. Customers can also choose from RM50 or RM100 grocery bundles from Pasaraya OTK, under the KitaJagaKita option within the app, to donate to the Lighthouse Welfare Children House in Bangsar. It plans to include more non-governmental organisations (NGO) in the future.

Humanitarian NGOs that were raising funds under #benderaputih for vulnerable groups have also opted to support small-to-medium-sized grocers such as H&S Grocery, instead of buying supplies from supermarket chains.

“We work with small kedai runcit or shops that are probably affected by the pandemic,” says Ainie Faziqa, co-founder of Happy Bank – a NGO that works with disadvantaged communities.

Happy Bank posted on social media that the organisation had helped 3,189 households between June 1 and June 30. “At that point of time, we saw people who were retrenched or had their salaries cut, needing aid in the form of food mostly. It is the most basic necessity,” says Ainie.

The organisation, which started in 2014, is committed to providing food aid to people and their impoverished families who earn a living on a day by day basis.

Restaurant operators and fresh food companies are also doing their part by raising funds, donating a portion of their profits or donating food directly. For example, Tropicana-based bakery Crunch by Raz is dedicating 50% of its sales to food banks and people in need. Meanwhile, Nasi Lemak Saleha – a famous outlet in Sri Rampai, Wangsa Maju – has included a listing for customers that order via Grab to sponsor a meal for the delivery platform’s riders.

Seafood wholesaler and retailer Syarikat Tuah Bersaudara on the other hand, opted to allocate space for a food bank at its Shah Alam base, where those in need can obtain fresh fish, meat and vegetables.