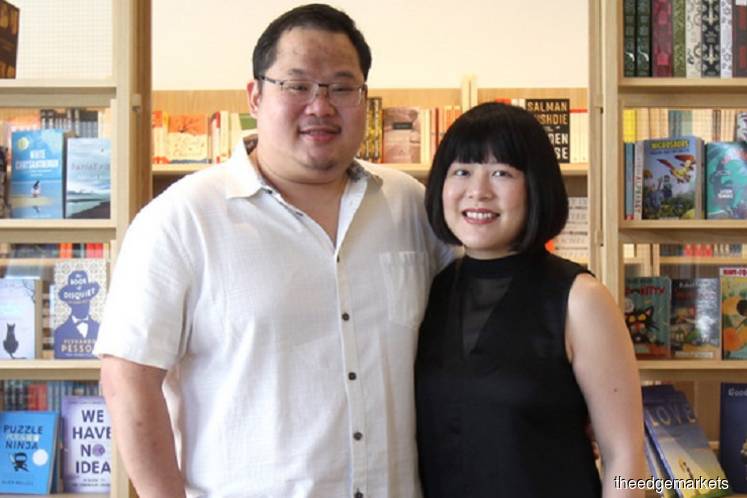 The pandemic has not been kind to many businesses that were forced to shut their doors for nearly three months. By now, we’re familiar with the story of how many brick-and-mortar stores had to quickly shift their focus to online platforms.

This process was more painful for small and independent businesses without a huge online presence. Those in the book industry, in particular, had to handle this while grappling with the already tough market for bookstores in Malaysia.

“We didn’t have a concrete plan for an online store prior to the MCO as we are very much an old-fashioned, mom-and-pop store. We run the store ourselves and get to know our customers personally and cater to their reading preferences,” says Elaine Lau, co-founder of Petaling Jaya-based Lit Books.

“We had to completely rethink that when the Movement Control Order (MCO) was implemented. Within a week, we set up a basic online store on our website. Thank goodness [co-founder Fong] Min Hun knows a thing or two about how to set one up!”

The founders like to foster a sense of community among like-minded people by holding literary events and quiz nights in the store. The MCO halted these physical meet ups.

“Pivoting to an online model was necessary for survival, and we’re very thankful to our regulars who have been supportive, as well as new customers who’ve discovered us, thanks to the many kind folks who put up social media posts to support small, independent businesses,” says Lau.

Meanwhile, Bangsar-based Silverfish Books also had to rely on its online sales during the MCO. There was no income in those few months, says director Raman Krishnan, but fortunately, the landlord granted the company a rental waiver.

“Since we run a rather specialised business, where most of our books are not available anywhere else and are for serious readers and collectors, we expect our business to normalise,” says Raman.

Can independent bookstores and publishers survive?

While there has been news about the closure of major bookshops in Malaysia, there are also concerns about the fate of book publishers. Both were problems that existed before the MCO. Some trends that might emerge from these challenges are the rise of online bookstores and self-publishing.

“Worryingly, we are hearing other rumours that some local publishers and other chains might be in trouble as well. If this were to pass, then book buyers will have no choice but to purchase books online,” says Fong.

“As to whether we can expect to see more independent pop-up [bookstores], it’s a difficult question to answer because it’s not an easy business to sustain. Moreover, when we do see small booksellers pop up, they tend to focus on discount or remaindered books because of their lighter inventory cost.”

Silverfish Books, which is also a publisher of Malaysian writing in English, will not only focus on online sales going forward, but also push for the self-publishing trend. The company assists writers who are interested in self-publishing by providing international standard professional design services and educates the writers on packaging and marketing.

“Our self-publishing project will become more important [after the MCO] too. The book industry everywhere is no longer what it was. There are few bookshops left in Klang Valley compared to the dozens of megastores just five to 10 years ago. There is nowhere to sell books once published, and more stories are consumed online than from pages,” he says, adding that the quality of books have declined and many Anglo-American publishers have become risk averse in their choices.

These publishers, unfortunately, control the majority of the Malaysia and Singapore book markets, Raman adds, giving them the power to determine book prices. “They also get to control who gets which shelf space in major stores. Malaysian writers, if at all, will be given the bottom row at the back of the shop.”

To reverse that trend, publishers have to evolve. They need to be even more selective of the books they publish, for instance. “All our books have to be boutique editions or collectors’ items. Distribution systems and marketing methods will change. We need to adjust to a new normal that is still in flux,” says Raman.

What can be done to support the industry?

There are still factors that set physical bookstores apart from purely-online ones. As Fong says, “It is no longer sufficient for bookshops to simply stock as many titles as they can and expect the books to sell themselves.” This is because, as he points out, people can just purchase the books online for themselves.

“The role of the bookseller becomes more important as a guide to recommend books and help book lovers find the right title for them. This is a relationship of trust that must be built over time. Sadly, there is very little training, if any, for booksellers in this country and most bookshop staff are ill-prepared to deal with customer requests,” says Fong.

Physical bookstores are also important places to gather the like-minded for literary events. One suggestion he has for the government is to offer more resources to encourage the growth of bookshops, especially since Kuala Lumpur was named the World Book Capital for 2020.

“Off the top of my head, I would suggest that bookshops receive greater tax relief or grants to help offset their fixed costs to help them become more sustainable. The industry is small enough that these breaks will not have a substantial impact on the government’s purse, and may indeed be a good investment for the future of the country,” says Fong.

Perspective from an online bookseller

The MCO accelerated the sales of Books n Bobs, an online second-hand bookstore, by 100%, says founder Rachel Ang. She hit her sales target for the year in April. Although the numbers have gone down since then, it convinced Ang that she should take the business to a different level moving forward. As a book lover, Ang started off by selling second-hand books through Facebook four years ago. Last year, she launched the webstore.

“During the MCO, my stock began to run low and I was worried because my suppliers were closed. I had to ask the public to sell us their second-hand books. A good thing at that time was people were stuck at home, so they could declutter and clear their books,” says Ang.

This experience allowed Ang to expand the genres that she carries on Books n Bobs. She sells over 1,000 books a month via the website.

Now that the attention from the MCO is starting to wear off, Ang hopes to hold onto the new customers. Digital is the way to go for booksellers, she says, as it is where the consumer demand is.

But it is not without challenges. “There is a lot of noise online. It will become harder to attract the attention of consumers, especially as we are heading towards an economic downturn and people have less money to spend.”

While maintaining an online store may incur less cost than a physical bookstore, Ang is also limited by the fact that she is running a small and self-funded business. She’s hoping to find investments to expand.

“I would like to set up a proper office and warehouse, so my team and I can work comfortably and increase our stock level. Right now, we’re working from my home,” she says.