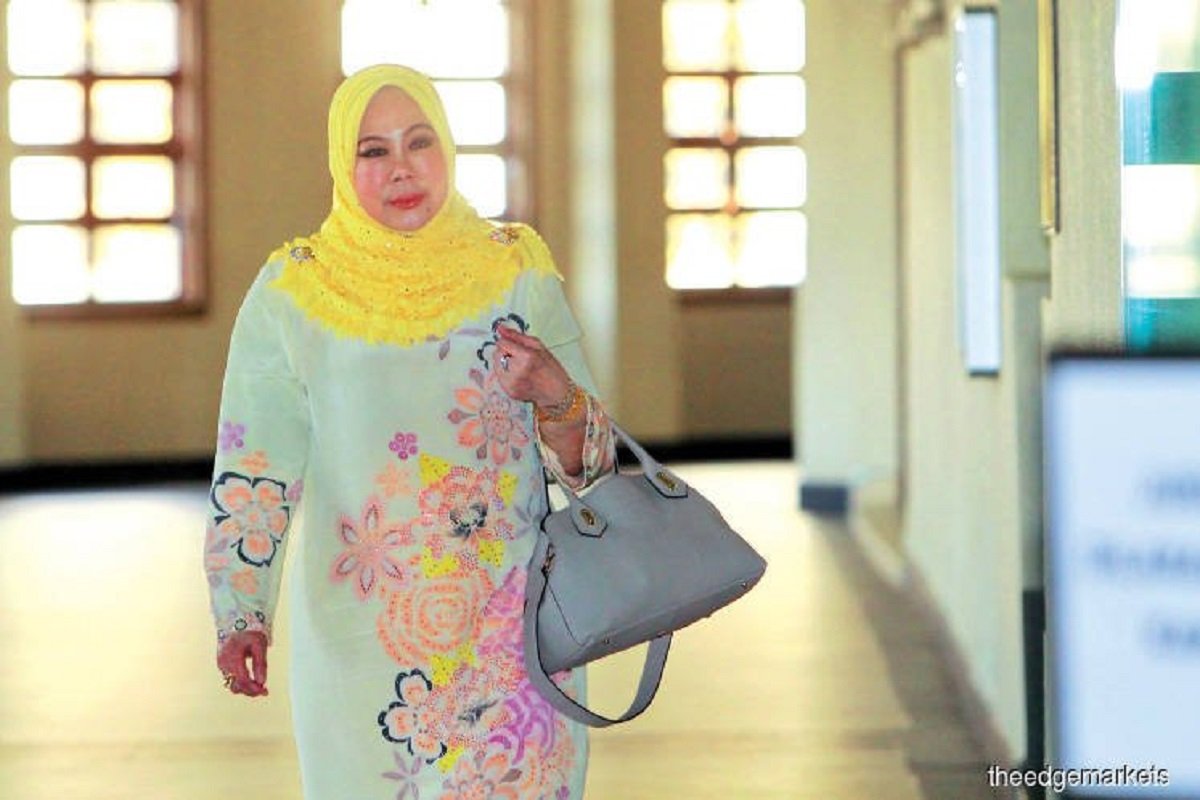 Madinah took the office of the auditor-general in February 2017 after the audit report was amended and given to the parliamentary PAC the previous year. (Photo by The Edge)

KUALA LUMPUR (March 31): Former auditor-general Tan Sri Dr Madinah Mohamad testified that while she did not listen to the audio recording made by the National Audit Department's (NAD) Datuk Nor Salwani Muhammad, she relied on the briefing given to her by her officers and Salwani herself regarding the final 1Malaysia Development Bhd (1MDB) audit report which was amended.

The infamous recording captures a meeting on Feb 24, 2016, chaired by then chief secretary to the government Tan Sri Dr Ali Hamsa, which discussed omissions and changes to the final 1MDB audit report before it was handed to the Public Accounts Committee (PAC) the next month.

According to earlier testimonials, the meeting — which lasted about two hours and forty minutes — was held on Datuk Seri Najib Razak’s orders, and the audio clip of the meeting was used as evidence in court and forms the crux of the case against the former prime minister and former 1MDB chief executive officer Arul Kanda Kandasamy.

Madinah took the office of the auditor-general in February 2017 after the audit report was amended and given to the parliamentary PAC the previous year.

In the trial on Thursday (March 31), Najib’s lawyer Tan Sri Muhammad Shafee Abdullah accused Salwani of being “prone to exaggeration” and exaggerating to Madinah in her briefing.

Madinah then defended Salwani’s briefing, saying that when the briefing was given, there were two other officers who attended it and they had also attended the Feb 24, 2016 meeting.

She said that the two officers corroborated what Salwani said about the circumstances in which her predecessor, Tan Sri Ambrin Buang, had taken instructions in the meeting to amend the report.

“When I received the briefing from Salwani, there were two lady officers present. They told me the circumstances in which he (Ambrin) was directed, what he said after [leaving] the meeting room and what Salwani said after [leaving] the meeting room. Both officers agreed … the two officers did not object to the events which [Salwani] told me. I had to rely on what they told me,” she told the court.

Shafee then asked her why she had not taken a look at the recording of the Feb 24 meeting and instead relied on Salwani’s briefing, contending that in the recording, no one was put under pressure to amend the report.

Shafee: You had primary evidence, the transcript that Salwani secretly recorded. The recording will tell you that nobody was put under pressure.

Madinah: I did not have access to the transcript because Salwani told me that the recording was in a hard drive, and when she attempted to hear it, some parts were not clear. I asked her to hand it to me to give to the cybersecurity lab so that they can transcribe it. They took more than a month or two. I didn’t have the privilege or time to read the transcript. It was never in my possession as I was retiring at that time.

Madinah said that she was told late in 2018 that Salwani had the recording but she was already on the verge of retiring.

Shafee then accused her of relying on “hearsay” from Salwani and forming her opinion based on what Salwani told her instead of relying on the minutes.

Madinah, however, said that Salwani’s story was corroborated and that she had asked Salwani many times about this version of events.

The first “original report” was published in 2016, but the content in the report was changed to omit several paragraphs and it was reprinted a second time on March 2, 2016.

In her press statement dated Nov 24, 2018, Madinah confirmed that the 2016 final NAD audit report on 1MDB was tampered with, and that orders to alter the report first came from Najib.

The two issues that were omitted from the second version were an audit finding on 1MDB’s audited financial statement in 2014, and the presence of fugitive businessman Low Taek Jho, better known as Jho Low, in a special meeting with 1MDB's board of directors.

On Thursday, Shafee asked Madinah whether Salwani had defied Ambrin’s order to destroy the report, which Shafee called a “draft” and not an original copy.

Shafee: She (Salwani) defied an order. She was instructed by her own boss to destroy what she called a draft. She defied that order.

Madinah: In a sense, yes.

Madinah declassified the report in 2018 when Tun Dr Mahathir Mohamad was the prime minister. After her meeting with Dr Mahathir at the time, she released a press statement saying that the document would be declassified.

Shafee on Thursday accused Madinah of trying to “curry favour” with Dr Mahathir at that time as everyone was losing their jobs and she wanted to save hers.

“I must tell you that you went to see Dr Mahathir because everyone was getting chopped, including the chief secretary [at the time, Ali Hamsa]. You wanted to protect your tenure. You wanted to be another Salwani,” he told her.

Previously, when Salwani was on the stand as a witness, Shafee said that she was awarded the datukship for keeping the evidence that proved the alleged tampering with the 1MDB audit report.

Salwani, however, disagreed with that suggestion.

She said she was nominated by the NAD for the Panglima Mahkota Wilayah (which carries the Datuk title) because she had served in the Ministry of Federal Territories and the NAD for almost 30 years.

Salwani is now the deputy attorney-general of the NAD.

She was the coordinator of the NAD's special 1MDB audit report team, tasked with auditing 1MDB in 2015 in order to be presented to the PAC.

She was praised for defying the order of then auditor-general Ambrin who had instructed her to destroy all copies of the 1MDB audit report. She instead retained the sole original copy in her safekeeping to be passed to the next auditor-general. Only the modified copy was submitted to Parliament's PAC.

In this trial, Najib is charged with abusing his power to amend the report before it was submitted to the PAC to protect himself from disciplinary, civil and criminal actions, while Arul Kanda is charged with abetting the former premier.

If convicted, they face a maximum jail term of 20 years and a fine of at least five times the amount of gratification, or RM10,000, whichever is higher.