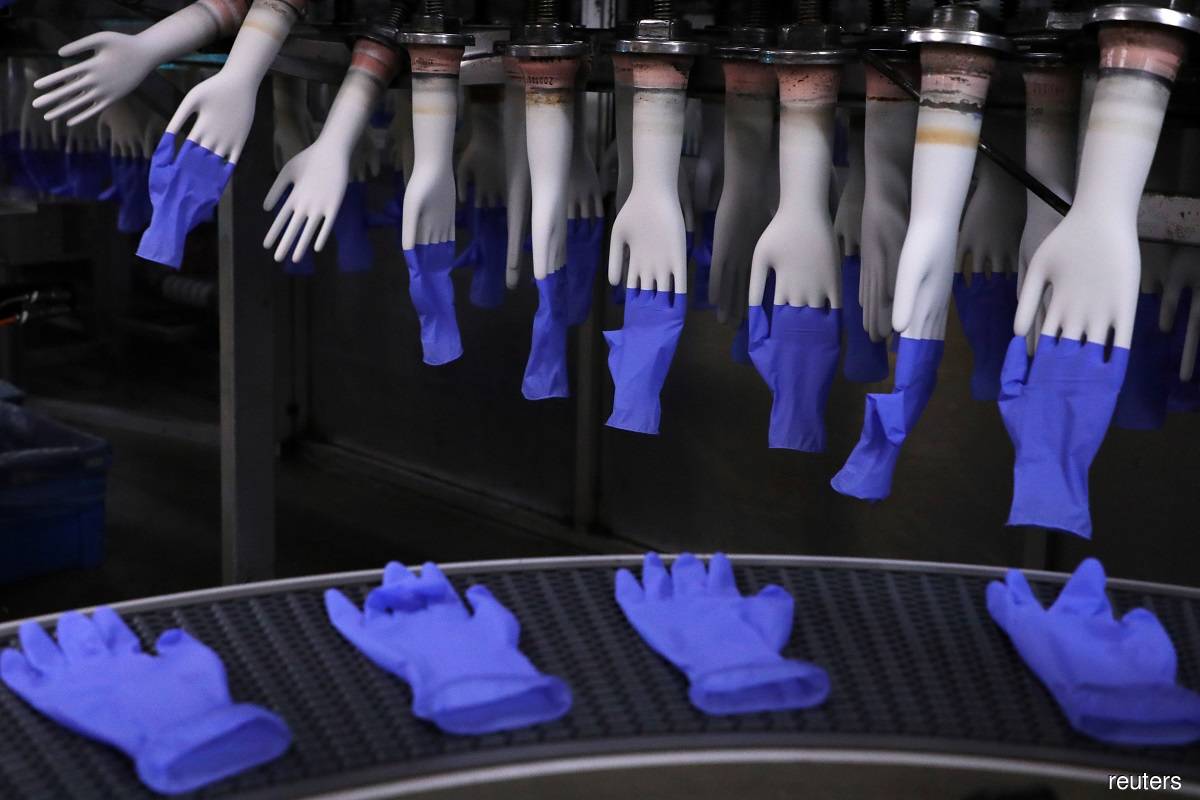 KUALA LUMPUR (June 15): While some analysts are maintaining their "buy" call on glove stocks, fund managers have turned cautious about the sector as a lower average selling price (ASP) is expected to lead to lower profits and valuations.

According to him, there is no longer any acute demand for gloves as vaccination rates in advanced countries have picked up the pace, leading to a drop in the number of active cases. Instead, only a moderate demand is seen for gloves.

"This has a significant impact on the sector as these countries, mainly the US and European countries, are the main revenue contributors of Malaysian glove companies," he told The Edge.

Yong also noted that the forced labour allegations by the US Customs and Border Protection (CBP) against a leading rubber glove manufacturer has served to accelerate the ASP's declining trend. This is because the company has resorted to selling gloves to other countries at a lower price after it was banned from exporting to the US.

Other glove companies have no choice but to follow suit to maintain their competitiveness in the market, he said.

Yong opined that in the future, incumbent manufacturers in the sector will face challenges from emerging Chinese manufacturers with aggressive capacity expansion plans, although Malaysian players are still ahead in the learning curve, particularly in terms of production technology.

"When there is abundant supply in the market, possibly in the near future, competition among glove manufacturers will soon return," he said.

According to Yong, the market generally is valuing glove companies using their two to three years' forward earnings in view of the post-pandemic normalisation of earnings.

"Even though the valuation is not high, the market may not be as interested in this sector as before due to its dimmer outlook now," he said.

"The sector ASP is coming down. Competition has intensified as more players are coming in. This may slash the ASP faster than expected," he told The Edge.

Ang expects glove makers' profits and share prices to normalise to pre-pandemic levels after one to two years.

A fund manager who declined to be named said he too is not positive about the outlook for the glove sector.

"The sector is on a downtrend and there is no immediate catalyst, especially given the worldwide effort in pushing for vaccination," he said when contacted.

The fund manager also referred to Top Glove Corp Bhd's confirmation that the ASP will continue to come down in the future, and said investors will need to price that in to come to a fair valuation.

"The earnings for the sector remain uncertain as it depends on how ASP and production normalise," he told The Edge.

Although the price-earnings for some glove makers are cheap, he said the market is expecting their earnings to come down and as a result their share prices are seen to be volatile.

Some analysts, however, remain positive about glove stocks, due to the potential lift of the CBP ban and attractive valuations.

Hong Leong Investment Bank analyst Gan Huan Wen said in a note last week that despite Top Glove missing his earnings expectation, he is maintaining his "buy" call on Top Glove as he thinks it is only a matter of time before the CBP ban is lifted, which would result in significant sales volume recovery.

"Top Glove guided that ASPs are expected to see a gradual decline, in line with market prices. We are unsurprised by this as Top Glove's ASPs had previously reached levels unmatched by its peers.

"We reckon the likelihood of Top Glove's CBP ban being lifted soon is favourable, as it has achieved green states in all 11 ILO forced labour indicators, as verified by [third party ethical trade consultancy] Impactt," he said.

Meanwhile, as the big four glove makers' share prices have fallen by 8.63% to 32.49% year to date, some analysts see their valuations attractive.

As for Kossan, Ng opined that there was still room for the group to increase its ASP as it was still below the industry leaders.

Thus, he was still expecting to see earnings growth for the company in 2QFY21.

"We believe that the ASP will decline gradually over the course of next year, rather than a sharp decline as some are expecting," he added.

Despite the increase in overall capacity by both new and existing players, Ng was not expecting ASPs to fall below pre-Covid-19 levels, as the current crisis would have helped drive awareness of the importance of personal protective equipment.

According to him, countries like China had also started requiring the usage of medical gloves in healthcare facilities, due to the current outbreak.

Meanwhile, TA Securities analyst Tan Kong Jin said in a note dated May 5 that he maintained his "buy" call on Hartalega Holdings Bhd with an unchanged target price of RM17.12.

"We understand the plant utilisation rate is back to above 90% as the group has resolved its Covid-19 cases. On ASP, management expects it to grow further quarter on quarter in 1QFY22," he said.

He also noted that Hartalega's annual capacity is expected to increase to 63 billion gloves over the next two to three years from around 41.6 billion gloves currently.

Share prices of the big four glove makers rose this morning, but most of them pared their gains at closing as selling pressure emerged. Year to date, the counter has declined 13.27%. Bloomberg data showed that three out of 10 brokers still have "buy", "outperform" and "accumulate" calls on the stock. Year to date, the counter has fallen 19.56%. According to Bloomberg, six out of 10 brokers are recommending "buy" or "outperform" calls for the stock. Year to date, the counter has come off 32.49%. Bloomberg data showed the counter is not short of "buy" calls as eight out of 10 brokers are adopting "buy", "add" and "outperform" calls for the stock. Year to date, the counter has lost 8.63%. According to Bloomberg, six out of 10 brokers are recommending "buy" and "trading buy" for the stock.

Unit trust investing at your fingertips

The race between vaccine rollout and virus mutation