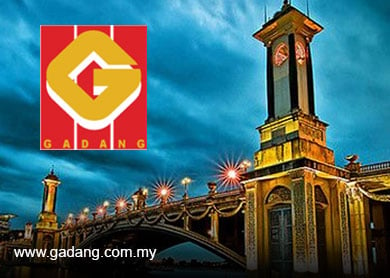 Gadang did not declare any dividend for the quarter.

On property division, the group saw a 15% decrease in pre-tax profit to RM3.71 million, from RM4.35 million on higher marketing costs. However, revenue for the segment grew 7% to RM20.54 million, from RM19.25 million. The group’s current property development is in Kuala Lumpur, Johor and Kedah.

Gadang’s utility division — which include water and hydro power concessions in Indonesia — saw its segment’s pre-tax profit shrink 52% to RM534,000 from RM1.11 million previously, mainly due to disposal of its indirect subsidiary PT Sarana Tirta Rejeki in November last year, as well as weakening Rupiah — which is the division’s functional currency.

The group’s plantation business saw its pre-tax loss narrow to RM537,000 from RM629,000, due to extensive harvesting activities. Its segment revenue tripled to RM281,000, from RM85,000 previously. Gadang ventured into oil palm business in 2009, with plantation landbank of 5,200 acres in Ranau, Sabah.

On its future prospects, Gadang expects the performance for the current financial year to further improve, in tandem with its outstanding construction orderbook of some RM1.3 billion.

“The group’s property division shall continue to perform well with a total pipeline gross development value of RM2 billion, comprising on-going developments in Cyberjaya, Bandar Puncak Sena township in Kedah, the remaining phases of The Vyne, and the Capital City joint development project,” it said in a statement to Bursa Malaysia this evening.

Gadang share price shed 3.25% to RM1.49 today, giving it a market capitalisation of RM320.23 million. The stock has slid from the peak of RM2 in late July.