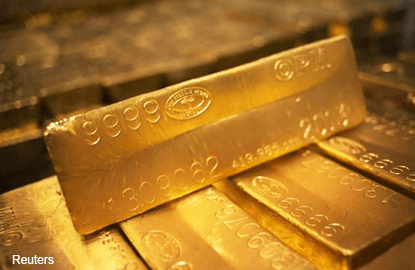 LONDON (March 2): Gold prices fell on Thursday, pressured by a stronger dollar on rising expectations of a US rate hike in March, but losses were muted as investors remained friendly to bullion as a hedge against global uncertainty and rising inflation.

"Gold is showing a bit of resilience against a triple dose of headwinds. We've got the dollar moving higher, yields moving up and a surge in stocks, but we've not seen any major downside reaction so far," said Ole Hansen, head of commodity strategy at Saxo Bank in Copenhagen.

European stocks held near 15-month highs on Thursday and the dollar strengthened against other top global currencies on growing expectations that the US central bank will raise interest rates later this month.

More Fed policy-setters, including Chairwoman Janet Yellen and Vice Chairman Stanley Fischer, will speak on Friday, likely providing further signals on the Fed's policy path ahead of the March 14-15 meeting.

The Dow Jones Industrial Average rose through the 21,000-point mark for the first time on Wednesday while the dollar index, a measure of the greenback against a basket of six other major currencies, hit 102 on Thursday, its highest since Jan 11.

"The market is also keeping an eye on geo-political risks, which are not going away, and we have rising inflation in the US and Europe. We just had European inflation numbers rising to the highest in four years," Hansen added.

US inflation recorded its biggest monthly increase in four years on Wednesday while euro zone inflation surged to 2.0% last month, data showed on Thursday, shooting past the central bank's target.

"If we look at gold's performance over the course of the last five trading sessions, prices have hardly dropped at all, telling us that funds remain committed to the precious metal in light of what they view to be an uncertain US legislative outlook," INTL FCStone analyst Edward Meir said.

"In addition, funds do not want to get too short ahead of the critical French elections."

Holdings of SPDR Gold Trust, the world's largest gold-backed exchange-traded fund, rose 0.28% to 843.54 tonnes on Wednesday from 841.17 tonnes on Tuesday.