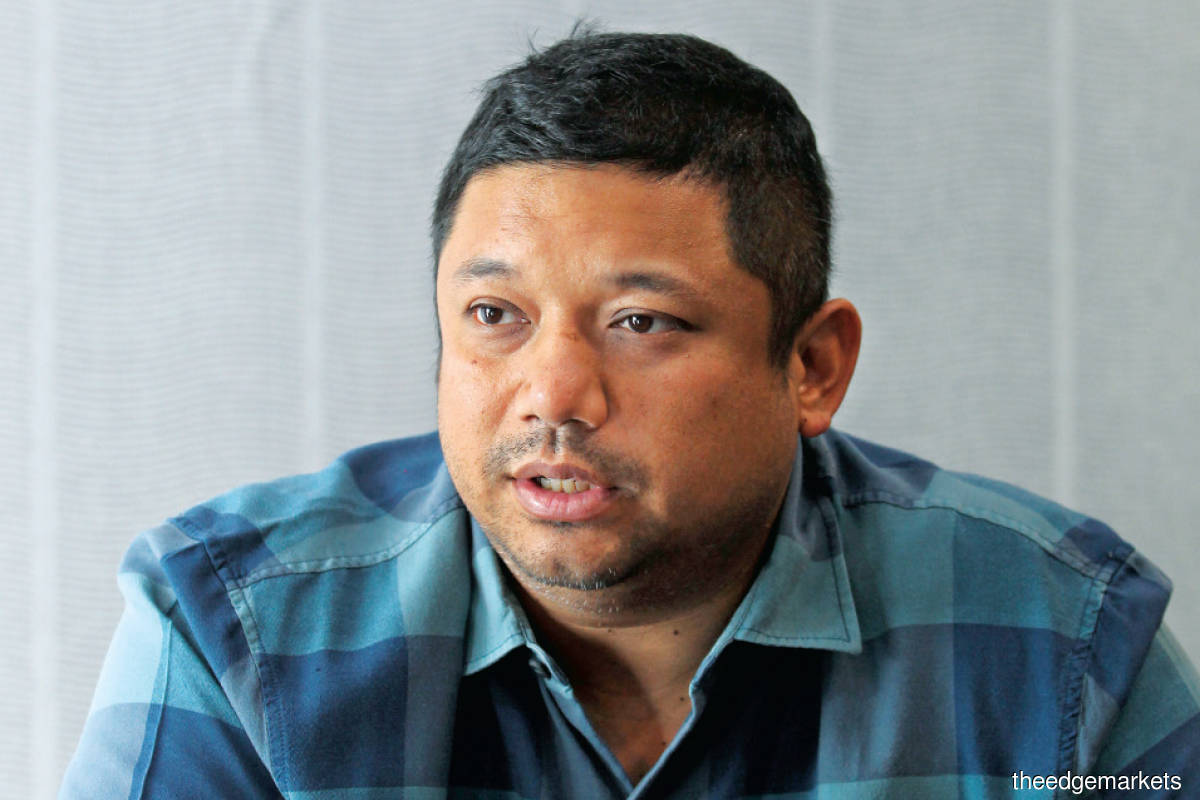 Ruben: We are expecting flat to 5% growth in container volume for 2023 compared with 2022, considering a recession is possible, with the way interest rate hikes and inflation are going. That’s why we have to be cautious. (Photo by Mohd Izwan Mohd Nazam/The Edge)

FOR much of this year, higher fuel expenses and a one-off prosperity tax have put the brakes on the rapid growth that Westports Holdings Bhd enjoyed over the last three years. Numbers for 2022 are likely to be weaker.

Westports posted RM464.54 million in net profit for the first nine months ended Sept 30, 2022 (9MFY2022), down 21% year on year, as the group continued to take a hit from rising fuel prices and the one-off prosperity tax introduced by the federal government in Budget 2022.

The decline was also because of the absence of a RM73 million insurance compensation received in FY2021 for two damaged cranes.

“If you put together these one-off items with the effect of higher fuel price, you’ll see why this year isn’t looking as good as last year,” Westports group managing director Datuk Ruben Emir Gnanalingam tells The Edge in an interview.

Looking at its earnings for 9MFY2022, he adds that the group does not expect to outperform last year’s record net profit of RM808.22 million. Stripping out the RM73 million insurance compensation, net profit was RM751 million — still up 15% from RM654.49 million in FY2020.

Analysts are expecting Westports’ full-year net profit to decline to RM616.9 million in FY2022 before recovering to RM686.3 million in FY2023, according to estimates compiled by Bloomberg.

Ruben says high fuel prices remain a concern for the group as it accounts for 20% to 30% of its operating cost. Fuel has also become expensive due to the combination of a strong US dollar and weak ringgit.

“We purchase diesel at an unsubsidised price. We use diesel fuel for our tugboats, trucks and yard cranes,” he adds.

He notes that the prevailing weak ringgit makes fuel more expensive as the company buys the commodity in US dollars. “When we buy our equipment, some of them are imported and those are purchased in US dollars too. That affects us as well. On the flip side, the weak ringgit has made it more affordable for our customers as we charge in ringgit. If the local currency continues to be weak, we see our exports becoming stronger but it could also weaken our imports because prices of imported goods would be high.”

Disruption of container trade flow along the European Union nations route because of the sanctioning of Russian goods and the lockdowns on many Asian production hubs, including Malaysia and China, had resulted in weaker container volumes at Westports since 2020.

“The supply chain disruptions triggered by the Covid-19 pandemic caused the container yard to be full and overflowing. Boxes were not moving because there were lockdowns globally, including in Malaysia. That’s why we couldn’t handle more business in 2020 and 2021. So, operations-wise, it has not been great since the pandemic,” says Ruben.

The same cannot be said from an earnings perspective. The group enjoyed higher storage revenue and increased profitability despite the softer throughput growth.

The good news is that after two years of port congestion and container shortages, disruptions are now easing, which has freed up capacity in the yard. “From an operations perspective, it is actually better this year because the yard is no longer full. Therefore, we can move freight a lot faster. On the other hand, we have seen some normalisation of the storage revenue as the yard is no longer full,” Ruben says.

Ruben expects Westports to handle lower container throughput this year, but only minimally. “We are expecting flat to 5% growth for 2023 compared with 2022, considering a recession is possible, with the way interest rate hikes and inflation are going. That’s why we have to be cautious,” he says.

He notes that consumer spending in the US and European economies have slowed and if that is prolonged, it could lead to a recession.

“Another thing that is not happening is that, usually, about 30% of China’s population, or 300 million Chinese people, would go overseas to shop and travel. From that perspective, they are not consuming as much overseas as they used to but are now consuming more in China. Once China reopens its borders, I am sure things will go back to normal.”

Westports 2.0 a catalyst to watch

Westports stock is currently down 14% year to date, but the concession agreement for Westports 2.0 could be a catalyst to watch in 2023. Its shares closed at RM3.44 last Wednesday, which translates into a market capitalisation of RM11.73 billion.

According to Ruben, a top priority for the group is to conclude negotiations with the Public-Private Partnership Unit, the Ministry of Transport and other relevant government agencies on the concession terms for Westports 2.0, which was unveiled in August 2017. The group has so far obtained approval from the Port Klang Authority (PKA), which regulates the commercial activities in Port Klang, on broad proposed terms of the new concession agreement.

“Our key focus is trying to conclude our concession agreement for our container expansion project to increase our capacity in the long term,” says Ruben. Westports 2.0 entails the development of eight new terminals, CT10 to CT17, which will double its container handling capacity to 28 million TEUs from 14 million TEUs.

The port operator had initially aimed to conclude and finalise the concession terms for Westports 2.0 by 4Q2021.

“If you look at the last few years, it has not been easy to get things through. For example, we had issues going online during the pandemic,” Ruben says, adding that the outcome of the upcoming 15th general election could also cause delay to the signing, given that the appointment of a new transport minister would mean the ministry would have to adjust to the new workings.

Ruben is unsure when the concession agreement will be concluded, although analysts are predicting the signing will take place by mid-2023.

He adds that the equity fundraising will take place a year after the signing of the concession agreement. The estimated total development cost of Westports 2.0 is reportedly RM12.6 billion, which will take between 25 and 30 years to fully develop.

“That’s why we are not rushing to pursue fundraising. I don’t think we will sign the concession agreement any time before the end of this year. Let’s say we sign it sometime next year, it would be one year thereafter that an equity capital raising is planned. Also, we still have a lot of room in our [existing] debt programme, so there is no rush to raise equity,” he explains.

Currently, Westports holds a concession to operate the port (CT1 to CT9) until August 2054.

Fortunately, the container growth slowdown during the pandemic had provided some respite from the delay in embarking on the Westports 2.0 container expansion project, says Ruben. “Under normal circumstances, I would say, yes, [the delay will affect Westports]. If we were expanding the way we were before 2019, then it would be a lot more complicated. But because we had a slowdown during the pandemic, these delays have not had an impact.”

But Westports is not resting on its laurels. In 2018, the group had acquired 154.2ha of leasehold land under the sea in Pulau Indah, Selangor, from the Selangor State Development Corp for RM116.2 million. Then, in 2020, Westports announced the acquisition of a 146.4ha leasehold parcel in Klang from its major shareholder Pembinaan Redzai Sdn Bhd for RM393.36 million. Both parcels are earmarked for the Westports 2.0 expansion project.

This year, the group has allocated about RM200 million for capital expenditure to build a new power substation and a new liquid bulk terminal and for replacement and maintenance of equipment.

“Another top priority is to move to greater adoption of automation and digital technology, [and] at the same time become more sustainable. We have set up a digital sandbox in the port where we encourage companies to come and explore with us on new technologies. The whole idea is to try and see which ones work and do well and give us the highest returns, and implement those. While we are [using] technology ahead of a lot of ports, we want to make sure that we continue to do so,” says Ruben.

Ruben says the 50:50 joint venture (JV) between Westports and MMC Corp Bhd is negotiating with PKA to approve the strategic business plan involving the expansion of the 69.8-acre cruise facilities.

“The idea is to handle and bring in more international cruise ships to Port Klang. I am talking to all partners that are looking at Southeast Asia as their cruise destination.

“The potential funding should be internally generated or PKCT would borrow directly, rather than the two shareholders injecting more capital. But we need to have a finalised plan first and we need to have it all agreed upon with the port authority, and then bring in the architects and engineers. So, I don’t think it’s going to start anytime soon, but the plan is to expand the facilities there,” he adds.

The Penang Port Commission is also looking to transform Swettenham Pier Cruise Terminal (SPCT) into a leading cruise ship terminal in Malaysia and a major port in the region.

Ruben sees PKCT and SPCT as complementary to each other. “You need more destinations to have more calls and more capacity so that more ships can come. If it is Port Klang alone, I don’t think it would be interesting. But if you have Penang, Langkawi, Phuket, Singapore and the rest of Southeast Asia to offer, then you can create more cruise packages around it. Otherwise, it gets too boring,” he says.

Ruben also says that, following the acquisition of its 50% stake in PKCT from Boustead Holdings Bhd for RM115 million in September last year, Westports has no potential acquisition target.

“We are constantly looking for potential acquisitions, but it must be of value to us. We are not looking to plant any flags at any point in time. For us, if we invest in something, it has to be because it gives us good returns.

“I have not seen anything on the horizon from that perspective yet. [The acquisition of the Port Klang] cruise terminal was mainly because it was in Port Klang, but the focus would be on container ports. The key question is whether the investment would give us good returns,” he says.

Still, preference would be for acquisitions in Southeast Asia as the region is “easy to manage”. “We have been invited to invest in South America and Central America, but I don’t think we can manage them. We have turned down the offers because they just didn’t make sense for us. [An acquisition] closer to home makes more sense,” says Ruben.