Management
From The Edge 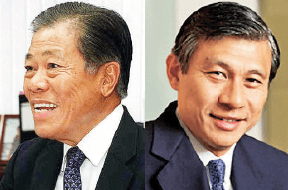 THE Raffles Hotel in Singapore styles itself as the city’s most graceful landmark, a 115-year-old colonial edifice that draws thousands of guests and visitors each year.

Since being repainted in 2014, its bright white facade has become even more of a beacon. The touch-up required about 2,500 litres of Vinilex 5000 acrylic emulsion, according to paintmaker Nippon Paint.

That’s a fraction of the one billion litres of paints and coatings produced annually by Nippon Paint South-East Asia Group or Nipsea, whose success has made founder Goh Cheng Liang Singapore’s richest person with an US$8.2 billion (RM29.27 billion) fortune, according to the Bloomberg Billionaires Index.

Goh and Osaka-based Nippon Paint Holdings Co jointly own closely-held Nipsea. In the past year, the duo cemented their half-century-old partnership after the billionaire boosted his stake in Nippon Paint to 39%, making him the largest shareholder in Asia’s biggest paintmaker.

“If you mention the Goh name in the painting industry, it isn’t known,” Rajesh Palaha, an independent marine paint consultant based in New Delhi, said in a telephone interview. “Nippon Paint is known.”

Goh set up his first paint shop in 1955 in Singapore, when the city was a British colony. He became a distributor for Nippon Paint and the Japanese company established a paint manufacturing plant in the city-state in 1962.

“Nipsea has been selling paint from 1962 in Asia,” said Krithika Tyagarajan, a Singapore-based senior director at consultants Frost & Sullivan. “Over the last 50 years, it has really grown into a major Asian player.”

Goh’s wealth puts him ahead of Wee Cho Yaw, the largest shareholder of Singapore’s United Overseas Bank Ltd and the city’s second richest with a US$6.9 billion fortune. Tan Kim Choo, the widow of late property tycoon Ng Teng Fong, follows with a US$4.9 billion fortune. Her sons Philip and Robert Ng, have fortunes of US$4.6 billion and US$4.5 billion respectively.

While Nipsea’s paints are sold in stores across Asia and adorn some of the region’s most prominent landmarks, the 87- year-old keeps a low profile. His son Goh Hup Jin, 61, has headed the company since the 1980s and is similarly discrete.

The scale of Goh’s fortune came into the spotlight when his son began exploring a takeover of Nippon Paint in 2012. After the talks stalled, Wuthelam switched tack and the two companies instead announced a deepening of their strategic alliance in February 2014.

Nippon Paint raised its stake in eight joint ventures it runs with Wuthelam to 51%, while the Singapore company received 60 million Nippon shares. That helped the Gohs to increase their stake in the Japanese paintmaker to 39% from 15% by December 2014, according to stock exchange filings.

The consolidation of Nipsea units made the Japanese company Asia’s biggest paintmaker and estimated to be the fourth-largest globally, according to Akihiro Kishi, a Tokyo-based analyst at IHS Chemicals, which researches the paint industry.

“The alliance will accelerate their investment to Asian countries, where the paint market is expected to grow considerably,” Kishi said by email.

The Nippon Paint stake was valued at US$4 billion as of Jan 16. Wuthelam’s minority holdings in Nipsea are valued at US$4.1 billion, based on the average enterprise value-to-sales, enterprise value-to-earnings before interest and tax, and price-to-earnings multiples of Nippon Paint, based on financial information disclosed in a May 2014 company presentation.

Singapore proved to be a lucrative market for Goh’s paint venture, as government rules require buildings to be repainted every five years. The joint venture flourished and expanded into the rest of the region, including China, the Philippines, Malaysia and Indonesia.

Nipsea’s access to high-growth markets underscores the joint venture’s importance to Nippon Paint. While revenue from the Japanese market increased 7.4% in the year ended March 2014, sales by Nipsea affiliates surged 48%, according to company data.

Such growth has ensured Goh’s place among the region’s richest people and funded the Goh Foundation, which gave S$50 million (RM134 million) to Singapore’s National Cancer Centre in March 2014 and underwrites scholarships to several Singaporean universities.

Goh also has a passion for luxury boats. His collection includes the 61m (200-foot) superyacht White Rabbit Echo, according to a Wuthelam company newsletter.

The family’s otherwise low profile contrasts with the reach of the family’s business empire, whose expansion has been powered by a focus on decorative paints and Nipsea’s ability to tailor products to different markets, according to Frost & Sullivan’s Tyagarajan.

“Compared to the banking industry or the telecommunications industry, the paint industry isn’t seen as glamorous,” Tyagarajan said. “But even with strong competition, Nipsea has done very well for itself.” — Bloomberg

This article first appeared in The Edge Financial Daily, on January 20, 2015.