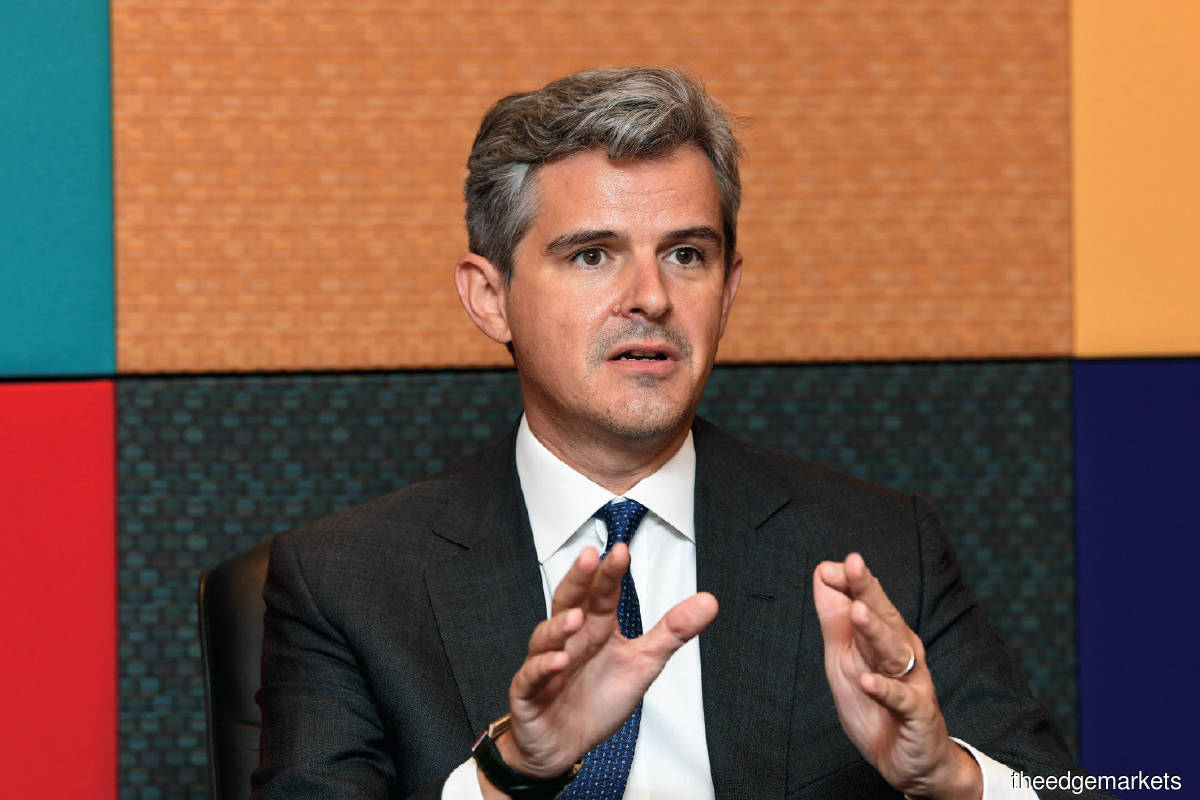 Gori: One thing we know for certain, there is going to be a lot of volatility going forward (Photo by Patrick Goh/The Edge)

The US-headquartered global bank has a presence in 16 markets across the region.

According to Gori, JPMorgan’s strength in the region is in serving inbound and outbound businesses — that is, global clients coming into Asia and, conversely, Asian clients expanding beyond Asia.

“Our strategy in itself is relatively simple … we try to follow what the clients are doing. In that sense, the inbound and outbound businesses will change potentially a little, given the environment. But, where you’re going to have some challenges, you are also going to have some opportunities,” Gori, who is based in Hong Kong, tells The Edge in an interview in Kuala Lumpur last week.

“One of the challenges could be, in a rising interest rate scenario, will emerging Asia still be attractive from a global investor standpoint? On the other hand, the geopolitical environment is probably reshaping supply chains from a regional standpoint; there could be opportunities where clients, who had manufacturing [businesses] in certain countries, would move to others and they would need our services in payments, balance sheets, accounts opening and so on. So, that’s what we try to do,” he says.

He points out that the bank’s payments, securities services and custody businesses tend to benefit from a rising interest rate environment given that they are fee-based businesses.

The bank’s markets business also benefits from high trading volumes amid the volatility.

“Those are businesses in which we have been investing and expanding a lot,” he shares.

Gori, who is also JPMorgan’s head of banking in APAC, is optimistic of the region’s long-term growth prospects.

“Just to be clear, we want to grow further in Asia and with Asia. Asia is growing as a region. By the end of 2030, we estimate that probably 50% of the global GDP will be produced in this part of the world. So, for us, strategically as a firm, Asia is the fastest-growing region [in the world] and will remain so for the foreseeable future, and we want to keep investing [here],” he says.

JPMorgan has “absolutely no” plans to reduce headcount in the region; on the contrary, it continues to grow headcount at a “healthy” rate based on business needs, he says, without revealing specific numbers for competitive reasons. “I think it’s a time for talent acquisition.”

To put things into perspective, APAC is the third-largest revenue contributor to the JPMorgan group, after the US and Europe.

And, within APAC, North Asia — comprising Greater China, Japan and South Korea — is the largest contributor to the region’s revenues.

The banking group has a long history in Asia. Last year marked its 100th year in China, where it first set up a branch.  In Malaysia, JPMorgan has been operating as a full-fledged commercial bank since 1964, serving large Malaysian corporates, financial institutions, foreign corporates and the public sector.

After its June 15 meeting last week, the US Federal Reserve raised the key interest rate by 75 basis points (bps) to a target range of 1.5%-1.75% to quell surging inflation.

The move — the largest increase since 1994 — was widely anticipated by the market, including JPMorgan economists. The bank has forecast a year-end funds rate of 3.125%.

At a financial conference in the US earlier this month, JPMorgan chairman and CEO Jamie Dimon warned of an “economic hurricane” coming.

“[Dimon’s] view was, there are a variety of things happening at the same time. The American economy is still doing exceptionally well and as it has a large amount of the monetary stimulus that has not been spent yet, you could see a trend whereby the American consumer will keep on spending for now, which would put further pressure on inflation.

“At the same time, you have the quantitative tightening where all the major central banks of the world are removing liquidity at the same time. So, you could see [a scenario] whereby the forces could collide with each other with unclear outcomes,” Gori explains.

Asked about investment banking prospects in the region amid these uncertainties, Gori notes that equity capital markets (ECM) activity in particular has been slow.

“ECM activity has been slow as a consequence of everything that is happening. And, to a certain extent, there probably hasn’t been a repricing on the issuer’s side of their expectation, in an environment where rates are [going to be] higher than before. Both issuers and the investors have to accept that the world is different from what we have known it to be in the past 10 years or so, and therefore they need to be prepared for a new way of looking at investment,” he says.

“As for M&A (mergers and acquisitions), it is still quite active, although my view is they are closing deals that were announced last year. The new announced deals are slowing down a little [as] people are taking a wait-and-see [attitude] … they are a bit concerned about financing costs [that] are increasing.

“[Meanwhile], debt capital markets activity is active in some parts, but slower in other parts, but I think that’s going to come back,” he says.

No plan for Asia digital bank

Gori says there are no immediate plans to set up or invest in a digital bank in Asia.

“APAC has some of the most digitally advanced banking businesses in the world. So, there could be opportunities for the region, but perhaps not imminent,” he says.

Last year, the group launched a digital-only consumer bank called “Chase” in the UK, marking its first foray into retail banking outside of North America. The goal was to pilot a digital banking model that could potentially be scaled to other countries.

JPMorgan also has a 40% stake in a digital bank in Brazil, C6 Bank, which it acquired last June.

“We never had retail [banking] operations outside of the US … until last year. Technology has given us the opportunity to do a digital bank experiment and see whether this is a sustainable business model. We’ll see how those two (Chase and C6) go and then decide what to do,” he says.