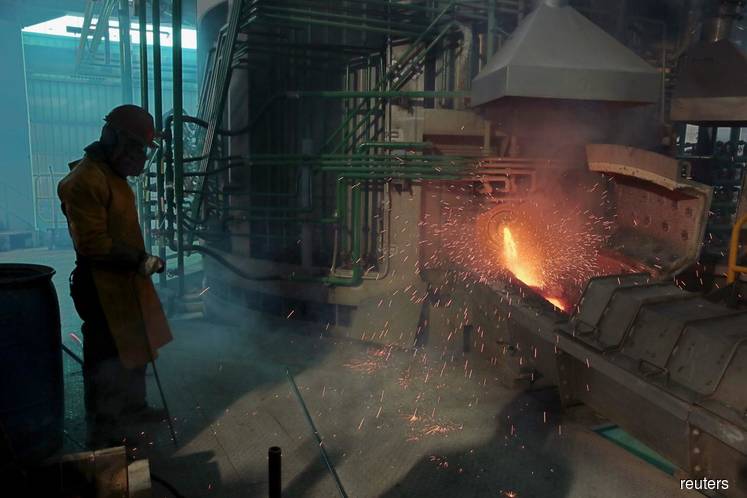 (The opinions expressed here are those of the author, a columnist for Reuters.)

LONDON (May 22): Tightness has returned to the London Metal Exchange (LME) tin contract.

Stocks are low and falling. Time-spreads have moved back to backwardation.

This is, to some extent, business as usual for the London tin market, a low-liquidity contract where brokers sometimes struggle to match lending and borrowing flows.

But it's still a surprising outcome given a macro backdrop of sliding manufacturing activity around the world as Covid-19 takes its toll on economic, as well as human health.

Tin's contrarian behaviour is down to the severity of the supply-chain hit caused by the coronavirus, as lockdowns forced the suspension of some of the world's largest producers.

The resulting supply gaps have led to a run on exchange stocks, both in London and in Shanghai.

However, key mines and smelters are now gradually coming back into production, putting the spotlight back on the state of demand.

London tin may be tight but the current outright price doesn't suggest the physical squeeze is going to persist.

The benchmark LME tin time-spread, a rolling cash-to-three-month period, flared out to a backwardation of US$245 per tonne on Wednesday.

It was the largest premium for cash metal since May last year when the tin backwardation spiked to US$340.

Indeed, tin was in contango over most of the first three months of 2020, mirroring the spread structure in the other base metals.

Most of them remain that way, which is not surprising, given the industrial metals market is worried about collapsing demand and building inventories.

However, LME tin inventories haven't been building at all. Rather, they have slid from just over 7,000 tonnes at the start of the year to 3,330 tonnes.

Almost half of that metal is "cancelled tonnage" — material earmarked for physical load-out — reducing the liquidity pool for physical settlement to just 1,735 tonnes.

There are a couple of entities showing up in the LME's dominant positions report but with cash holdings of 30-40% of available stock, neither is exactly huge in tonnage terms.

Such liquidity stress is not unusual for the tiny tin market. During the worst of the squeeze last May there were 10 dominant players trying to manage their positions with less than 700 tonnes of available stock.

But it is unusual in the current context of the demand shock spreading around the world in the wake of the coronavirus.

What differentiates tin from the other LME metals is the scale of the supply shock that has been running parallel with the Covid-19 demand hit.

In recent weeks producers in Malaysia, Peru, Bolivia and Brazil have been forced to suspend activities under national quarantine measures.

Indonesia, the world's largest exporter, has simultaneously reined in exports in reaction to a collapse in the tin price from a January high of US$17,900 per tonne, to a March low of US$12,700.

Outside of China four of the world's five largest producers have reduced output or, in the case of Indonesia's PT Timah, sales.

Chinese smelters meanwhile, have struggled to maintain production due both to lockdowns and problems sourcing raw materials.

The country's national production of refined tin fell 10.7% in April from March, according to Antaike, the research arm of the China Nonferrous Metals Industry Association.

One smelter has suspended production and others are struggling to ramp up, following lockdowns due to a squeeze on mined concentrates, the state research house said.

It's noticeable that China, the world's largest producer and user of tin, has been tapping the international market for metal this year.

Shanghai prices have outperformed London, opening an arbitrage gap through which almost 3,000 tonnes of refined tin flowed into China in the first quarter of 2020.

The turnaround in trade flows suggests continuing supply-chain stress in the country.

So too does the fact that stocks registered with the Shanghai Futures Exchange have also been falling. They currently stand at 3,368 tonnes, down 37% on the start of January and the lowest level of inventory since April 2017.

Most of the affected producers now seem to be returning slowly to normality, with Fastmarkets at the start of the month reporting that Malaysia Smelting Corp was already back to 80% of normal activity and research house Roskill picking up on the re-opening of Brazil's Mineracao Taboca.

Whether that feeds through to a rebuild of LME stocks is a moot point. Holders of off-market inventory will only deliver if they absolutely must, fearing any metal they place on LME warrant will quickly disappear in the collective clearing pool.

LME spreads can remain stressed for long periods of time, almost irrespective of what's available in the wider market.

The outright price however can't ignore fundamentals, and at a current US$15,300 the bounce-back from the March lows has run out of momentum.

Weighing heavy is the scale of the demand hit that is coming.

Almost half of tin usage is in the form of electronic soldering in consumer goods, and it seems unlikely the metal is going to escape the combination of reduced manufacturing activity and plunging consumer confidence.

Semiconductor sales are a useful proxy for tin usage in the electronics sector and after a miserable 2019 revenues started growing again in the first quarter of this year.

Global sales were up 6.9% year-on-year in March, according to the Semiconductor Industry Association.

However, the Association warns that the "full impact of Covid-19 crisis (is) not yet captured in available sales data".

A downturn in tin demand looks set to run in tandem with an easing of the supply shock.

While some analysts are pencilling in a supply deficit this year, the International Tin Association, which keeps a close eye on demand trends, still thinks the market will register a significant 14,000-tonne surplus.

LME tin spreads may reflect the current supply tension, but the outright price may be a truer signal of what lies in store.