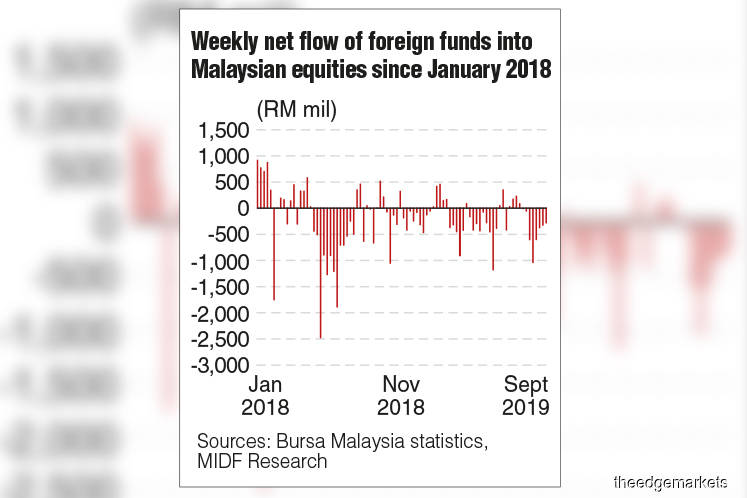 Year-to-date, international funds have taken out RM7.62 billion net worth of local equities from Bursa. This makes up 65% of last year’s total foreign net outflow of RM11.69 billion.

MIDF analyst Adam Mohamed Rahim said the foreign net selling pace, however, has been gradually declining for the past four weeks.

“General sentiment remained cautious after the US increased tariffs on Chinese goods by 15% on Sept 1. Moreover, the risk-off mood was exacerbated by the struggle between Beijing and Washington to set a date to continue trade talks, dragging the local bourse 1.3% lower to close at 1,591 points on the same day.

“It was notable that the heavy foreign net outflow was in conformity with other markets we monitor, namely South Korea, Thailand and Taiwan,” he said.

He noted that the momentum of foreign net selling activity took a breather last Wednesday to go below the RM100 million mark to reach RM78 million.

“The moderation in foreign net outflows was sparked by Hong Kong’s plans to formally withdraw the extradition law and the likelihood of a hard Brexit being avoided.

He added that international funds made a decent return to Bursa last Thursday by snapping up RM2.75 million net of local stocks. Overall sentiment was revived by the news that China said US trade talks would resume in early October.

The foreign net inflow was, however, short-lived as foreign funds disposed of RM80.6 million net last Friday despite strong US job data.

Adam also said in terms of participation, foreign investors experienced the largest weekly drop of 27.2% in the average daily traded value to dip below the RM1 billion mark at RM996 million.

Regionally, he said international funds also continued to leave Asian markets but at a slower momentum.

“Based on the provisional aggregate data for the seven Asian exchanges that we track, investors classified as ‘foreign’ sold US$790.3 million (RM3.3 billion) net last week, marking the lowest foreign net outflow in six weeks.”