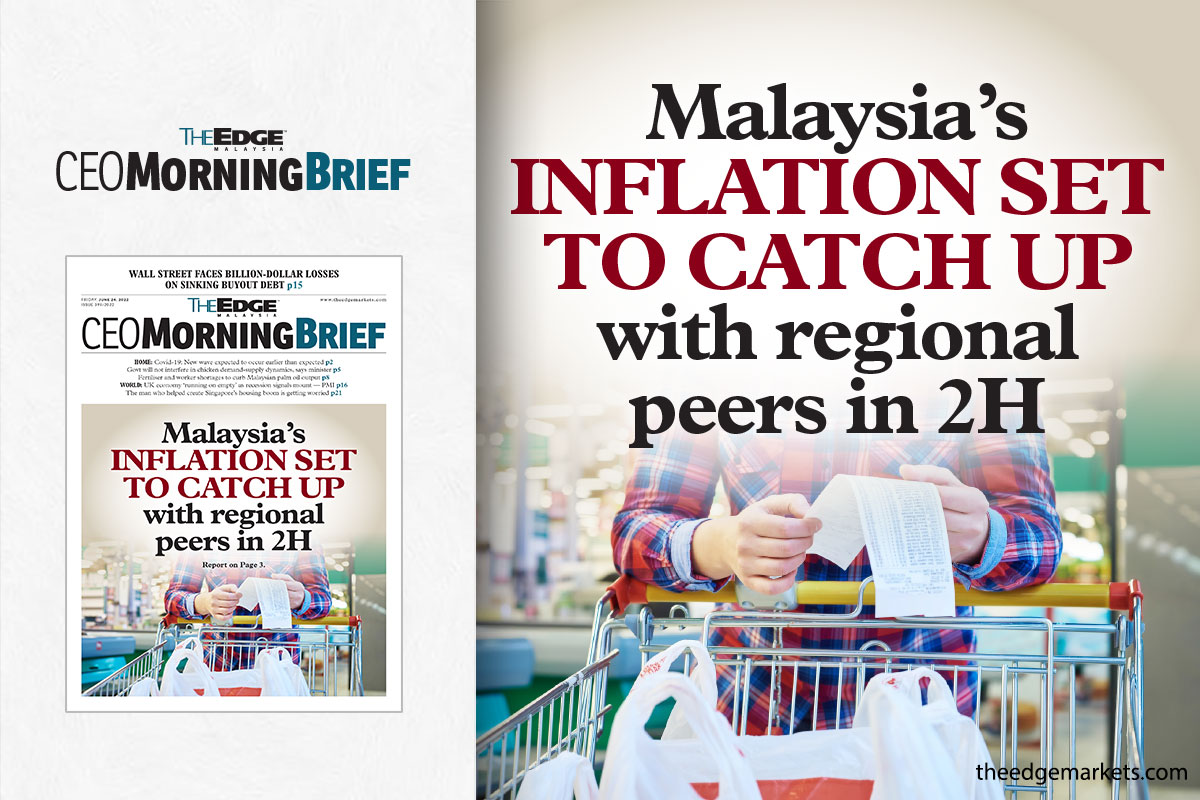 KUALA LUMPUR (June 24): Inflation in Malaysia is poised to catch up with neighbouring countries in the second half of this year, after relatively benign consumer price index (CPI) readings until April, thanks to the blanket fuel subsidy, low utilities prices and the inclusion of price-controlled items in the CPI basket.

Across the Causeway, Singapore’s headline inflation hit 5.6% in May, the highest since November 2011, and up from 5.4% in April.

In Malaysia, food prices are set to rise further after the removal of price caps for chicken and eggs, and the discontinuation of subsidy for bottled cooking oil, said economists.

In addition to food — which has a 29.5% weightage in the CPI basket — the upcoming electricity surcharge review for the July-December period, the planned rationalisation of fuel subsidies and the ringgit’s weakness also post an upside risk to inflation in the second half of 2022, they said.

“We expect CPI to trend higher in coming months as low-base kicks in, coupled with the removal of price ceilings for several key food items and a potential hike in electricity tariff,” UOB senior economist Julia Goh told theedgemarkets.com. “Our current CPI forecast is 3.0% for this year. But this excludes the potential [electricity surcharge] adjustments and subsidies [removal],” she said when contacted. Malaysia’s inflation stood at 2.5% last year, after a deflation of 1.1% in 2020.

CGS-CIMB economists Nazmi Idrus and Lim Yee Ping said unless the government steps in again with a larger subsidy, Malaysia is likely to see another round of price increase if electricity prices are raised in the upcoming  revision. The decision is expected to be announced before the end of this month. “Electricity prices under the Imbalance Cost Pass-Through (ICPT) mechanism are subject for a revision in July, which may lead to a hike, given the elevated prices of electricity inputs, namely gas and coal,” they said in a note.

The duo revised their 2022 CPI forecast upward to 3.1% year-on-year, from 2.5% previously, as the price momentum is likely to remain strong ahead.

If their forecast materialises, this would be the first time Malaysia’s CPI breaches 3.0% since 2017, when inflation stood at 3.8% as domestic fuel and food prices rose during Datuk Seri Najib Razak’s administration, which subsequently lost power in the May 2018 general election. Brent crude rose 18% in 2017 to US$66.87 per barrel, from US$56.82 as at end 2016.

The CPI stood at 2.1% in both 2015 and 2016 despite the implementation of the Goods and Services Tax as global oil prices were on a downtrend, with Brent crude falling to as low as US$28.55 in January 2016, before recovering to end the year at US$56.82 per barrel.

It is worth noting that over the past two decades, the highest CPI growth Malaysia recorded was 5.4% in 2008, after then prime minister Tun Abdullah Ahmad Badawi announced a restructuring of the fuel subsidy amid surging global crude oil prices. This saw a substantial jump in the RON 95 price to RM2.70 per litre. Abdullah stepped down in the following year and was succeeded by Najib.

The CGS-CIMB analysts said the recent announcement of an additional RM630 million in cash handouts to the B40 group after the removal of ceiling prices for chicken and eggs, indicated that the government is willing to allow for the rise in prices of goods, as long as the vulnerable groups are taken care of.

“For 2023, we expect CPI to grow by 3.2% year-on-year, assuming some adjustments to fuel prices for the high-income groups,” they said.

The housing, water, electricity, gas & other fuels category has a 23.8% weightage in the CPI basket, the second highest after food & non-alcoholic beverages, followed by the transport group, which has a 14.6% weightage in the basket.

“The rising cost of the government’s subsidy bill and supply distortions due to the price controls are pushing the government to re-evaluate the subsidy mechanism,” said BIMB Securities chief economist Imran Nurginias Ibrahim when contacted.

“Introducing subsidy rationalisation at a time when prices are skyrocketing could only lead to more problems for the economy and general public,” he said when contacted.

“We are looking at high inflation in the second half of the year,; everything is going up. At the moment, we are looking at 2.5% [for 2022 CPI]. Given the recent announcements (on the removal of price ceilings for chicken and egg and subsidy for bottled cooking oil), we are going to revise it but definitely, it is going to be higher than 2.5% for the whole year,” he added.

Malaysia is due to release May inflation data on Friday (June 24), and consensus estimate points to a 2.7% year-on-year growth, according to Bloomberg data, up from 2.3% in April. The CPI for the first four months of this year grew 2.2% on-year.

If the projected growth in the May CPI materialises, inflation in the country would be at the highest level since the 3.2% reported for December 2021, which was driven by a low-base effect as the country recorded a deflation of 1.4% in December 2020.