Millennials: Tackling the youth market with comedy and memes 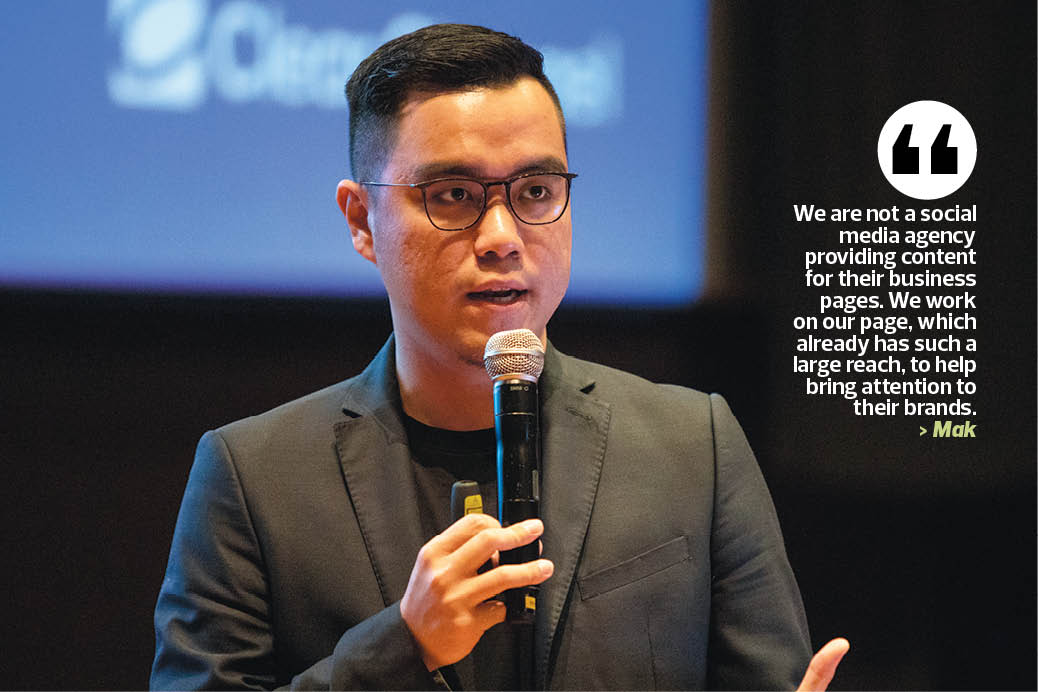 In 2012, university students Karl Mak and ­Adrian Ang decided to produce humorous memes and put them up on Facebook. At the time, there were already several successful meme pages on the social networking site, but most of them were for a Western audience.

Realising this gap, Mak and Ang started SGAG to offer hyper-localised content for the Singaporean audience. Their memes caught on quickly, initially among their friends.

At the time, the duo did not have great plans for their Facebook page. The idea was just to share funny pictures and short videos. They frequently generated new content, but SGAG remained a humorous meme page.

As aspiring entrepreneurs, Mak and Ang tried their hand at running a few start-ups after graduating from university, but nothing really panned out. However, their SGAG page was becoming popular, organically reaching more than a million Singaporeans every week.

“Looking at the numbers, we were quite shocked. After deliberating, we decided to see what we could do to monetise SGAG. In 2015, we established Hepmil Media Group (HMG) to focus on monetising the page,” says Mak.

The strength of SGAG lies in the core demographic of its audience, most of whom are Singaporean youth, he points out. For many large corporate brands, this generation has been hard to tap because they consume media differently from previous generations. HMG helps these businesses connect with this generation. “We were truly fortunate that a couple of brands saw the potential of our page. They contacted us and asked whether we could create some content for them to raise their brand awareness,” says Mak.

“Although this is quite common nowadays, it was unheard of back then for big brands to contact social media content producers for such marketing exercises. We asked them, ‘Really, you would pay us for this?’

“One of the earliest brands that contacted us was Scoot. The head of marketing told us it was willing to take a chance on us. So, we provided the company with creative input, including a cheeky meme that would highlight the broad strokes of what it was trying to do. When the meme was published, it instantly went viral.”

The campaign, which showed the two social media pages — SGAG and Scoot — squabbling with each other, was so successful that it won multiple awards. “The next morning, we received so many congratulatory messages. We did not even know what was going on. Suddenly, every other brand wanted to have a conversation with us, giving us the opportunity to build a business model around branded content,” says Mak.

“But we were very clear about how we wanted to operate. We are not a social media agency providing content for their business pages. We work on our page, which already has such a large reach, to help bring attention to their brands.”

Expanding its reach and diversifying the business

Having proved that its business model was successful, the team started thinking about a Malaysian version. So, the MGAG page was born out of pure curiosity, an experiment to see whether HMG could replicate its success. It turned out that the company could.

“We managed to gain 100,000 followers in just three months. Today, it is more than 800,000. The traction has been amazing. In fact, I think a lot of Malaysians who previously consumed SGAG’s content were eager and excited to see the launch of MGAG,” says Mak.

“I think we have been able to grow because our content resonates with many of the young people in these two countries. Our content is not aggressive — we do not talk about controversial topics such as politics. Instead, we focus more on celebrating our cultural differences and creating content that everyone can laugh at.”

The first few brands that worked with HMG were what Mak describes as “fun” brands such as Scoot, Hasbro, RWS Theme Park and Ben & Jerry’s. After a while, the company decided to explore opportunities for more “serious” companies as well as small and medium enterprises (SMEs).

“Although we do get a lot of interest from these companies, it is quite difficult to reach for a deal. Smaller SMEs, for example, tend to want a barter trade, where they send us their products in exchange for the content we produce, which is something we are not very keen on,” says Mak.

“We are also not able to meet their expectations of instant ROI (return on investment). So, we shifted our attention to much larger and more serious brands.”

With the bigger brands, a different problem emerged. While the companies did have a lot of money to spend, they were not convinced that being associated with a meme page would be beneficial to their business.

“We spent a lot of time selling them on this vision that they would lose a massive opportunity to connect with the youth if they did not include newer platforms such as ours in their digital marketing budget. Back then, they were still throwing money at things like digital banners,” says Mak.

“Ad blockers were already popular at the time, so the companies were not seeing results — they were getting blocked everywhere. There was also no reason for the audience to engage with the ad, even if they saw it.”

Eventually, HMG managed to convince the larger companies to try its services. What these players like the most is being able to track the traffic and engagement rate in real time — something they had never been able to do, says Mak.

“When the other big brands saw this, they were intrigued and wanted to try it out. That was essentially how we managed to capture that market as well, which provided us with great growth momentum,” he adds.

HMG has been profitable from day one, says Mak. As it is not a big tech company, it does not need to burn through a lot of money for its operations. It has also adopted a wait-and-see approach, focusing on generating revenue instead of boosting its valuations through constant fundraising exercises.

“Our goal has always been to become a brand that resonates with millions of young people in the region. That is why we launched MGAG and, more recently, PGAG [for the Filipino audience],” says Mak.

“But we have diversified our offerings to look at other ways to generate income. For example, by selling physical merchandise.”

Through its official Shopee e-store, the company sold The Singaporean Dream card game in November 2018. The combination of good timing (right before Christmas) as well as smart use of localised humour saw the card game sell like hotcakes, enough to convince the team to introduce The Malaysian Dream card game.

“We also launched Off Track, another card game that pokes fun at train disruptions in Singapore. Seeing how successful these offerings were, we are looking to replicate it for our PGAG audience as well,” says Cassi Yang, agency lead at HMG.

While HMG was thriving in terms of the content it was churning out each day, there was a clash among members of the management team on the direction of the business. Mak says the company lost a few senior creative personnel, who went on to create their own content. This was largely due to HMG’s inability or reluctance to shift its attention to other types of content such as fashion and beauty.

“We took a step back and looked at the wider spectrum of content creators in the region and saw this huge rise in individual content creators who were getting brand deals on Facebook, YouTube, Instagram and the latest social media craze, TikTok. It was fascinating,” he says.

“When I was growing up, everyone wanted to be a doctor, lawyer or banker. If you ask children nowadays, many of them want to be content creators on social media. They will tell you, I want to be a YouTuber.”

Mak thinks that a huge shift is bound to happen. Gone will be the days when only a few media conglomerates create the content to be consumed in the region. Instead, individual content creators will take a larger share of the market over the next five to 10 years.

In an effort to be part of the movement, HMG launched Hepmil Creators’ Network (HCN), which aims to provide business opportunities to independent comedy content creators in the region. Yang clarifies that HMG is not just an agency brokering deals for content creators. Instead, the network will guide these creators, allowing them to learn how to better monetise their craft.

“We see HCN as a one-stop shop for creators in Singapore, Malaysia and the Philippines. Let’s say a brand wants to start a campaign on TikTok with 5 to 10 comedy creators. It can be a tedious process for them to vet through the long list of available creators themselves to ensure that they are brand-safe, so they can come to us,” says Yang.

“Working based on the campaign brief and marketing objectives, we act as a middleman that curates their ideas and chooses the most suitable content creators. The whole idea of HCN is to help connect, grow, groom and mentor content creators so they are able to work better with our clients and agencies.”

Across the three countries, HCN has signed up close to 50 individual creators. The majority of them (80%) create content for TikTok, she says. Most of them are treating content creation as a side hustle — something especially valuable in the current unfavourable economic times.

“A lot of agencies and brands have also started shifting their budgets towards online content. We have been getting five times more inquiries since people have been stuck indoors,” says Yang.

“Companies are starting to realise that there is no point pouring their budgets into things like billboards. No one is going to see them.”