My Say: Three big changes in the risk environment for Asia 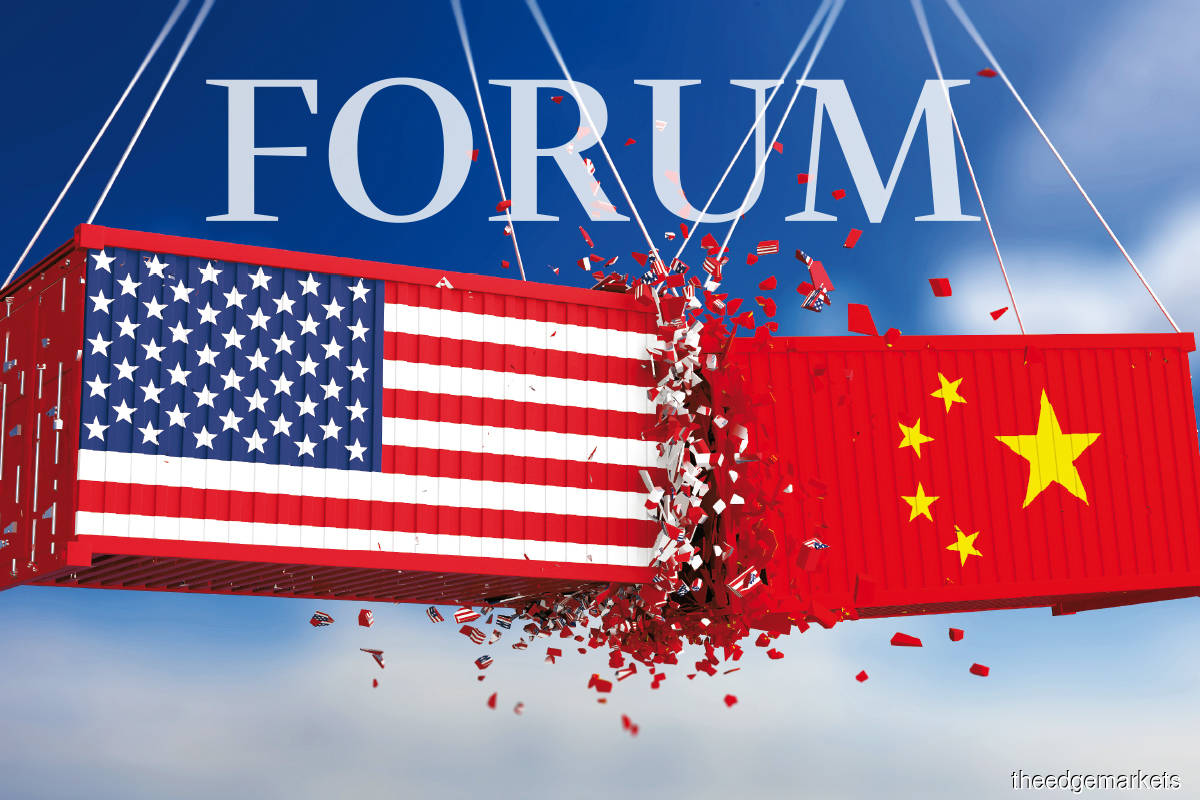 Markets are in a deep funk, rattled by the prospect of inflation surges in the US that will prompt aggressive rate hikes by the US Federal Reserve. The Ukraine war and the worsening tensions between the US and China have added to the confusion among investors. And the ups and downs of lockdowns and Covid infections in China, the world’s second-largest economy, added to the sense that nothing was going right.

This market behaviour and the associated shakiness in the global economy are the product of three major shifts — in how financial assets are priced, in the way big power tussles affect the world and in how China’s economy operates and impacts the rest of us. Understanding all these changes is necessary to appreciate fully what it all means for us in Asia.

In the 15 years since the global financial crisis first began to shake markets, in August 2007, the global economy has become used to historically low interest rates and massive liquidity being created by the world’s central banks. More than that, the major central banks of the world (except China’s) kept monetary conditions ultra-loose even when their economies had recovered from the global financial crisis. Not surprisingly then, investors began to believe that no matter what went wrong, the central bank would always step in to support markets and prevent crashes. Market participants adjusted their behaviour accordingly, feeling free to chase risky assets at valuations they would never have contemplated before. They felt free to shovel vast sums of money into assets with uncertain value such as start-ups or cryptocurrencies.

Separately, policymakers came to believe that no matter how much money they injected into the economy, there would be no inflationary price to pay. The policy of quantitative easing massively expanded central bank balance sheets. For example, total assets of the Federal Reserve rose a breath-taking 10fold from US$880 billion in January 2008 to US$8.9 trillion (RM39.1 trillion). The balance sheets of the European Central Bank and the Bank of Japan experienced similar expansions. Yet, until very recently, there was no inflationary price to pay.

Now, the monetary game has been transformed: it seems to be reverting to previous practice. Interest rates will rise at both the short end as well as the long end and it is unlikely that we will see a long period of such ultra-low rates for a long time to come. Central bankers now see that overly loose monetary conditions could indeed produce inflation and cause havoc with the lives of ordinary folks and how companies operate.

As rates rise, prices of risky assets will fall and careless pricing of assets will be heavily penalised. The bloodletting in financial markets of the past week is just the beginning, barring the odd relief rally from time to time. The next few months will undoubtedly be volatile and many investors will lose fortunes. But once the dust settles, we will be in a new financial regime — with interest rates returning close to the levels that prevailed before the ultra-loose monetary policies kicked in. Eventually, banks and higher-quality bonds will begin to pay depositors and investors a decent return, which means fewer people will have to jump into risky assets to secure a meaningful return. Valuations of equities and high-yield bonds will adjust down and real estate prices may follow suit, except where there are real shortages of homes.

The chances of a military clash are still low but the growing tensions between the US and China will still drive big changes in the workings of the world economy. This is unlike the Cold War between the US and Russia, since their economies operated very much separately from each other. In today’s big power contestation, the American and Chinese economies are highly integrated. They are connected to each other through trade in goods and services; investment in real businesses as well as in financial assets; exchanges of people such as students and tourists; and through flows of ideas, intellectual property and technology. It is now inevitable that the worsening relations between the two giants leads to at least some degree of disengagement in these areas. That will substantially reformat how the world economy works:

•     Even if the US reduces the odd tariff against China from time to time, the basic trend will be one of rising protectionism between the two. This will slow growth in world trade. But, since China’s export-oriented manufacturing relies on supply chains within and outside China, restrictions on Chinese exports will ripple through to hurt intra-Asian trade as well.

•     Reconfiguring of supply chains: Once the Covid crisis fades away, we expect to see a stepped-up pace of production relocation out of China. The argument that China’s ecosystem is so cost-efficient that only a tiny amount of production will shift is not entirely persuasive. Global manufacturers will have to adjust to the rising risk that geopolitical frictions will compromise supply chain reliability or result in political pressures or regulation in their home country. They will have to reduce the proportion of their manufacturing activity conducted in China as a result.

•     Since producing in China is cost-efficient, there will be an economic price to pay for such reconfiguration of supply chains. As producers give up efficiency for political reasons, overall productivity growth will weaken.

•     Increasing tensions will produce a decisive burst in military spending, with a good portion of this being spent on high-tech weapons. Much of this will be at the expense of more productive activity. But in some cases, there might be spillovers as technological progress in defence is found to have productive uses in other areas.

•     Competition between the two nations will also lead to each offering third countries more largesse in aid, foreign investment and funding assistance. Countries such as those in Southeast Asia, which are being wooed by both the big powers, will benefit disproportionately.

Third game changer: A step change in the Chinese economy

We must recognise that the current weakness in China’s economy began well before the recent spate of Covid infections in major economic hubs prompted the government to impose stringent restrictions that hurt economic activity. This deceleration is the product of structural changes in China, which will continue to operate even if the government ever relaxes its zero-Covid strategy. And, looking into the future, there are reasons to believe that the drag on productivity and growth could worsen:

•     Weakening demographics: Official Chinese statistics show that China’s workforce has begun to decline. The latest census made for sombre reading. Birth rates and marriage rates are falling faster than expected. With workers in short supply, economic growth will be curtailed unless productivity growth can speed up.

•     Unfortunately, productivity growth has been disappointing and will not offset this decline in the labour force. What is causing this lacklustre productivity growth is not fully understood. It could be due to misallocation of capital — with resources being poured into construction of homes and infrastructure that are under-utilised. Or, it could reflect the growing role of state firms, which are much less efficient than private firms. Since the causes are not clear, it is difficult to formulate policy responses to rectify the problem.

•     Conscious choice of quality over quantity in economic development: China’s phenomenal growth came at the expense of massive environmental degradation. It also came with rising inequality. Since the mid-2000s, China’s leaders have sought a better trade-off in economic development. They have been willing to sacrifice quantitative growth in order to secure a cleaner environment and a more equitable distribution of income.

•     More recent policy changes have shaken the private sector: There were good reasons for the authorities to crack down on big tech firms but the measures went too far and have undermined confidence and damaged the entrepreneurial verve that drove China’s extraordinary development. It is not just technology companies that exploited their market dominance that have been cut down to size — look at what happened to the education sector, where billions of dollars of value were destroyed after government leaders decided that so much extra tuition was really not good for China. Private companies are being required to have Communist Party cells in their offices, which could have a say in how the company operates. And, just the other day, foreign financial institutions were told that they had to pay their staff in line with what the authorities think is appropriate.

•     Learning from the damaging Western sanctions against Russia, China is likely to focus on being resilient to future economic pressure by the US and its allies. This may mean reducing China’s exposure to trade, for instance, by promoting import substitution in strategic areas. But foregoing the dynamic benefits of trade could hurt productivity and growth.

•     There are also psycho-social trends in Chinese society affecting how some segments of young Chinese work and spend. The “tang ping” or “lying flat” syndrome reflects the feeling of alienated youth who react to the stress of life in highly competitive China by disengaging and leading simple lives.

•     China’s Covid-zero policies may also cause permanent scarring. If the approach is not changed, large numbers of small and medium enterprises that are already struggling could fail. Consumers are also likely to be more wary and tend to save more.

In short, there will be a step-down in Chinese economic growth and the rest of the world will have to get used to that.

Conclusion: Implications for the rest of Asia

These three sets of regime change must have wide-ranging implications for the rest of Asia.

First, the convulsions in financial markets may be severe enough to take down the less-resilient economies. Those that have a record of poor policy, such as Sri Lanka and Pakistan, may be the first to go. But there could be a second set of economies where central bankers may be slow to raise rates and tighten policy in line with what is going on elsewhere. In the longer term though, a more rational financial environment need not be a bad one — certainly for countries that undertake the right policies and build good fundamentals.

Second, geopolitical contestation between the US and China will make life more uncomfortable for the smaller nations caught in between. Protectionism against China can easily be expanded to hurt other exporting nations. Slower growth in world trade will not be helpful either. But the reconfiguration of supply chains may well benefit Southeast Asia and other countries such as Bangladesh.

Third, slower growth in China will affect an important driver of growth. This will be all the more the case if China responds to US pressure by turning inwards and reducing its dependence on imports of components that other Asian nations manufacture.