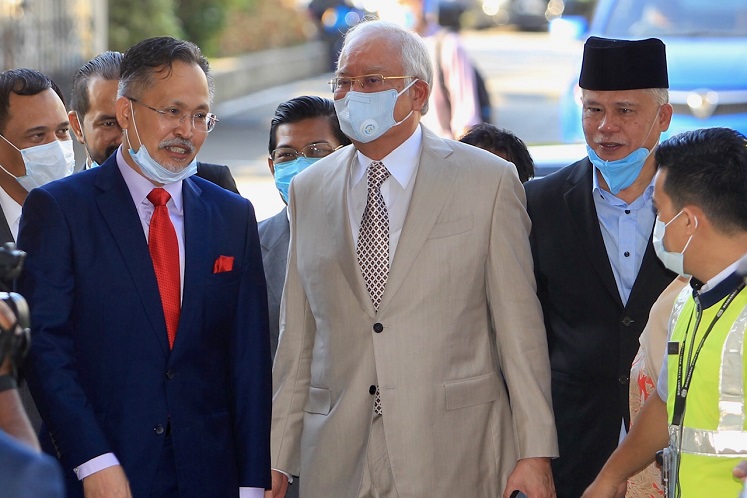 KUALA LUMPUR (June 3): Datuk Seri Najib Razak was aware of the state of his accounts when he issued cheques, the prosecution submitted in the ex-premier’s trial today, pointing to the timing of the funding of his accounts by fugitive businessman Jho Low and the subsequent spending of the money by Najib.

Addressing the defence's assertion that Najib had no knowledge of the going-ons in his AmBank accounts, appointed prosecutor Datuk V Sithambaram told the High Court that the evidence demonstrated otherwise.

He said that based on the BlackBerry Messenger transcripts adduced as evidence, Jho Low had full knowledge of Najib's spending pattern and the amounts that the then prime minister was about to spend.

Sithambaram also made this point in response to the defence's assertion that Jho Low was mostly reactionary in funding the accounts, based on lawyer Harvinderjit Singh’s claim previously that the funds were transferred into Najib's accounts without the former premier's knowledge.

He pointed out that Najib had during cross-examination admitted to being in direct contact with Jho Low on some occasions although most of the time, the businessman would be liaising with Datuk Azlin Alias, Najib's then principal private secretary.

This was a rebuttal to the defence's claim that Jho Low was operating "behind the scenes" and instead showed that he had full knowledge of Najib's spending, the prosecutor said.

"Jho Low was not reactionary in funding the accounts, rather he was a visionary," said Sithambaram.

On one occasion in December 2014, Jho Low had directly messaged AmBank relationship manager Joanna Yu Ging Ping to ensure a credit card purchase by Najib in Hawaii would go through.

Sithambaram also pointed out that Najib returned a portion of the purported Arab donation in 2013, while the balance that he kept, about RM162 million, was already exhausted in June 2013.

The prosecutor questioned how the ex-premier claimed to have had a "sense" of the balance in his account and continued to write cheques and use his credit card, despite knowing that the "donation" money had been used up.

He pointed out the unlikeliness of Najib believing that he had enough balance in his accounts, without being suspicious of the funds present in his accounts.

Sithambaram also said it was impossible for Najib to not have seen his bank statements over a period of five years, given the significant amounts of monies being deposited into his accounts.

This, the prosecutor said, is considered willful blindness as Najib had turned a blind eye to suspicions surrounding the monies, adding that a reasonable person would have made inquiries to allay their suspicions.

The defence will be replying to the prosecution's submissions when proceedings resume tomorrow.