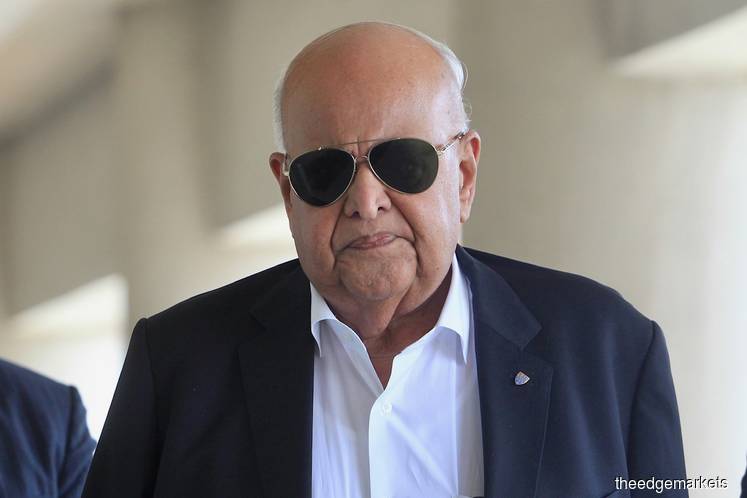 KUALA LUMPUR (June 29): Former premier Datuk Seri Najib Razak and his lawyer Tan Sri Muhammad Shafee Abdullah's judicial review challenge to remove Datuk Seri Gopal Sri Ram (pictured) from leading the prosecution in the 1MDB trial has been postponed to July 13 as they have filed an affidavit by former attorney-general Tan Sri Mohamed Apandi Ali to be used in the case.

Speaking to reporters after closed door proceedings with Justice Datuk Seri Mariana Yahya and senior federal counsel Shamsul Bolhassan at the High Court, Shafee said they are also awaiting Sri Ram’s reply to the affidavit, which is due by next Monday (July 6).

“I informed the court that we will wait for his reply and that it would be ideal that his reply be included,” said Shafee.

Shamsul was of the same view, telling reporters that it would be premature to continue with submissions today without Sri Ram’s reply.

Besides acting as Najib’s counsel, Shafee has also filed for the judicial review as he too is seeking to recuse Sri Ram from his RM9.5 million money laundering trial, which has yet to commence.

In Apandi’s affidavit, the former attorney-general claimed that Sri Ram as senior deputy public prosecutor (DPP) in Najib's 1MDB case, has a "clear mission of bias" against the former premier.

Apandi had recently alleged in a social-media post that Sri Ram had been sent to see him in January 2018 by Tun Dr Mahathir Mohamad to persuade him to arrest Najib, the then prime minister.

In his affidavit, Apandi said he communicated with Sri Ram via WhatsApp after Dr Mahathir-led Pakatan Haparan came to power in May 2018.

He said he asked Sri Ram whether his job as attorney-general was on the line as the latter was advising Dr Mahathir, and in response Sri Ram said he wished Apandi had followed his advice and charged Najib.

“Sri Ram also said in the same message that Najib and his wife are certain 'to face the music'," Apandi said in his affidavit, adding he told Sri Ram he had acted honestly in his role as attorney-general, based on the content of the investigation papers.

"Sri Ram replied to me that the mere fact that monies are in Najib's account by itself was sufficient to charge him. I was surprised by his attitude, which exemplified an unreasonable approach, especially coming from an ex-apex court judge and an eminent criminal defence counsel who had always been preaching the right to a fair trial, especially for an accused person.

"So, I retorted by saying that with regard to the RM2.6 billion case investigated by the Malaysian Anti-Corruption Commission (MACC), there were sufficient explanations by the accused that satisfied the investigation agency. I also said the MACC came out twice with press statements exculpating Najib," he added.

Apandi further claimed that Sri Ram responded by saying that a prosecutor was not concerned with the defence version, as all a prosecutor needed was prima facie evidence of a crime and for the accused to give his explanation in court.

"I have never heard of such a jaundiced view coming out from the mouth of such purportedly an experienced person. I concluded that Sri Ram had a mission of clear bias against Najib in all of his cases," the former attorney-general said in the affirmed document.

He further said he was "horrified" to learn that Sri Ram was appointed a senior DPP under Section 376(3) of the Criminal Procedure Code, which he said was a misnomer as he thinks a DPP must come from the Legal and Judicial Service.