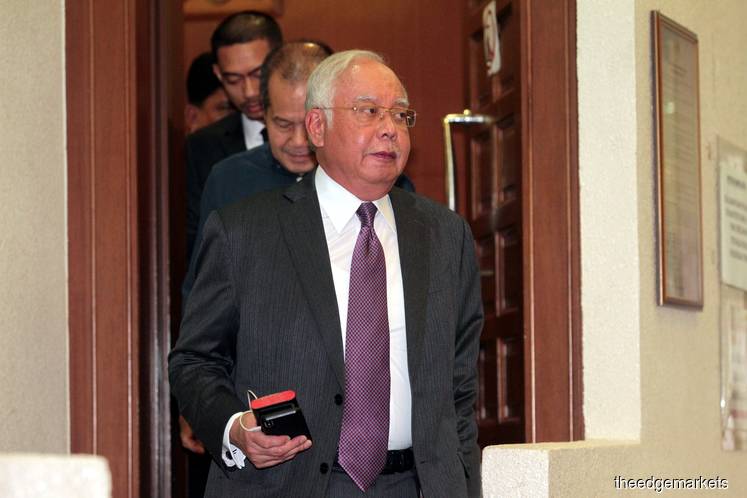 Najib at the Kuala Lumpur High Court this morning before the proceedings of his trial are postponed. (Photo by: Mohd Suhaimi Mohamed Yusuf/The Edge)

Najib's lawyer Wan Aizuddin Wan Mohammad had asked for an adjournment and told the court that Harvinderjit, who had been cross-examining former AmBank relationship liaison manager Joanna Yu Ging Ping, was sick.

"[Lead counsel] Tan Sri Muhammad Shafee Abdullah has another case at a High Court here which has to go on as Justice Su Geok Yiam is retiring at the end of this month," he said.

"For this reason, we sought an adjournment of today's proceedings."

This led Justice Mohd Nazlan Mohd Ghazali to ask whether there are no other lawyers who can conduct the cross-examination of the witness, to which Wan Aizuddin replied: "No, as lawyer Farhad Read is also unwell."

The judge also asked as to what happened to Najib's other lawyers, namely former solicitor general II Datuk Yusof Zainal Abiden, Datuk Kamarul Hisham Kamaruddin and S Devanandan, to which Wan Aizuddin replied he does not know.

Senior lawyer and appointed prosecutor Datuk V Sithambaram told the court that while the prosecution objects to the postponement, he had received a call from Harvinderjit this morning at 6.30am to say that he was unwell.

"We can replace today's date [with] Aug 9. The prosecution did not call any new witnesses as we expected the cross-examination of Yu will take the whole day.

"There is no time to call the new witnesses even for this afternoon as we expected to call them next week," Sithambaram added.

Hence, he said the prosecution leaves the matter to court.

With this, Justice Nazlan allowed for the adjournment and directed that it would continue tomorrow.

He also asked the defence to produce Harvinderjit's medical certificate tomorrow and directed the prosecution to put the other witnesses on standby should the defence not be able to continue with Yu's cross-examination tomorrow.

"The trial will also be done on Friday, Aug 9 for the whole day. The trial will resume tomorrow," he said before leaving for his chambers.

This is the first time the SRC trial had been postponed because some members of the defence team had fallen ill.

The trial was supposed to enter its 43rd day today.