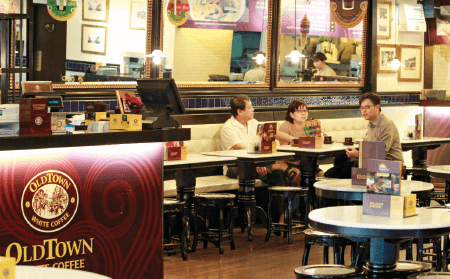 The SPA shall be conditional upon, among others, that GSF has secured all necessary operating licences (including the food production licence) to commence operations of central kitchen business at B02, Heng Keng Industrial District, Xiu Sheng Lu, He Ting Village, Ren He Town, Bai Yun District, Guangzhou, China.

On the same day, OldTown also entered into a conditional shareholders’ agreement with JD Group and AEC to set out the respective rights and obligations of the shareholders of AEC with respect to the organisation, management and operation of AEC, including the appointment of three OTL directors and two JD Group directors.

OldTown said the acquisition was due to the expansion of its KAP brand of cafe outlets in southern China, which will be dependent on the support of a centralised kitchen whose primal role would be to ensure that the products supplied to the café outlets meet the specifications and food safety standards of both the local authorities as well as the brand owner. KAP is a wholly-owned subsidiary of OldTown.

“The centralised kitchen will also allow for a more consistent delivery of quality products to the outlets while ensuring price efficiency due to consolidated procurement,” it said.

The acquisition will be funded via internally-generated funds and after the acquisition is completed, AEC will be an indirect subsidiary of OldTown, it said. The deal is expected to be completed in six months. OldTown closed up one sen at RM1.64 yesterday, giving it a market capitalisation of RM720.68 million.

This article first appeared in The Edge Financial Daily, on January 28, 2015