Outlook: Stay invested but be cautious 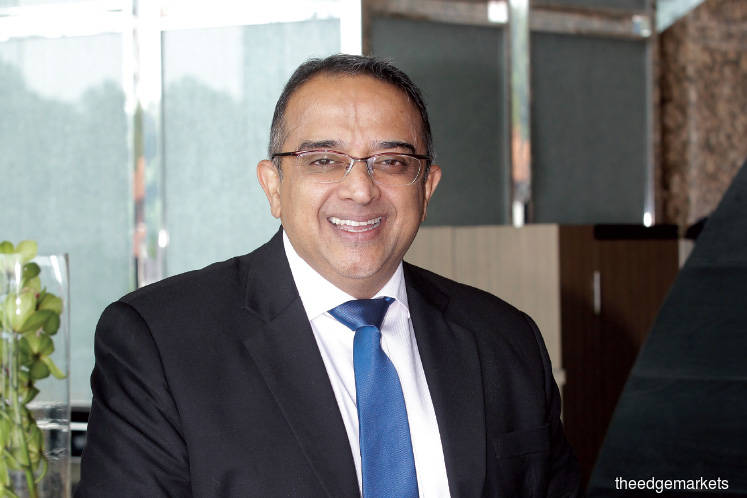 Investors will also have to recognise the fact that sharp pullbacks in financial markets actually present attractive buying opportunities. It is just that investors have to tread more carefully. This is not the time to take high conviction calls. - Menon Parts of the Nintendo Labo VR Kit headset, including ‘Toy-Con’ VR goggles (centre), at the product launch in April ... Nintendo is one of more than 50 companies contemplating moving its production out of China. Photo by Bloomberg

Headlines on the rocky progress made in the trade negotiations between the US and China have often rocked financial markets. This has made many investors anxious and even tempted to take their investments off the table.

But this is no reason to be all out bearish with one’s investments, says Vasu Menon, executive director of investment strategy and wealth management at OCBC Bank in Singapore. Instead, practise caution, he advises.

“The message is quite clear. Despite the fact that we have faced a lot of uncertainties due to the US-China trade war, Brexit and other political issues as well as concerns about a recession, the stock markets returned an average of 13%. Those are the kinds of returns you typically see in a whole year. So, there are still opportunities despite the uncertainties.”

US stock markets climbed to new highs last week on the back of better than expected second-quarter earnings of technology giants such as Alphabet Inc and Twitter Inc. The S&P 500 rose to 3,025.86 points, having broken the psychological barrier of 3,000 points a couple of weeks ago following US Federal Reserve chairman Jerome Powell’s comments on easing interest rates. The Dow Jones Industrial Average and Nasdaq Composite reached an all-time high of 27,192.45 and 8,330.21 points respectively on July 26.

However, US equities have since tumbled following a number of poor quarterly earnings reports. Market sentiment was further impacted when global stock markets edged lower on July 18 as a result of the ongoing trade dispute between the US and China as well as other geopolitical concerns. The trade conflict, which has dragged on for more than a year now, saw tariffs amounting to 25% placed on US$200 billion (RM825.95 billion) worth of Chinese products.

The prolonged tiff has had a grave effect on companies that rely on China’s manufacturing prowess. According to the Nikkei Asian Review, more than 50 global companies — including Apple Inc and Nintendo Co Ltd — have announced or are considering plans to move production out of China as US President Donald Trump has threatened to slap duties on another US$325 billion worth of goods.

“The uncertainties we are facing right now will not go away anytime soon. Investors just have to come to terms with the fact that this is the new ‘normal’ and navigate around the series of headwinds that we are facing,” says Menon.

“They will also have to recognise the fact that sharp pullbacks in financial markets actually present attractive buying opportunities. It is just that investors have to tread more carefully. This is not the time to take high conviction calls.”

That is because the biggest uncertainty of all — the seemingly unending trade war — is unlikely to be resolved any time soon. Menon points out that Trump’s presidency has been defined how the leader of the world’s largest economy handles trade talk with China.

“Trump used China to win the last election. He accused it of taking away jobs in 2016. But surveys show that Americans in general are still wary about China’s economic and military might,” he adds.

“Trump is playing to the tune of the voting population and China is not just the target of Republicans but also Democrats. One just has to listen closely to the speeches of Bernie Sanders, Elizabeth Warren and Nancy Pelosi. They are all anti-China in a way. In fact, they are egging Trump on because they too are sceptical about China and actually believe that the country is taking away jobs from the US.”

No end in sight

Menon says Washington’s mounting political pressure on China is an indication that “the problem is China is not a short-term story”. He points out that while the tensions have been dubbed a trade war, it is actually an exercise in reducing the trade imbalance between the two countries.

“In fact, it is more than a trade war because it is about containing China and curbing its supremacy, not only in the economic space but also the technology and military space,” he adds.

China has undoubtedly made tremendous headway in terms of technology, leapfrogging Western nations to the extent that its dominance in the space has become a bone of contention, says Menon. “It is far ahead of the US in launching 5G — the next generation of mobile internet connectivity — for one. In terms of military strength, it has made a lot of progress and with that it is causing territorial disputes in the South China Sea.

“Americans feel that if they do not contain China, they are bound to lose out. So, this is not just a trade war.”

But what happens if China retaliates? He believes that if the trade negotiations fall through and Trump imposes tariffs on the remaining imported goods from China, Beijing could resort to drastic measures as well.

“The Chinese have the means to retaliate. They are not pushovers. For example, many US companies sell more than US$200 billion worth of goods and services to China. The Chinese could put obstacles in place to prevent those companies from doing sales.

“At the same time, Beijing could dish out billions of dollars’ worth of contracts to foreigners and stop the Americans from participating. China accounts for more than 95% of the world’s production of rare earths, so that could impact a lot of US companies in the defence and technology sectors as they depend on the mineral.

“China also holds a lot of US Treasury bonds. So, it could either not buy anymore or start reducing its holdings. Those would be ‘nuclear’ options.”

The US federal budget deficit for fiscal year 2020 is US$1.1 trillion, he points out, adding that Washington needs the support of the Chinese as Trump plans to cut taxes even more. “The US is funding its budget deficit issuing bonds. It is a debt-based financial deficit and the Chinese are the biggest purchasers of this debt.

“All these tactics will hurt business sentiment globally because companies that are looking to invest large amounts of money in projects with long gestation periods will just have to put their financing plans on hold because they do not know where this scenario is headed. The world is looking like a very uncertain place.”

Menon says the US central bank’s decision to stop interest rate hikes and even lower its policy rate has “been a saving grace” as the move has helped equities and high-yield bonds. “The Fed is like Robin Hood and the two villains are Xi and Trump.”

He believes that the Fed’s decision is the reason a US recession is not on the cards at the moment. While the regulator may not be able to stave off a recession forever, it still has some “ammunition” in the form of interest rates to keep markets vibrant over the next 12 months.

“Surveys and economic indicators point to a slowdown, partly because of the trade war and partly because there has been a long period of economic expansion in the US. The momentum is starting to wane a little, but there are no overt signs of a recession,” says Menon.

“If you look at the forecast made the New York Federal Reserve Bank on the probability of a recession, its model of forecasting has been quite vigorous and accurate in predicting a recession. It indicates that the chance of a recession is only 29% at this juncture.

“The unemployment rate in the US is the lowest since the 1960s. Usually, before a recession, there are job losses. But the US economy is still adding jobs and wage growth is still strong at close to 3%. These are tell-tale signs that analysts rely on and they are not pointing at a recession, just slowdown.

“This is the longest economic cycle in 10 years and we are now at the 9½-year mark. That is why investors are jittery. Looking at the past cycle, many feel that it is about time we have a recession. But the difference this time around is that central banks globally are ready to cut interest rates and provide a backstop.

“We do not see a recession in the next 12 months. But beyond that, it is hard to say.”

However, there will come a time when central banks will not be able to continue their loose monetary policies. “They cannot maintain this stance forever, but I do not see how they can take their foot off the pedal at the moment,” says Menon.

“If a recession does hit in a few years, the central banks will have very limited levers to tackle it. Usually when a recession happens, interest rates are lofty. So, you have room to cut interest rates. But if you have already cut rates and a recession sets in, what else can you do?”

The discontent between the US and China and worries of a recession are not the only concerns on investors’ minds. The US’ problems with Japan and export-centric countries in Europe are far from resolved, says Menon.

In May, Trump decided to delay the decision to impose tariffs on European and Japanese automakers for six months, saying that these nations have reaped unfair advantages from trade treaties. However, if these negotiations do not pan out positively, it will exacerbate the negative investor sentiment.

Other simmering geopolitical issues affecting investments are doubts about German Chancellor Angela Merkel’s ability to see through her fourth term in office that ends in 2021, stonewalled Brexit discussions and the expiry of European Central Bank president Mario Draghi’s term in October.

“If the person who takes over from Draghi turns out to be a hawkish central bank chief, then it is definitely bad news. Markets will start to worry that this person backtracks on what has been promised Draghi, who has been very good for the markets as he has adopted a loose monetary policy,” says Menon.

He adds that it is for these reasons that it is not a good time to be heavily invested in any one segment and recommends that investors stay diversified.

Menon says valuations in the technology sector indicate that there are a lot of opportunities. But seeing that these companies are likely to find themselves in the crossfire between the US and China, going all out in this sector may be more harmful than good.

“So, even if you want to be positive on technology in the long term, the problem is that some of these headwinds make it difficult to be overly positive. You want to be careful. You want to buy, but not overbuy, in just that sector,” he says.

“Asian markets may see a pullback more than other markets given the trade war. [If that is the case,] do you use that as an opportunity to put all of your money in China or Asia? I do not think so. We need to be careful and not over-participate. At the same time, holding cash and being disengaged from the market is not a good move either.”

Menon points out that many investors disposed of their holdings when the US stock markets corrected almost 20% at the end of last year. “Many investors were fleeing the markets even though the markets were seeing huge gains. This goes to show that timing the market precisely is almost impossible and it is best to stay diversified.”