Parliament to decide on the National Budget today 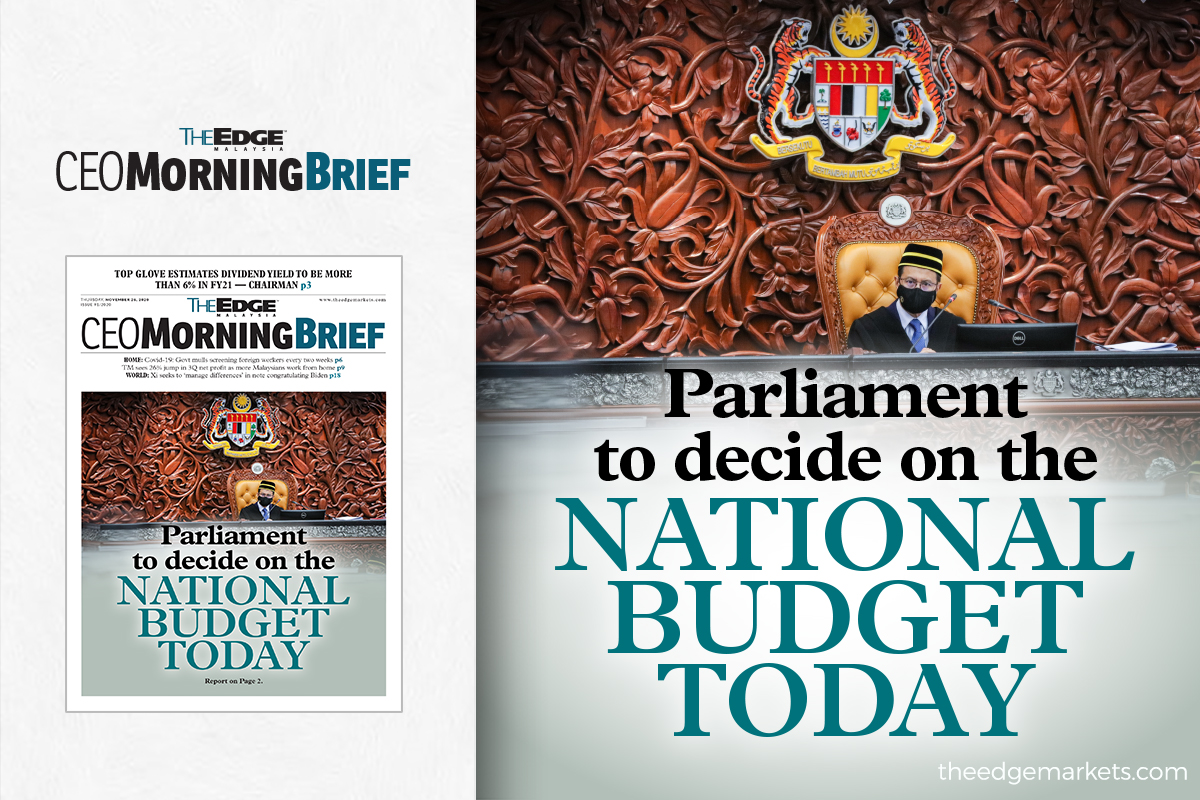 KUALA LUMPUR (Nov 26): The crucial vote on Budget 2021 is scheduled for today in the Dewan Rakyat amid uncertainty as to whether it will garner sufficient support from lawmakers.

Several MPs have threatened to withhold support for the Budget unless their concerns are addressed. Former Prime Minister Tun Dr Mahathir Mohamad (Pejuang-Langkawi), for one, has said that he and “his friends” have decided to reject the Budget.

“My friends and I have taken the stand to reject Budget 2021 and we do that with a full sense of responsibility and the trust that we hold on behalf of the people until the end of our term as the people’s representatives,” Dr Mahathir said in a blog post yesterday.

He did not name the friends but it is expected to include fellow Pejuang lawmakers — Datuk Seri Mukhriz Mahathir (Jerlun), Datuk Amiruddin Hamzah (Kubang Pasu) and Datuk Shahruddin Md Salleh (Sri Gading).

Ministers and Deputy Ministers from Barisan Nasional have pledged their full support to the leadership of Prime Minister Tan Sri Muhyiddin Yassin in implementing the plan for economic recovery and people’s health, noting that the first move is to render it achievable by ensuring Budget 2021 is supported and passed by MPs.

UOB Malaysia's senior economist Julia Goh expressed the hope that the lawmakers are able to “bridge differences, unite and pass the Budget".

"There are many signs the recovery has retraced or weakened in the fourth quarter with the resurgence in Covid-19 infections and Conditional Movement Control Order.

“Concerns are rising that this could drag into 1Q 2021. Without the Budget and additional fiscal reinforcements, the outlook would be more dire," she said.

Wong Chen (PKR-Subang) said voting on the Budget will likely proceed today as a postponement is unlikely, adding that time in Parliament is “actually a non-factor”.

Wong said it is the norm for parliamentary proceedings to over-run the allotted time, with the Speaker able to “stop the clock” until the debates are concluded.

“We have debated until 5am in the morning previously under Speaker Tan Sri Pandikar Amin Mulia. The current speaker may take a different view but if he tries to cut short and postpone the debates, you can expect Opposition MPs to challenge him,” he told The Edge.

“I think [the voting] will happen — there is no political requirement to prolong this as most, if not all, MPs have decided how to vote,” added Wong, who is expecting a full house in Parliament today.

When asked how he will be voting, Wong replied: “Just wait and see.”

Besides postponement, which Wong said is unlikely, there are only two other scenarios: either the Budget is passed or not passed.

The voting will be done by a simple majority of the MPs present in Parliament. For example, if there are 100 MPs, a total of 51 votes will be needed.

Malaysia has 222 Parliamentary seats but currently there are only 220 MPs (following the deaths of Datuk Liew Vui Keong (Warisan-Batu Sapi) on Oct 2 and Datuk Hasbullah Osman (BN-Gerik) on Nov 16) and if all of them take part in the voting session, a minimum of 111 votes is required for the Budget to be passed.

Dr Mahathir, in his blog post, said if Budget 2021 is not passed, it would prove that the government of day has lost its legitimacy to govern because it does not have sufficient majority to have the Budget passed. And as such, the Prime Minister should resign if he is someone with dignity, the former premier said.

Wong agreed, saying that in the event the Budget is not passed, the Prime Minister has to resign and the Government dissolved as per the Westminster parliamentary convention.

He explained that there is no time constraint on the formation of a new Government, but the King can choose to call a General Election if there are difficulties in forming a Government, although he said this is unlikely given the current pandemic.

“Politicians will sort this out quickly, since it’s about power,” he said.

Speculation had been rife that there could be a deferment in the Budget voting in the lead up to “the day” today given that there are still a number of Ministers yet to debate and that proceedings have been cut short to end at 2pm every day prior to yesterday to minimise the risk of Covid-19.

Yesterday, de facto Law Minister Datuk Takiyuddin Hassan announced that the Dewan Rakyat sitting for the day will be extended to 3pm.

There were about 18 Ministries yet to debate as of yesterday morning in Parliament before the Minister of Finance Tengku Datuk Seri Zafrul Abdul Aziz is scheduled to speak on the winding up of the budget today.

By end of the day yesterday, 10 Ministries had completed leaving nine more to debate today.

A source told The Edge yesterday morning that at that point in time, the schedule for the crucial Budget 2021 vote set for today is on track.