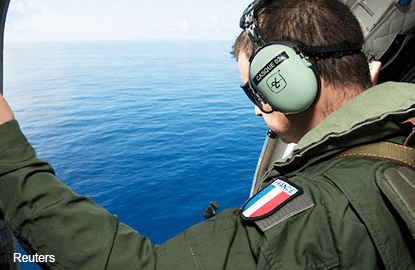 (Nov 11): Malaysia Airlines flight MH370 may be found in the next four weeks based on a mathematical formula produced by a pilot, UK’s Daily Express reported.

The pilot, Captain Simon Hardy who was said to have more than 17 years of flying experience on Asian routes, said that he has developed a “detailed mathematical and geometric calculation” which could indicate where MH370 crashed.

The daily reported that Hardy’s formula puts the coordinates as S39 22' 46" E087 6' 20”, just to the bottom of South Africa, the southern tip of Australia and south east of a French island in the southern Indian Ocean.

The coordinates was said to be at the extreme capabilities of the Boeing 777’s range and was just beyond the widened search area of 120,000sq km.

On July 29, a part of the plane known as a flaperon was found on the French island of Reunion. The discovery had sparked hopes that the rest of the aircraft would soon be located.

However, there has been no further trace of debris despite the most expensive search operation in aviation history.

Earlier this year, reports said Malaysia and Australia were expected to share the A$50 million (RM141 million) cost of extending the search for MH370 if the plane was not found in the first 60,000sq km search zone in the Indian Ocean.

At least US$44 million (RM143.55 million) was spent on the deployment of military ships and aircraft in the Indian Ocean and South China Sea in the first month of the search, about the same as was spent on the whole underwater search for Air France's flight AF447, which crashed into the Mid-Atlantic in 2009. – The Malaysian Insider