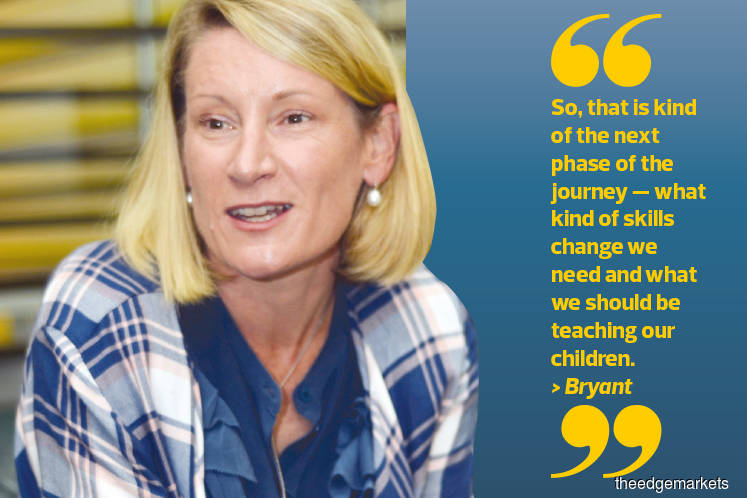 As digital disruption transforms how companies do business, they will have to seriously overhaul the way they go about procuring goods and services. But things will evolve rather than change overnight despite the fact that we are living in a transformative age, says Liz Bryant, managed services leader at EY Asia-Pacific.

“Things are accelerating, absolutely, but it is sort of an evolution rather than a transformation because you are adding features, functionality. You have new tool sets and technology is evolving all the time,” she adds.

Bryant, who is from Australia, spoke to Enterprise in Kuala Lumpur recently.

While the changes in the procurement space have been exponential, she points out that these are not taking place overnight. “Which is a good thing because it allows us to think about the really important things such as how we transition skills and how we think about the skills we need for the future in our schools and educational institutions.”

Bryant says the danger is that no one is thinking about these things in any real sense at the moment. “So, that is kind of the next phase of the journey — what kind of skills change we need and what we should be teaching our children. There are a lot of conversations about this in different markets, but I do not think that has translated into something concrete.

“But more important is what we are doing with people now, as the work they do changes, as their roles change. Where could they be working in the organisation and what skills do they need for that?

“We have the time but people do not necessarily understand what the journey towards transformation looks like.”

One of the major themes developing in the procurement industry is its changing role. “About 20 years ago, it was all about fulfilment — that is, getting things for when you need them. Many organisations have begun to realise that when you make these decisions, there is a better strategy to employ. So, that was another layer of evolution,” she says.

“And now, there is a third layer with digital enablement. You need to look at what digital transformation means for you in terms of procurement and how it changes the function of the way you do things.”

The problem is that while most organisations are data-rich today, the data tend to sit in enterprise resource planning (ERP) systems, Excel spreadsheets or contract databases. “Digital transformation is about making sense of this data so it can provide insights into your business. And there are a lot of techniques you can employ to do that,” says Bryant.

“There is machine learning, artificial intelligence (AI) obviously, and you can start to move from there. Then, there is base level automation. But the real transformation comes from changing people from data gatherers to being able to act upon insights from the data that is presented to them.”

She is talking about using data in a predictive manner. “Predictive is certainly the next layer, but we are not there yet. There are certainly some predictive techniques being used in some areas involving risk,” she says.

Bryant explains that this means looking at a variety of variables to predict where certain vendor risks may lie. “That is sort of one of the early areas. But if you think about it, a role in procurement is often that of a category manager and that is considered quite a strategic role.

“But we would argue that probably 80% of the role is trying to pull together all these disparate sources of data from the different systems. Then they only have 20% of their time left to actually make some sense of that.”

She suggests the use of intuitive interfaces that can channel data from different parts of the organisation, interpret the data and present it to the manager. “This allows you to shift that balance from data gathering to acting upon insights and that has a huge productivity dividend for any economy, if we look at it on a macro scale,” she says.

One area that is ripe for transformation in the procurement sector is its vulnerability to bribery and corruption. “One of the things we have realised, and the data supports it, is that corruption creates inefficiency. So, in a sense, it is not a great business decision for organisations or countries because if it is a corrupt process, intentional or otherwise, it means you may not be getting the best provider or the best price,” says Bryant.

That is why governments are working together to stamp it out. “The Organisation for Economic Cooperation and Development member countries came together and they now have a framework for dealing with bribery and corruption. That is a big focus,” she says.

First, they battled corruption by putting a lot of people on it. But the fight against corruption in procurement has evolved and is now being fought using technological weapons.

“There is a great technology for transaction monitoring, not only for the financial services sector but also for the larger global manufacturing organisations, that looks for patterns that may indicate bribery has occurred,” says Bryant.

She says EY has already started to use some of these tools for a number of its clients. Some organisations have started to embed their risk framework so they can continuously monitor such transactions.

“And that is a huge change. Technology will play a big part in dealing with bribery and corruption,” she adds.

But not all technology solutions have to be expensive and complicated. “Social media, for instance, has been a huge tool that provides quite a large amount of consumer protection because you can find information on suppliers or companies that you may want to interact with,” says Bryant.

“One would argue that consumers are in a much more powerful position than they ever were because there is a lot more choice in a lot of instances and because the ability to access information on what they may be buying or consuming is much greater. And the ability to give feedback on poor service or poorly built things is also much greater.”

But social media has also opened up the possibility of abuse with false negative or positive reviews. Again, there is technology out there to deal with this, says Bryant. “What technology can do is assess whether there are false positives or false negatives being spat out. If you want to use a particular supplier, you will get data from a whole bunch of disparate sources and the next layer of scrutiny is where you look at patterns of feedback, social media activity or media coverage.”

Blockchain is one of the technologies being applied to ensure greater transparency. “There are good examples of blockchain being used in a number of areas, particularly around where you need surety of supply and you need to understand where things come from,” she says.

“EY has one in the wine industry, which we look at to make sure you can guarantee quality and where the wine has come from. So, it is a guarantee of origin.”

This is one of its use cases. “You can have a technology, but you need to bring it down to a use case level for it to be truly meaningful. Otherwise, you are just talking about the latest fad.”

But there is another aspect to procurement that people usually do not talk about and that is the fact that as turnover or churn rates rise, it becomes even more important to simplify procurement processes. “Training manuals are fine if you are keeping someone for 5 to 10 years. But when you have people moving through your organisation very quickly, you will need to have intuitive systems that you can work out the same way you work out how to use your smartphone,” she says.

“A really big part of digital enablement is how you make those systems intuitive so you can handle churn and flux in your organisation because that will be huge. People move through organisations very quickly now, quicker than ever before.”

Because of the high churn rates, many organisations are now opting to crowdsource certain functions rather than have them in-house. “So, you may have a job which you post on a number of platforms and people bid for it. You can look at their qualifications and reviews before awarding the job to them,” says Bryant.

She adds that a growing number of medium and large organisations are doing this rather than taking the historical ‘let’s appoint an agency and have a master services agreement’ approach. “Now, they are doing it more tactically.”

This is a great example of how organisations are procuring goods and services differently from the way they did before, says Bryant. “They are shifting to take advantage of the gig economy. And that is also where you have a flourish of really creative small and medium enterprises that are suddenly able to interact and do work for really large organisations.”

Is this crowdsourcing? “That is probably a crude way of putting it. But that ability to put work out to organisations, have people bid for it and assess the quality of their work has made a huge difference to the way we procure a lot of goods and services.”