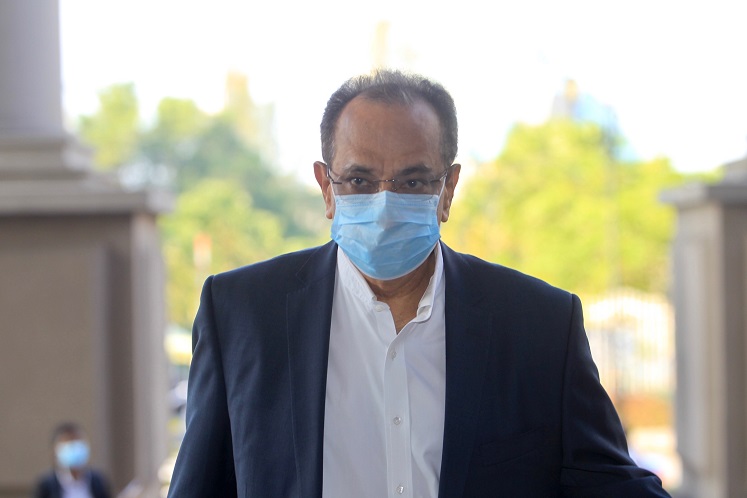 Sithambaram: If there was evidence that See did not have the power to approve these transactions or the money didn’t go through then we would have called her, but the money had gone through. (Photo by Shahrin Yahya/The Edge)

KUALA LUMPUR (June 3): The prosecution at the SRC International Sdn Bhd trial explained that they did not need to call SRC’s chief financial officer (CFO) See Yoke Peng as a witness to verify that she had approved the transfer of hundreds of millions of ringgit out of the company as other witnesses had already verified this fact.

Explaining to Justice Nazlan Mohd Ghazali, appointed prosecutor Datuk V Sithambaram (pictured) said they did not need to call See as SRC director Datuk Suboh Md Yassin, who was a signatory for the company, had signed off on funds which were transferred out of SRC and eventually ended up in the personal accounts of Datuk Seri Najib Abdul Razak.

Justice Nazlan had asked Sithambaram why the prosecution had decided not to call See to take the stand as she had given the green light to the bank to carry out these transactions.

Suboh, who was a witness in the case last year, had testified in court that his signatures were forged, copied and abused by SRC’s former managing director Nik Faisal Ariff Kamil to enable the electronic transfers from SRC into other subsidiaries and eventually into Najib’s accounts.

Sithambaram, however, did not choose to acknowledge the forgery claims as he explained that at the material time, no one at SRC had questioned these transactions, including Suboh.

“As far as the prosecution is concerned, we called Suboh, although we had problems with his evidence, our case is the signatures belong to them (Suboh and Nik Faisal).

“The CFO approved it and the bank then acted on it. The CFO (See) calls the bank and confirms that it is indeed SRC who are making these transactions,” Sithambaram explained while delivering his oral submissions at the trial today.

He added that this was sufficient enough for the prosecution to form the inference that Najib was a key player in SRC, therefore no one, including See, questioned these transactions.

Sithambaram also added that there was no need to call See as there was no dispute that these transactions had gone through, based on various witness testimonies.

“If there was evidence that See did not have the power to approve these transactions or the money didn’t go through then we would have called her, but the money had gone through,” he said.

Yesterday, Najib’s defence lawyer Harvinderjit Singh told the court that the prosecution has left a big gap in their case by not putting See on the stand to verify that she had approved these transactions.

He said the prosecution should have called See to verify the testimony from AmBank relationship liaison manager Joanna Yu Ging Ping, who had alleged that fugitive financier Jho Low and former SRC chief executive officer Nik Faisal Ariff Kamil were the masterminds behind these transactions.

"All these things she said Jho Low and Nik Faisal had done, it is all inconclusive unless they have primary evidence, they could have called See for this," he said.

Former AmBank relationship manager Krystle Yap Wy-Sze, who was a subpoenaed witness for the defence, testified in February that she also dealt with 1Malaysia Development Bhd executive director of finance Terence Geh and See in matters relating to SRC and its subsidiary Gandingan Mentari Sdn Bhd, as both were her corporate clients, and she had acted on their instructions.

Najib is facing criminal breach of trust and money-laundering charges involving transfers of RM42 million SRC funds into his accounts.