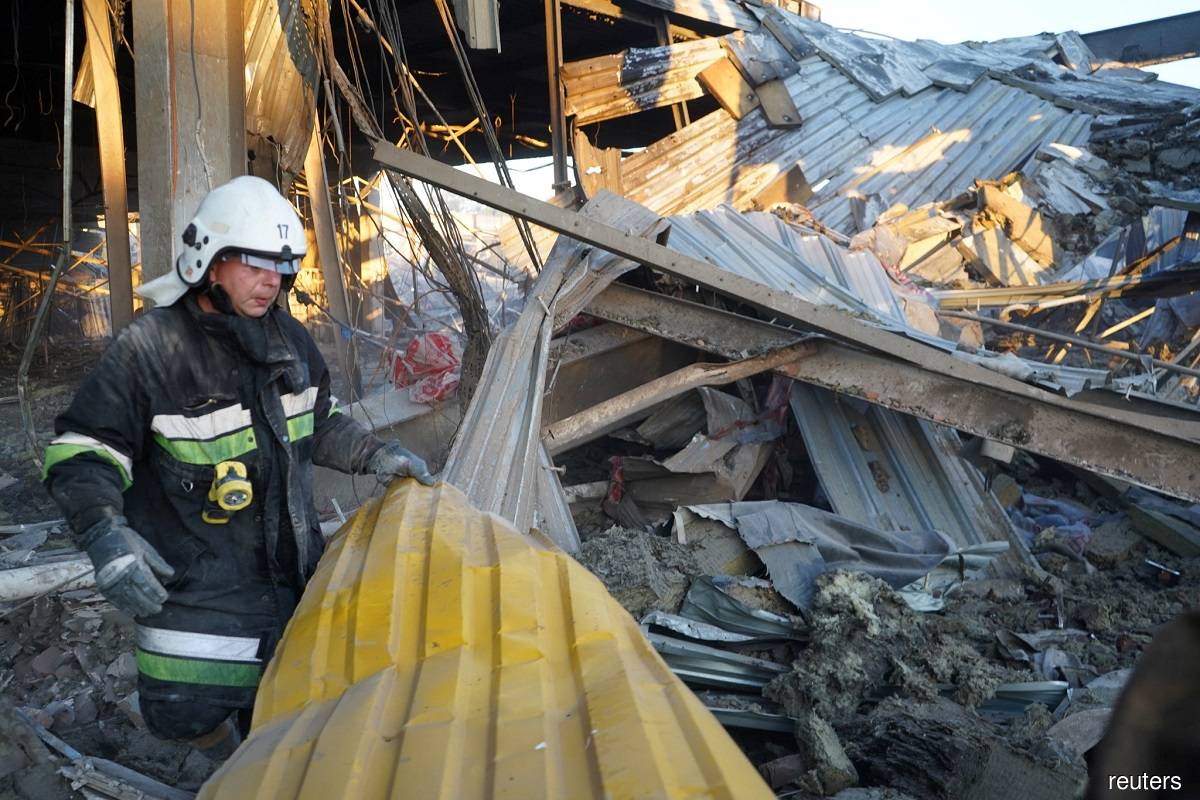 A rescuer works at a site of a shopping mall hit by a Russian missile strike, as Russia's attack on Ukraine continues, in Kremenchuk, in Poltava region, Ukraine, in this handout picture released June 28, 2022. Press service of the State Emergency Service of Ukraine/Handout via Reuters

KREMENCHUK, Ukraine (June 28): Firefighters and soldiers searched on Tuesday for survivors in the rubble of a shopping mall in central Ukraine after a Russian missile strike killed at least 18 people in an attack condemned by the United Nations and the West.

Family members of the missing lined up at a hotel across the street where rescue workers set up a base after Monday's strike on the busy mall in Kremenchuk, in the region of Poltava, southeast of Kyiv.

More than 1,000 people were inside when two Russian missiles slammed into the mall, Ukrainian President Volodymyr Zelenskiy said. At least 18 people were killed and 25 hospitalised, while about 36 were missing, said Dmytro Lunin, governor of Poltava.

Leaders of the Group of Seven (G7) major democracies, at a summit in Germany, said the attack was "abominable".

"Russian President Putin and those responsible will be held to account," they said in a joint statement.

Zelenskiy said in a Monday evening video address that it was "not an accidental hit, this is a calculated Russian strike exactly onto this shopping centre".

A survivor receiving treatment at Kremenchuk's public hospital, Ludmyla Mykhailets, 43, said she was shopping with her husband when the blast threw her into the air.

"I flew head first and splinters hit my body. The whole place was collapsing," she said.

"It was hell," added her husband, Mykola, 45, blood seeping through a bandage around his head.

Russia has not commented on the strike but its deputy ambassador to the United Nations, Dmitry Polyanskiy, accused Ukraine of using the incident to gain sympathy ahead of a June 28-30 summit of the NATO military alliance.

"One should wait for what our Ministry of Defence will say, but there are too many striking discrepancies already," Polyanskiy wrote on Twitter.

Elsewhere on the battlefield, Ukraine endured another difficult day following the loss of the now-ruined city of Sievierodonetsk after weeks of bombardment and street fighting.

Lysychansk is the last big city held by Ukraine in eastern Luhansk province, a main target for the Kremlin after Russian troops failed to take the capital, Kyiv, early in the war.

Eight residents including a child were killed and 21 wounded by shelling when they gathered to get some drinking water in Lysychansk on Monday, Luhansk Governor Serhiy Gaidai said.

Ukrainian forces controlled the city but its loss was possible as Russia poured resources into the fight, he added.

"They really want this and a lot of reserves are being thrown just for this ... We do not need to lose an army for the sake of one city," he told Reuters in an interview.

Rodion Miroshnik, the ambassador to Moscow of the separatist Luhansk People's Republic, said Russian troops and their Luhansk Republic allies were advancing westward into Lysychansk and street battles had erupted around the city's stadium.

Fighting was going on in several villages around the city, and Russian and allied troops had entered the Lysychansk oil refinery where Ukrainian troops were concentrated, Miroshnik said on his Telegram channel.

Reuters could not confirm Russian reports that Moscow's troops had already entered the city.

Russia also shelled the city of Kharkiv in northeast Ukraine on Monday, hitting apartment buildings and a primary school, the regional governor said.

The shelling killed five people and wounded 22. There were children among the wounded, the governor said.

'As long as it takes'

Moscow denies targeting civilians in what it calls a "special military operation" in Ukraine, but Kyiv and the West have accused Russian forces of war crimes.

During their summit in Germany, G7 leaders vowed to stand with Ukraine "for as long as it takes" and tighten the squeeze on Russia's finances with new sanctions that include a proposal to cap the price of Russian oil.

Zelenskiy asked for more arms in a video address to G7 leaders, US and European officials said. He also requested help to export grain and for more sanctions on Russia.

The White House said Russia had defaulted on its external debt for the first time in more than a century as sanctions have effectively cut the country off from global finance.

Russia rejected that, telling investors to go to Western financial agents for the cash, which was sent but bondholders did not receive.