Russia kills 18 with missiles near Odesa after abandoning Snake Island 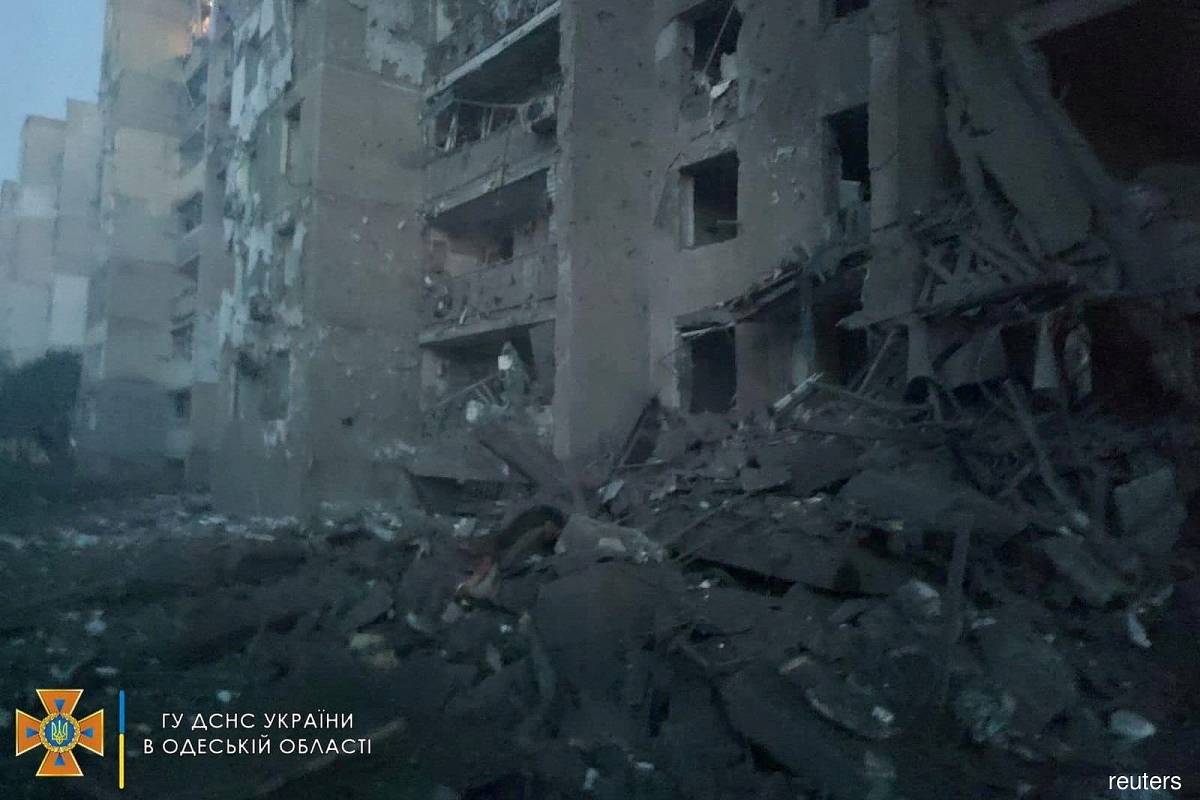 A general view shows the aftermath of a missile strike at a location given as Serhiivka village, Bilhorod-Dnistrovskyi district, Odesa region, Ukraine, in this handout image released July 1, 2022. State Emergency Services of Ukraine/Handout via Reuters

KYIV (July 1): Russia rained missiles down near Ukraine's Black Sea port of Odesa on Friday, hitting an apartment building and a resort and killing at least 18 people, hours after its troops were driven off the nearby outcrop of Snake Island.

Ukrainian firefighters were combing the rubble of a wrecked apartment building looking for survivors, images released by the Ukrainian emergency services showed.

Thousands of civilians have been killed since Russia invaded Ukraine on Feb 24 in what Ukraine says is an unprovoked war of aggression. Russia denies targeting civilians in what it calls a "special operation" to root out nationalists.

A day earlier, Russia pulled its troops off Snake Island, a desolate but strategically important outcrop that it seized on the war's first day and has used to control the northeastern Black Sea, where it has blockaded Odesa and other ports.

In his nightly video address, President Volodymyr Zelenskiy hailed what he described as a strategic victory.

"It does not yet guarantee security. It does not yet ensure that the enemy will not come back," he said. "But this significantly limits the actions of the occupiers. Step by step, we will push them back from our sea, our land and our sky."

In eastern Ukraine, where Russia is pressing its main ground offensive, Ukrainian forces were holding on to the city of Lysychansk, although officials described it as under ferocious artillery attack.

In Kyiv, Ukrainian lawmakers gave a standing ovation as the flag of the European Union was carried through the chamber to stand alongside Ukraine's own flag behind the dais, a symbol of Ukraine's formal EU candidate status granted last week.

The strike on Odesa, using long-range missiles, comes after days in which Russia has dramatically escalated such attacks deep in Ukraine, far from front lines, including an attack last week that killed at least 19 people in a crowded shopping mall.

Moscow says it is striking military targets. Kyiv calls the attacks war crimes. A Ukrainian general said on Thursday that Russia may be trying to hit military targets but is killing civilians by firing inaccurate, obsolete missiles into populous areas.

Most of those killed on Friday were asleep in an apartment building in the village of Serhiivka in the Bilhorod-Dnistrovskyi district at about 1am when a missile struck. Video images showed huge destruction as firefighters battled the blaze and combed the rubble.

Odesa region emergency official Ihor Budalenko told local television 41 people had been rescued. Workers were searching for others who might be trapped in the building where 152 lived.

Zelenskiy and lawmakers in parliament stood for a minute of silence for those killed. Reuters could not independently confirm details of the attacks.

Russia has focused its main ground campaign on the east, where it demands Kyiv cede full control of two provinces to pro-Russian separatist proxies.

Moscow has been on the verge of capturing one of those provinces, Luhansk, since taking the city of Sievierodonetsk last week after some of the heaviest fighting of the war. Ukraine's last bastion in Luhansk is the city of Lysychansk across the Siverskyi Donets river, which is close to being encircled under relentless Russian artillery assault.

"The superiority in fire power of the occupiers is still very much in evidence," Zelenskiy said. "They have simply brought in all their reserves to hit us."

In Russian-occupied Sievierodonetsk, residents have emerged from basements to sift through the rubble of their city.

"Almost all the city infrastructure is destroyed. We are living without gas, electricity, and water since May," Sergei Oleinik, 65, told Reuters. "We are glad that this ended, and soon maybe reconstruction will start, and we will be back to more or less normal life."

The Ukrainian victory at Snake Island is a major success — it has become a national symbol since the first day of the war when a Ukrainian guard ordered by Russia to surrender radioed back: "Russian warship, go fuck yourself."

Russia has used its control of the sea to impose a blockade on Ukraine, one of the world's biggest grain exporters, threatening to shatter Ukraine's economy and cause global famine. Moscow denies it is to blame for a food crisis, which it says is caused by Western sanctions and Ukrainian sea mines.

Pushing the Russians off Snake Island could be a step towards reopening Odesa's port, although military analysts say Russia could still threaten cargo ships at sea.

Despite yielding ground and taking punishing losses in the eastern Donbas in recent weeks, Ukraine hopes to inflict enough damage to exhaust Russia's advancing army, and turn the tide in coming months with advanced weapons arriving from the West.

The United States announced a further US$800 million in weapons and military aid. US President Joe Biden, speaking after a NATO summit in Madrid, said America and its allies were united in standing up to Russian President Vladimir Putin.

"I don't know how it's going to end, but it will not end with Russia defeating Ukraine," Biden told a news conference. "We are going to support Ukraine for as long as it takes."